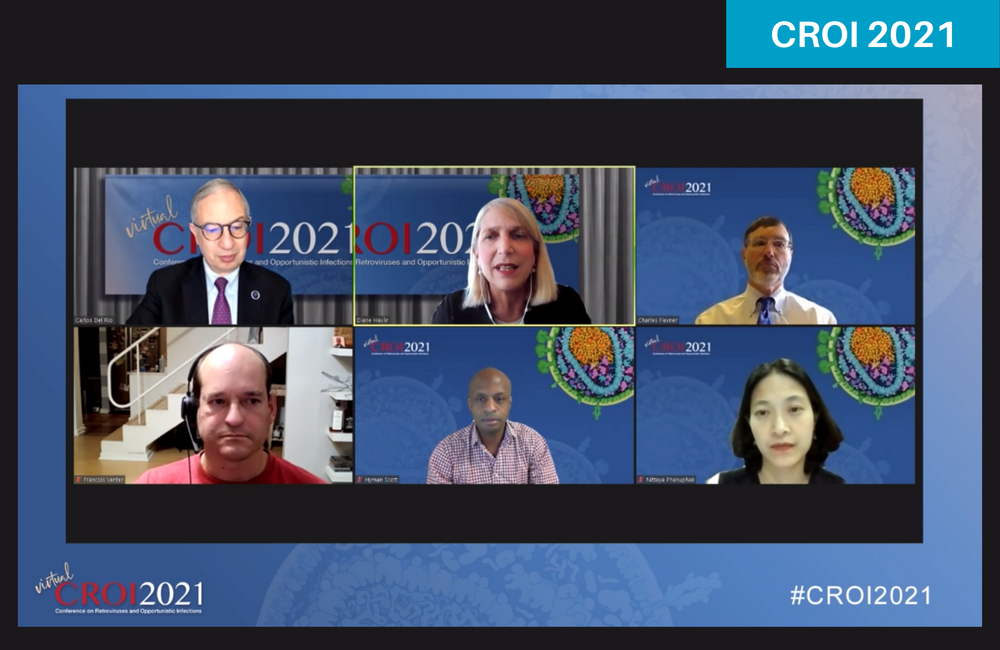 HIV treatment advances in the last decade were dominated by potent integrase inhibitors and single-tablet regimens, but the next decade promises to be an era of long-acting products, Professor Diane Havlir said at a panel discussion at the Conference on Retroviruses and Opportunistic Infections (CROI 2021) last week.

While attention is currently focused on injectable cabotegravir/rilpivirine for treatment (already approved by regulators in North America and Europe) and injectable cabotegravir for prevention (likely to be approved soon), other long-acting products have been developed or are in the pipeline. The monthly dapivirine vaginal ring for prevention is already approved (and versions that last for three months or which also provide contraception are being worked on). The new agent lenacapavir is being trialled as a six-monthly injection, while islatravir has such persistence in the body that it may work as a monthly pill or an implant lasting a full year.

For HIV prevention, just one long-acting agent might be enough to provide protection, but for HIV treatment, two or three are likely to be necessary. Constructing complete regimens of very long-acting agents will be challenging until multiple products which are efficacious for the same duration are available.

For example, ibalizumab is already available as an infusion every two weeks for treatment of multidrug-resistant HIV, but must be taken in combination with daily tablets, so does not have the qualities that many people find attractive in a long-acting regimen – less frequent dosing, less frequent reminders of HIV status, and greater discretion.

For Dr Hyman Scott, having long-acting products as additional options in his San Francisco clinics will allow him to reach people who have challenges with daily dosing. The experience from contraception and antipsychotic medications is that having more options allows clinicians to engage with individuals who have barriers to daily pill adherence.

Professor Francois Venter was less convinced that people who have difficulties taking medication every day will reliably attend appointments every four or eight weeks. Injectable antiretrovirals are not “the magic bullet for adherence” he said. “Initially and until we have better data, I will reserve this for the most adherent patients”.

Secondly, people who have challenges with daily adherence. He was not as concerned as Venter about these patients’ ability to regularly attend appointments. “I have many patients who are adherent to their visits without being adherent to their daily pills,” he said. Injectable medication could be offered at the same time as a person’s visit for other services, such as case management.

Pricing will be a key factor determining how many people are able to use long-acting products. In the US, injectable cabotegravir/rilpivirine for treatment has been positioned at the top end of the price range for branded one-pill-a-day regimens, but not with the same price premium as drugs to treat multidrug-resistant HIV.

We don’t know how cabotegravir for prevention will be priced, but it will be compared with oral PrEP, which is highly effective and available at much lower cost from generic manufacturers. A study presented at CROI found that to be considered cost effective by health systems, a long-acting product could only be around $3000 a year more expensive than generic tenofovir/emtricitabine in the US. In Europe, where generic drugs are less expensive, the price would have to be lower still.

How feasible will it be to deliver long-acting agents in low- and middle-income countries? Francois Venter said that in South Africa there is great enthusiasm from patients, while healthcare providers have more concerns about operational challenges. The workflow of already-overburdened clinics will have to be rethought, or alternative service providers, like commercial pharmacies, will need to be identified.

While the country has a large programme delivering injectable contraceptives, the experience is that patients do cycle in and out of care. This raises concerns about the emergence of drug resistance, which makes the need to bring individuals back into care even more urgent. However, programmes have no track record of doing this well.

Injectable treatments would be a “complicated intervention” to replace South Africa’s successful antiretroviral therapy programme, which is the largest in the world. Venter was more open to the potential benefits of injectable PrEP, given the limited numbers who have been reached by oral PrEP so far.

The success of Thailand’s scale-up of oral PrEP has rested on key population-led services, in which community health workers (primarily men who have sex with men and transgender women) deliver PrEP to their peers, often in non-medical settings. Dr Nittaya Phanuphak said implementation research is needed to find out whether long-acting agents can be delivered by lay providers. Products which could be administered by a peer or the user themselves would be welcome, she said. However, as cabotegravir and rilpivirine must be injected into a muscle large enough to take the required volume, the buttocks are currently the only feasible site and licensing has specified administration by a healthcare professional.

An additional concern is that many transgender women have had injections of soft tissue fillers in the buttocks. “If we can’t find any other muscle group, this will automatically exclude transgender women from getting injectable cabotegravir,” Phanuphak said.

The lead in and the long tail

Specifically for cabotegravir and rilpivirine, some of the emerging data will allow some protocols to be simplified, while other data may introduce new complexity.

Used as prevention, cabotegravir is dosed every eight weeks. Used as treatment, cabotegravir/rilpivirine has been tested with both dosing every four weeks (approved by both US and European regulators) and every eight weeks (only approved by European regulators). Data presented at CROI showed eight-week dosing to be non-inferior, but it is likely to be less forgiving of late doses. Also, the analyses so far provide little guidance on which patients are most likely to benefit from each regimen.

"While there are some operational challenges and details which need to be ironed out, they shouldn’t stop the roll out of injectables."

The research studies (and regulatory approvals so far) have specified a lead-in period of four weeks in which oral versions of the drugs are taken. The rationale is to ensure that the medications are well tolerated since an injection cannot be removed if it causes problems. Safety concerns have not emerged from the trials so far and there are some treatment data suggesting the oral lead in is not necessary. Hyman Scott told the meeting that he felt comfortable giving patients the option to have the injections ‘off label’ without the lead in.

Relevant to cabotegravir for prevention, there is concern about the ‘long tail’ – the period of several months after a person’s last injection during which drug levels slowly decline. As the person may have active drug in their body, at a level insufficient to protect against HIV, the concern is that if they acquire HIV, they may develop resistance to cabotegravir and other integrase inhibitors (the mainstay of modern treatment programmes). Research trial protocols stated that people stopping the injections should be offered oral PrEP to ‘cover’ this tail, but that will not always be possible – many people will simply stop coming to the clinic.

However, HPTN 083 data presented to CROI was reassuring: four individuals who seroconverted during the long tail did not develop resistance. It may be precisely because drug levels were low that resistance did not occur – the risk of resistance is greater when HIV replicates in the presence of high levels of a drug that, on its own, is not enough to stop the virus replicating.

The new challenge which that study revealed was the low sensitivity of routine diagnostic tests in people who are taking cabotegravir, probably due to the drug blunting or delaying the production of antibodies. Some people’s HIV infections were not detected by antibody tests for several weeks or months. A similar phenomenon has already been seen in small numbers of oral PrEP users, but the effect appears to be more pronounced with the injectable drug.

Nittaya Phanuphak said that Thai services rely on third-generation rapid tests, which are especially likely to miss such cases. The most sensitive test would be for RNA (viral load), but that is expensive and comes with the logistical challenges of a laboratory test. An option to consider is pooled RNA testing, already used to screen blood donations. Samples from around 100 people are pooled and tested. If the pool tests negative, then all the samples are considered to be negative. However, if the pool tests positive, progressively smaller pools (of 50, then of 10) are tested until each of the HIV RNA positive specimens are isolated.

A second option is point-of-care or near point-of-care RNA tests, such as m-PIMA or GeneXpert. These technologies have advanced considerably in recent years, but there is still progress to be made in terms of convenience, turnaround times, running costs and accuracy.

Dr Rachel Baggaley of the World Health Organization told a meeting of community advocates that developing practical strategies for testing will be key to ensuring that injectable PrEP isn’t a product reserved for high-income countries.

Professor Raphael Landovitz, who led HPTN 083, added: “To me, this is a galvanising clarion call to everyone to demand that we invest more resources in better, more sensitive and still quite specific diagnostics, including point of care testing that has those properties.”

Better diagnostics are needed both in high- and low-income settings. Access to point-of-care viral load tests has improved in the global south, but they are often unavailable in high-income settings.

And while the latest data have identified some operational challenges and details which need to be ironed out, Landovitz said these shouldn’t stop the roll-out of injectable cabotegravir. He insisted that we should not lose sight of the bigger picture – its impact on HIV infections. Compared to people using oral PrEP, there were 66% fewer infections in men who have sex with men and trans women and 89% fewer infections in cisgender women in the two key studies. These results are “staggering”, he said.