PrEP use taking off in Thailand and Vietnam 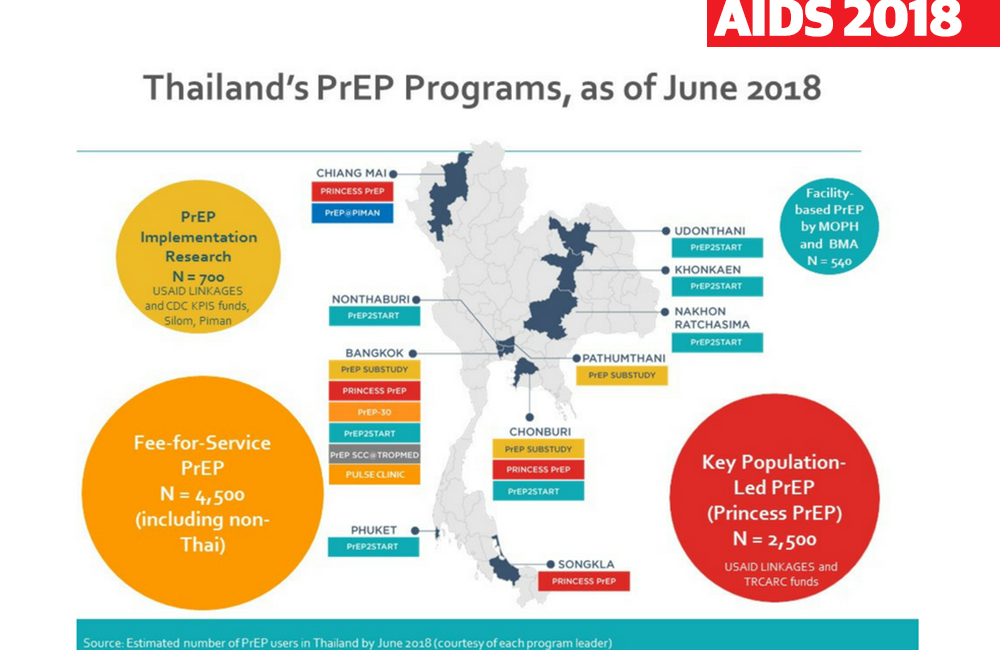 Slide from Donn Colby's presentation on PrEP in Thailand at AIDS 2018.

Pre-exposure prophylaxis (PrEP) use is accelerating among men who have sex with men and transgender women in two south-east Asian countries where it is receiving funding and government support, the 22nd International AIDS Conference (AIDS 2018) conference heard two weeks ago.

As with PrEP in other settings, one of the challenges is retention; in Thailand only half of the gay men and a quarter of the transgender women who started PrEP in one scheme were still taking PrEP a year later. The other is knowledge of and access to PrEP: with under 7000 people taking PrEP altogether in these populous countries, programmes will have to be considerably larger to start having an effect on epidemics that are still expanding.

Thailand was very early into the epidemic and a peak of incidence was reached in injecting drug users as early as 1985, to be followed closely by female sex workers and their clients in the early 1990s. Even as late as 2000 there were more diagnoses among heterosexual women who were not sex workers than among gay men.

Now, however, men who have sex with men (MSM) and transgender women (TGW) represent 29% of new infections and more in urban sites: Donn Colby of the Thai Red Cross (TRC) said that although MSM and TGW represent only 30% of clients at the HIV and STI clinic run by TRC, they represent 90% of new HIV diagnoses. HIV prevalence in high-risk gay men in Bangkok has been over 30% since 2007 and is about 7% in the national MSM and TGW population.

About 5600 people have accessed PrEP so far in Thailand, though not all are necessarily current users. PrEP provision in Bangkok started as early as 2014, through the PrEP-30 scheme at the TRC’s clinics. Here, people could buy Thai-manufactured generic PrEP for 30 Thai baht a day (about US $0.90 or UK £0.70). This was followed in 2015 by a small implementation research programme offering free PrEP in metropolitan Bangkok and the tourist hub of Pattaya.

In early 2016 PrEP provision in Thailand at least doubled when Princess Soamsawali, the king’s popular former wife, announced that she, supported by USAID, was sponsoring a programme to provide free PrEP to 1000 people a year for the next three years. The "Princess PrEP" scheme currently supplies PrEP to half the PrEP users in Thailand and has opened clinics in Thailand’s second- and third-biggest cities, Chiang Mai and Hat Yai. In this last year of its operation, it is targeting young PrEP seekers in a country where the majority of new HIV infections are acquired by young and adolescent MSM and TGW.

The beginning of 2017 marked the introduction of PrEP by the Thai Public Health Ministry (MOPH), which added three cities in the poorer north-east of the country and its second tourist mecca, Phuket. The number of MOPH PrEP prescriptions is currently limited but is expanding quite rapidly. Some form of free PrEP is now available to MSM, TGW and serodiscordant couples in 26 of Thailand’s 76 provinces.

Seven community organisations in the three biggest cities plus Pattaya are included as pilot PrEP providers in a so-called Key Populations-Led Health Service scheme (KP-LHS). Presenter Ravipa Vannakit from USAID described these as “learning labs” where community-based organisations provide HIV testing and self-testing facilities as well as PrEP. Between them the KP-LHS centres are now providing PrEP to 30% of PrEP users in Thailand –1467 MSM and 230 TGW.

The average age of PrEP seekers is 29 in MSM and 26 in TGW but some centres are reaching younger people: for instance, in the Rainbow Sky Association clinics in Bangkok and Hat Yai, which provide PrEP for 865 people between them, 46% of TGW and 31% of MSM are under 24, and 18% of TGW are under 19.

Other than ages, the characteristics of MSM and TGW PrEP users were similar apart from two big differences: a third of TGW but only 7% of MSM were or had been sex workers, and only 34% of TGW but 71% of MSM had a college or university education.

As in some other settings, retention has proven to be an issue. Nearly half of TGW (46%) and 23% of MSM did not return for their one-month visit after starting PrEP; after 12 months, only 47% of MSM and 25% of TGW were still returning for their three-monthly check-ups and refills.

One unexpected finding is that it was presumed that when PrEP become available for free through the other programmes, demand for 30-baht PrEP would decrease. This has not happened; the number of new clients per month at the Thai Red Cross clinics in Bangkok has increased from about 25 in late 2015 to about 80 a month now, with a cumulative total of about 1850 people having started PrEP. Donn Colby believes that a lot of the paying customers are people who might not qualify for the free PrEP schemes, including heterosexuals and foreigners, but also that the amount of personal information required at the clinics is less: “Some of our clients may have reasons to value privacy,” he said.

Modelling the effect of PrEP in Thailand

PrEP usage is still far too low for what remains a high-incidence HIV epidemic in key populations. Sarika Pattanasin of the Thai Ministry of Public Health presented a model of the possible impact of PrEP. In 2013 the Bangkok MSM Cohort Study (BMCS) published incidence estimates for MSM in the city. It found overall annual incidence in the MSM surveyed was 5.9%, which is high by most standards; but it was even higher among MSM aged 18-21 (8.8%), MSM who had group sex (10%) and MSM who took ‘party’ and chemsex drugs (16.2%).

Taking data from this study and others, the Thai Public Health Ministry’s model was able to estimate the relative possible contributions of condom use and PrEP among this population by calculating incidence among ‘always’, ‘sometimes’ and ‘never’ condom users and people who took PrEP 90% or 50% of the time or who never took it. It found that the efficacies of 90% PrEP use versus none, and 100% condom use versus none were similar: about 73% for PrEP and 71% for condoms. But the efficacy for ‘sometimes’ using condoms versus never was only 8%, whereas the efficacy of 50% PrEP use versus no use was 32%, which could still make a difference to HIV incidence.

If MSM who never used condoms started taking PrEP 90% of the time, the model estimates that annual incidence in MSM would fall by 73%, stopping, as an example, an estimated 642 infections in MSM aged 18-21 per year.

Nearby in Vietnam, the HIV epidemic started later, peaking in both people who inject drugs and female sex workers around 2002, with peak prevalence of 28% and 6% respectively. Now, however, the epidemic is concentrated in MSM, with an estimated prevalence of 12.2% in 2017 compared with 4% only five years ago. Prevalence in drug injectors, who are numerically fewer, is about the same as in MSM now.

Presenters Bao Ngoc Vu from the global health NGO PATH and Ngoc Anh Nguyen from G-link, the first social enterprise set up in Vietnam to provide HIV and sexual health services to MSM, said the G-Link and other key-population social enterprises started providing PrEP in March 2017 under a pilot scheme called “PrEPped for PrEP” (P4P). G-link, like some other social enterprises for key populations, has expanded from small community-based organisations offering counselling and support, to offering HIV testing, to now offering HIV treatment as well as PrEP.

Up to June 2018, the cumulative number of MSM, and negative partners in serodiscordant couples, in Vietnam is 1323. It has accelerated, with approximately 70 a month starting up until March 2017 but about 180 a month in the last three months. The large majority of PrEP (91%) is provided by the P4P scheme but a small amount is provided by public hospital and private clinics.

Clients pay for PrEP, which costs roughly $15 US dollars a month. So far adherence is good, at a reported 92% in those taking four or more pills a week, and G-link have only seen two HIV infections, both in men who had undetected acute HIV infection and who were in their first month on PrEP. Baseline STI prevalence in MSM was 11%, showing that they are reaching a high-risk population.

Although they did not give exact figures, Vu and Nguyen said that the majority of people starting PrEP are in their 20s, and roughly 85% are MSM, with only 5% being TGW.

National PrEP scale-up is now underway through PEPFAR and the Global Fund alongside the P4P fee-based service, and will be needed: Vietnam’s 90-90-90 figure is 75-69-93, so that fewer than half its estimated population with HIV is virally suppressed.

This report is drawn from the following presentations at the 22nd International AIDS Conference (AIDS 2018), Amsterdam, July 2018.