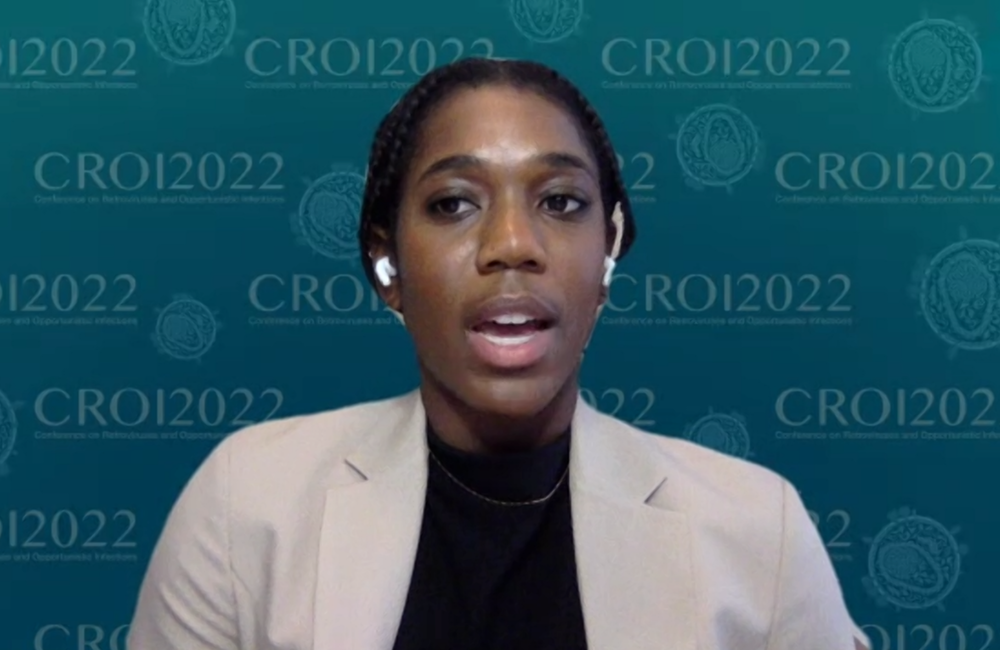 Maya Jackson-Gibson presenting the study on COVID-19 and adverse birth outcomes at CROI 2022.

An enormous quantity of important and fascinating HIV research is presented each year at the Conference on Retroviruses and Opportunistic Infections (CROI). We have published 30 news articles from this year’s conference. As it is hard for anyone to keep up, here is a round-up of the news relevant to HIV treatment programmes in sub-Saharan Africa.

While investigating how to optimise the health of HIV-negative children born to mothers living with HIV, researchers have found another advantage for the antiretroviral medication dolutegravir over efavirenz (the medication which was previously used). After dolutegravir was taken in pregnancy, there were fewer infants with abnormally low weight or height, measured at one year of age.

An experimental vaccine tested in over 2600 young women in seven southern African countries did not provide protection from acquiring HIV, the conference was told. The Imbokodo study was launched in 2017 but was stopped ahead of schedule last summer because of the poor results. The findings add to a long string of HIV vaccine disappointments – future vaccine studies will probably need to take a different approach.

Two studies provide more evidence that the antiretroviral medications tenofovir and lamivudine can be ‘recycled’ in second-line treatment. The findings suggests that the World Health Organization’s guidelines should be revised – they currently recommend including a new nucleoside reverse transcriptase inhibitor, which is usually zidovudine (AZT), in a second-line treatment regimen. However, zidovudine has more side effects than tenofovir.

Improved access to viral load and drug resistance testing was not enough to improve HIV treatment outcomes in Kenyan children with HIV, the conference was told. The researchers hoped that point-of-care viral load testing and early referral for drug resistance testing would speed up clinical decision-making, resulting in improved health. However, rates of viral suppression were sub-optimal both in children who received the interventions and children who did not.

You can also read our selections of the top five stories on HIV prevention, HIV treatment, HIV cure and vaccine and HIV, ageing and co-morbidities from CROI 2022.