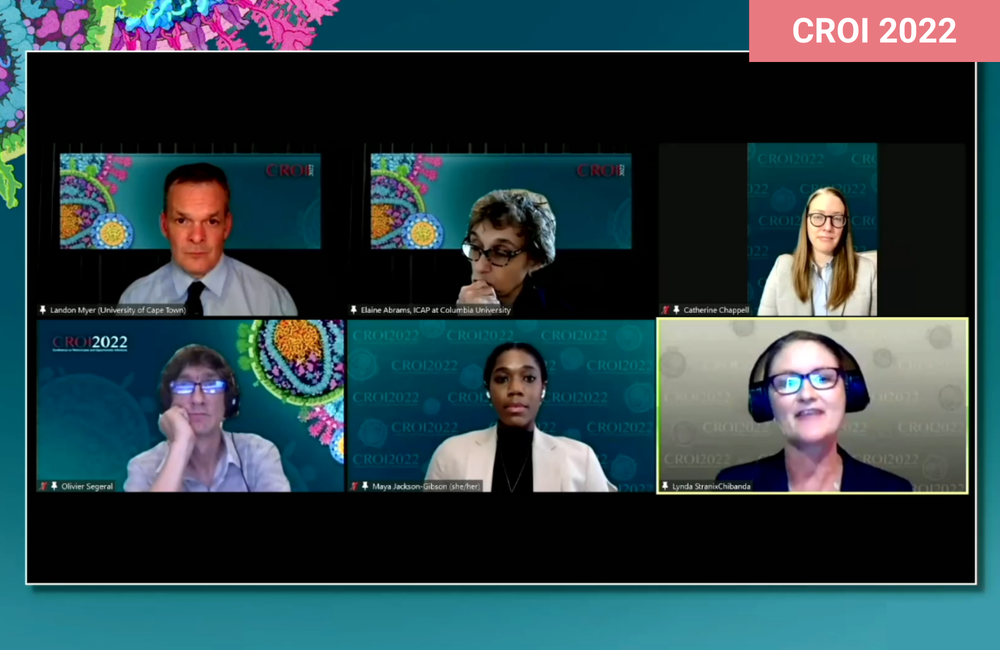 Data from a randomised clinical trial show another advantage for dolutegravir in pregnancy over efavirenz – fewer cases of abnormally low weight or height, measured at one year of age. Data on these kind of issues should be taken into account when selecting antiretrovirals during pregnancy and breastfeeding, Dr Lynda Stranix-Chibanda told the Conference on Retroviruses and Opportunistic Infections (CROI 2022) this week.

In countries with a high-prevalence of HIV, significant numbers of children are born to HIV-positive mothers. Thanks to the effectiveness of antiretroviral prevention measures, they are HIV-negative but were exposed to HIV and those medications in the womb. In eSwatini, Botswana, South Africa and Lesotho over 20% of children are ‘HIV exposed uninfected’, which is the terminology often used.

Numerous studies have reported poorer outcomes for this group of children, including infections, illnesses and deaths in the first years of life; challenges with neurodevelopment and cognition; and poorer physical growth. However, few studies have followed children for more than a year or two, and many date from earlier in the epidemic. Modern antiretrovirals and current advice to begin breastfeeding early may be associated with better outcomes in future generations.

Provides a measure of the spread of values.

In a plenary talk, Professor Andrew Prendergrast of Queen Mary University of London said poorer outcomes in HIV exposed but uninfected children may be linked to three main factors, although disentangling them is challenging.

Firstly, infants are exposed to HIV in the womb. “HIV, like many chronic maternal infections in pregnancy, leaves an immune footprint on the foetus because of exposure to a skewed maternal immune milieu,” he said. “Immune activation in the mother can lead to placental inflammation, induction of innate immune activation in the foetus and priming of adaptive immune responses, all of which may modify the baby’s response to infections in early life.”

Infant exposure to antiretroviral medications is a possible factor, but is not the main driver of differences, Prendergrast said. Health challenges for these children were seen before antiretrovirals were available and have lessened in recent years, while data from women taking the same medications as PrEP are reassuring. Nonetheless, choice between different antiretrovirals in pregnancy is still important to optimise infant outcomes, he added.

Socio-economic factors and other social determinants of health also play a part. For example, it is well known that infants who grow up in poverty have poorer health, including slower physical growth. When researchers adjust their statistics for known socio-economic factors, the association between being exposed to HIV and poor health outcomes is weakened, but does not disappear, which suggests that this is only part of the explanation.

IMPAACT 2010, also known as VESTED (Virologic Efficacy and Safety of Antiretroviral Therapy Combinations with TAF/TDF, EFV and DTG) was a randomised clinical trial designed to compare the safety and efficacy of two dolutegravir-containing regimens with an efavirenz-based regimen in pregnant and breastfeeding women.

When the study began in 2018, efavirenz-based regimens were the standard of care for pregnant women in many countries. The results of this and other studies have contributed to making dolutegravir the preferred first-line regimen, including during pregnancy and breastfeeding.

A total of 643 participants were randomised to receive either:

Women were eligible to join the study between 14 and 28 weeks of pregnancy if they had not received more than 14 days of antiretroviral treatment in their current pregnancy. The study recruited women in Botswana, Brazil, India, South Africa, Tanzania, Thailand, Uganda, United States and Zimbabwe.

Previous analyses have shown higher rates of viral suppression in the two dolutegravir arms than in the efavirenz arm. In addition, in the dolutegravir arms fewer mothers had insufficient weight gain in pregnancy, there were fewer pre-term deliveries and fewer infants weighed less than 2.5kg at birth. Taking all adverse events into account and giving more weight to the more serious ones, the regimen combining dolutegravir with TAF had a more favourable profile than the one combining it with TDF, which was in turn to be preferred over the efavirenz-based regimen.

During their first year of life, three-quarters of infants were breastfed, usually throughout the year. Almost all received prophylaxis with antiretrovirals and cotrimoxazole. They were weighed and measured six times in the year, with 81% completing assessments at week 50.

The infants’ measurements were compared with those expected of infants of the same age, as defined by the World Health Organization. Firstly, height (or to be precise, length, as infants were measured lying down). Infants whose length-for-age is more than 2 below the standard deviation are defined as stunted (fewer than 2.3% of infants are expected to be this weight). Significant numbers of infants in all study arms were stunted, highlighting that this is a widespread problem among children born to women living with HIV in these settings, and in the wider population of many lower- and middle-income countries too.

But stunting was more common in infants whose mothers took efavirenz (21%) than in those who took dolutegravir, with little difference between mothers who took dolutegravir with either TDF or TAF (14% and 13%). Those figures are for week 50, but differences were seen each time babies were measured, including at birth – suggesting that poor growth had started in the womb.

Similarly, infants’ weights were compared with international norms, with a weight-for-age more than 2 below the standard deviation defined as underweight. Differences were seen throughout; at week 50, 11% of infants in the efavirenz arm were underweight, compared to 3% and 6% in the two dolutegravir arms.

In contrast, there were no apparent differences in weight-for-length between study arms.

Given concern about weight gain with dolutegravir and TAF in adults taking HIV treatment, it is encouraging that there was no increase in infant obesity in infants exposed to these medications (2%, compared to 3% in the efavirenz arm). Moreover, infant growth was generally similar following exposure to TAF or TDF.

Although these data identify an association with specific antiretrovirals, Stanix-Chibanda was circumspect about the potential mechanisms. She highlighted differences in maternal weight between study arms as a possibility, while pre-term delivery and low birthweight are also factors that were more common in the efavirenz arm and have been linked to stunting in other studies.

“We recommend that infant growth be factored into the choice of optimal maternal ART regimens during pregnancy and breastfeeding,” she concluded.

Stranix-Chibanda L et al. Growth of infants with perinatal exposure to maternal DTG vs EFV and TDF vs TAF. Conference on Retroviruses and Opportunistic Infections, abstract 30, 2022.