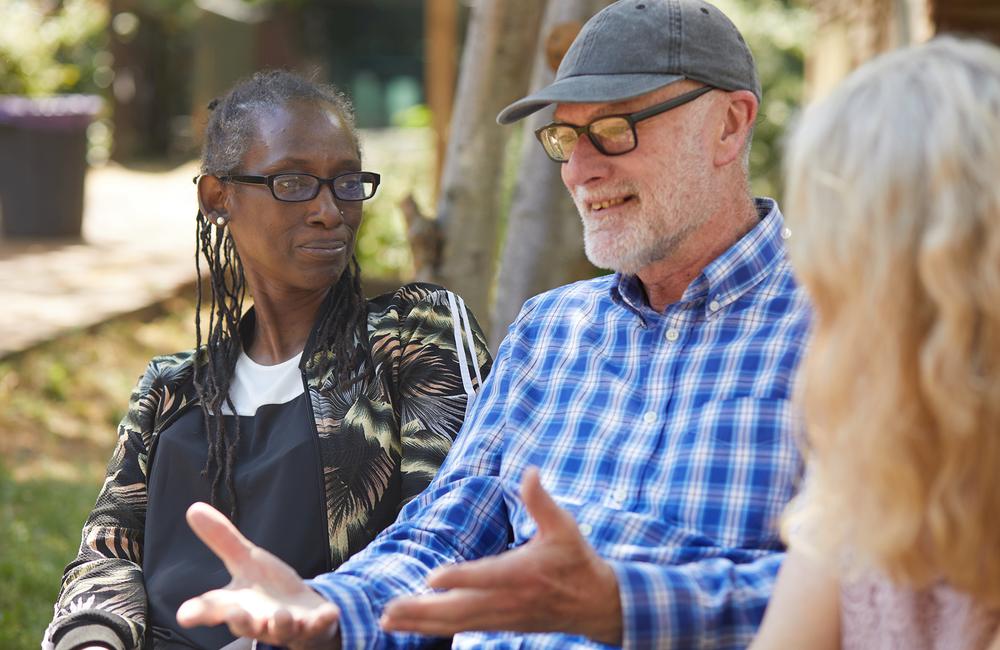 What is the ageing process? As people get older, there is a progressive deterioration in the way the body functions. These changes make older people more vulnerable to infections, injuries and disease. They may lose some of their energy, physical strength and resilience. Older people are more likely to develop heart disease, diabetes, osteoporosis, cancer and other ‘age-related conditions’ than younger people.

People with HIV are now living longer than ever, because of effective HIV treatment. These days, people with HIV are unlikely to be ill because of HIV, but increasing numbers do have heart disease, diabetes and other ‘age-related conditions’. Rates of some of these conditions are higher in HIV-positive people than in HIV-negative people. It sometimes appears as if these problems occur at younger ages in people living with HIV.

This has led many people with HIV, doctors and researchers to ask whether HIV speeds up the ageing process. In other words, do people living with HIV have a decline in physical function and develop age-related conditions at younger ages than their peers? This is sometimes referred to as ‘premature ageing’ or ‘accelerated ageing’.

There is still a lot that we don’t know about this. There is not a scientific consensus on the question of premature ageing. This factsheet explains why things are still uncertain and emphasises four things that we do know:

Research findings about HIV and ageing need to be carefully interpreted. Simple comparisons between HIV-positive people and HIV-negative people can often be misleading.

Secondly, people living with HIV see doctors regularly and have their health closely monitored. As a result, conditions like diabetes tend to be diagnosed promptly. Many people in the general population only see a GP occasionally and may be diagnosed much later, when symptoms have started to bother them.

Thirdly, when studies compare the health of groups of HIV-positive and HIV-negative people, HIV may not be the only thing that’s different between the groups. For example, an HIV-positive group mostly made up of gay men living in urban areas might be compared with a sample from the general population.

Their lifestyles and life experiences are likely to be different in a number of ways. The HIV-positive group may be more likely to smoke, use recreational drugs and live alone. These factors all have an impact on health but are not directly linked to HIV itself.

To deal with these problems, researchers can try to recruit HIV-negative comparison groups that are as similar as possible to the HIV-positive groups, except for not having HIV. For example, some researchers have compared gay men living with HIV and gay men of the same age who don’t have HIV. It’s more likely that the ranges of lifestyles and life experiences in the two groups are broadly similar.

This type of research has also been done with other groups. A particularly large and well-conducted study examined the health of American military veterans. A third of them had HIV and two-thirds did not. The researchers found that if they observed 1000 HIV-negative veterans and 1000 HIV-positive veterans over a ten-year period, they would expect to see:

So in this study, comparing people of similar ages who’ve had similar life experiences, the researchers observed health problems occurring in both the HIV-negative and HIV-positive groups. There are higher rates of illnesses in the people living with HIV, but the differences are not huge. And there are no meaningful differences in the average age at which people develop health problems. The researchers commented: “These findings should reassure HIV-infected patients that they are unlikely to experience these conditions decades earlier than those aging without HIV.”

Why are ‘age-related conditions’ more common in people with HIV?

Although the study just mentioned did not find evidence for HIV speeding up the ageing process, it did find that people with HIV were a little more likely to develop heart disease and cancer than other people. Whatever the age group, people with HIV had higher rates of the diseases than other people of the same age. Other studies have found similar results for diabetes, kidney disease, liver disease, bone problems and other conditions.

There are a number of different factors which probably contribute to the higher frequency of these health problems in people with HIV. They can be grouped into three key areas – people, the immune system and medication. There is scientific debate about how important each factor is, but most experts agree that all three probably combine to have an impact.

As mentioned above, the lifestyles and life experiences of people living with HIV may not be identical to those in the general population. For example, people with HIV are more likely to smoke and have high levels of stress than other people. As smoking and stress both contribute to heart disease, it’s not surprising that people with HIV have a higher rate of heart disease.

People with HIV also tend to have higher rates of some viral infections, including hepatitis C virus, human papillomavirus (HPV) and human herpes virus 8. Amongst other things, these are all linked to cancers which are more common in people with HIV.

So things that are not directly linked with HIV can raise the risk of health problems in people living with HIV.

Taking HIV treatment greatly strengthens the immune system and prevents many illnesses, but it seems that it does not fully restore health and reverse all immune system damage. HIV may continue to cause ongoing, low-level inflammation and immune activation. These dysfunctional responses of the immune system to HIV are likely to contribute to a wide range of health problems.

HIV is not the only cause of inflammation and immune activation. Other viral infections, smoking, heavy drinking, drug use, high-fat diets and obesity are also contributory factors.

Research studies show that people with HIV often have high levels of chemicals that are released by cells during inflammation and immune activation (such as interleukin-6, C-reactive protein, CD14 and D-dimer). Beyond this, much is still unknown. It’s not clear whether the main causes are lifestyle factors, the initial HIV infection, living with HIV long term or other things. Scientists are unsure exactly what levels of which chemicals are associated with a greater risk of future health problems.

Researchers have also noticed some similarities between these processes in people with HIV and in older people. This observation has stimulated much of the research into the question of whether HIV causes ‘premature ageing’. This is an area of ongoing research; it’s not yet clear what its practical implications are.

Taking HIV treatment is still the most important thing you can do to limit inflammation and immune activation.

If you have been diagnosed with HIV for a long time, several years ago you may have taken anti-HIV drugs which would no longer be recommended. Some of these older drugs are now understood to sometimes have had harmful effects on cholesterol, the kidneys, the liver and the bones.

While all drugs do have side-effects, modern anti-HIV drugs are much safer. Today’s HIV treatment is less likely to contribute to age-related conditions in people living with HIV.

In contrast to the idea that the early onset of age-related conditions is inevitable, you can do a lot to preserve your health and reduce your risk of these conditions developing.

"The lifestyles and life experiences of people living with HIV may not be identical to those in the general population."

Take HIV treatment and keep your viral load undetectable. Starting HIV treatment promptly is recommended for everyone but is especially likely to prevent illnesses in people over the age of 50.

Attend your clinic regularly and allow the staff to monitor your health so that any problems are picked up early.

Take statins, blood pressure medication and other preventative drugs if they are recommended by your doctor.

Don’t smoke. Studies show that smoking has a bigger impact on the life expectancy of HIV-positive people than HIV.

Limit your intake of drugs and alcohol.

Maintain a healthy weight. In particular, extra weight around your belly is associated with more health problems.

Exercise regularly. Physical activity is needed not only to control weight, but also to maintain muscle mass and strength.

Stay socially active. Make an effort to see friends and family, get involved in activities, join a club, or volunteer for a charity.

While there is inevitable uncertainty about what might happen in the future, we can look at the facts about how people with HIV are living today. Most people with HIV are living well and in good health. Many people living with HIV never have any HIV-related illnesses. The health conditions that some people with HIV do have can mostly be managed with medicines and lifestyle changes. Death rates are at an all-time low. Based on current trends, it is calculated that people with HIV who have a CD4 count over 350 by the end of their first year of HIV treatment will have a life expectancy approaching that of people in the general population.

The improvements we have seen in HIV treatment and care over the last few years could lead us to be optimistic rather than pessimistic.

HIV treatment as you get older