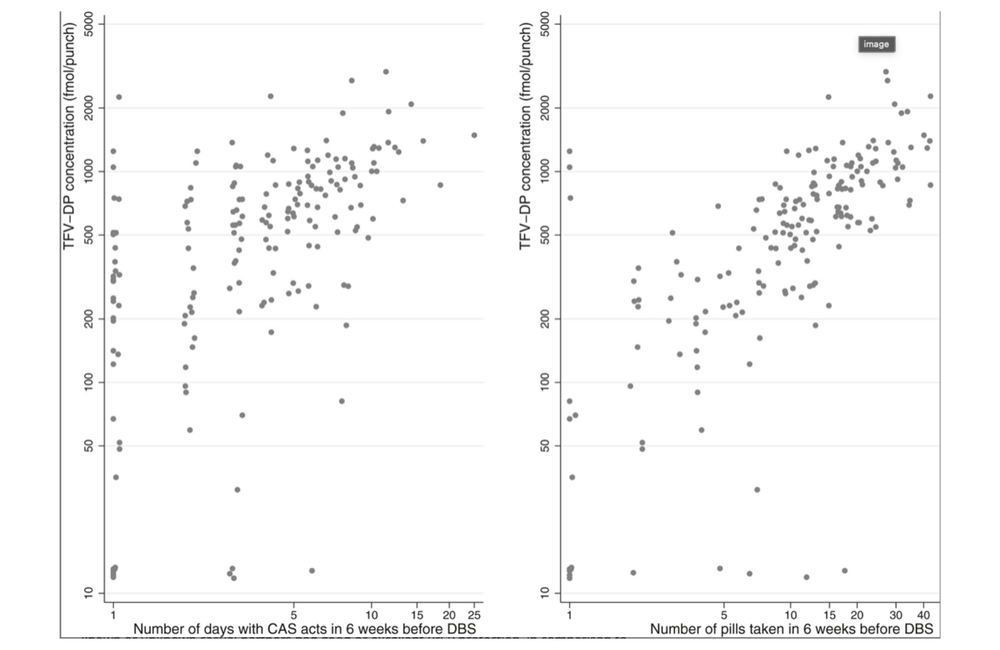 An analysis of the Dutch AmPrEP study of HIV pre-exposure prophylaxis (PrEP) in participants who took event-driven instead of daily PrEP has found that users’ accounts of their PrEP usage, and whether they took it at times of HIV risk, were reliable and were corroborated by drug level measurements. This shows that in this population at least, gay and bisexual men can use event-driven (‘2-1-1’) PrEP appropriately and effectively.

This is important because one of the scientific problems with event-driven PrEP is the difficulty of measuring adherence in a prevention medication designed to be taken only when the occasion demands.

The AmPrEP study began in 2015 and the current analysis reports on the first 42 months (3.5 years) that participants were enrolled. It involved 376 participants – mainly gay and bisexual men with two trans women. Participants were offered the choice of taking daily PrEP, or event-driven PrEP using the 2-1-1 regimen. (Click here for a clear explanation and diagram of 2-1-1.)

The IPERGAY study showed 2-1-1 was as effective as daily PrEP, but some studies have suggested that some PrEP users find it hard to understand and some healthcare workers hard to explain.

AmPrEP reported in 2019 that two participants caught HIV, neither of whom were taking 2-1-1. One had stopped taking PrEP for several months before infection, while the other was a unique case involving a participant who caught HIV despite good adherence to daily PrEP.

Given the effectiveness of event-driven PrEP, the researchers looked into whether participants used the regimen appropriately.

This is challenging for two reasons. Firstly, people’s recall of their sex lives and whether they took PrEP at times of risk may be unreliable. Secondly, drug levels in the blood of people who take PrEP intermittently are no guide to whether they are taking it appropriately.

Secondly, at participants’ quarterly study appointments, they were given a questionnaire that asked them to recall whether and how often they had used PrEP over the last three months, whether CAS actually happened when they took PrEP, and who with. This was to see how well participants’ longer-term recall correlated with daily recording.

Thirdly, dried blood spots (DBS) were taken three times during the study: at either three, six or nine months after the start, and then at months 12 and 24. DBS samples measure drug levels inside red blood cells rather than plasma. They indicate the average tenofovir levels and therefore pills taken over the previous six weeks. The other PrEP drug, emtricitabine, is not metabolised in the same way and intracellular levels decline much more quickly and measuring DBS levels of emtricitabine can indicate whether PrEP has been taken in the previous two days.

Of the 182 participants who took event-driven PrEP at some point during the study, 41 (23%) never actually used the app and were excluded from this analysis. There were three differences between the people who used the app and the ones who did not. Firstly, income: while 26% of participants were in the lowest of three income brackets, 41% of non-app users were. Secondly, 48% of participants said they were in a steady relationship, whereas the 41 people who did not use the app were much less likely to be (27%). This may reflect greater concern about risk in people who do not have a primary partner. Those who identified as not exclusively gay were also less likely to use the app.

The total number of days on which users recorded that CAS took place ('CAS days') was 8224. Note that this only represents 4.6% of the total number of participant-days in the study, or one CAS day every 22 days. This in itself suggests that for many users, event-driven PrEP was an appropriate choice, if used when they were at risk.

‘Excellent’ adherence was defined as taking all four doses of the 2-1-1 regimen and ‘good’ as the double dose before sex plus either of the following two doses.

Participants largely did use PrEP when at risk. According to app data, all three doses were taken for 84% of sex with known casual partners and 82% of sex with unknown partners. On only 7.6% and 9.7% of occasions respectively did they take only one or no doses.

There was some increase during the study in the likelihood of PrEP not covering CAS days, in the order of about 2-3% more per month, but 70% overall were still covered by the end of the study.

As seen in many other PrEP studies, age was associated with lack of PrEP coverage, with men under 35 much more likely to have CAS days not covered by PrEP. Heavy drinking was associated with twice the risk of no PrEP coverage with known casual partners. Interestingly, those with more frequent drug use reported half as much missed PrEP with steady partners as other participants did; the researchers suggest that as buying drugs requires some advance organisation, taking PrEP is likely to be a feature of this organisation too.

Ninety-four per cent of the 182 event-driven PrEP users completed a quarterly questionnaire. Just over 90% recorded some PrEP use over the previous three months. During this period, a course of event-driven PrEP was started an average of six times, but in two out of these six cases, CAS did not actually happen. This correlates almost exactly with the estimate that one out of every 22 days involved CAS and shows that episodes of HIV risk were not very common.

Ninety-eight participants gave DBS samples, an average of twice each. In studies of gay men taking daily PrEP, an intracellular level of 700 femtomols (fmols) of tenofovir per sample has been associated with adherence of at least four days a week and good efficacy.

"According to app data, all three doses were taken for 84% of sex with known casual partners and 82% of sex with unknown partners."

The results from AmPrEP would be alarming in participants aiming to take PrEP daily. The average drug level was only 590 fmols per sample. Furthermore, the emtricitabine levels were undetectable, indicating no PrEP in the last 48 hours, in 69% of samples.

The results from this study show that AmPrEP participants generally used PrEP appropriately at the time they were at risk of HIV. This is very different from the results seen in some other studies. For instance in the ADAPT (HTPN 067) study, PrEP coverage was much lower in gay men and trans women allocated to 2-1-1 PrEP in Bangkok and New York than in those allocated to daily PrEP. But in that study, the PrEP regimen was allocated randomly and may not at all have reflected participants’ individual risk levels or preferences.

The AmPrEP results have been backed up by the larger French Prévenir study, whose interim results were reported at CROI in March. In this study of over 3000 gay and bisexual men and trans women, there were three HIV infections in people using daily PrEP and three in those using 2-1-1. The degree of protection offered by daily and event-driven regimens was identical, despite the fact that the 2-1-1 users only used an average of two pills a week instead of seven.

In the Dutch study, PrEP users, given the choice, seem to have chosen their PrEP regimen and to have used it in accordance with, we presume, a pretty accurate estimate of their risk. The result was no HIV infections in 2-1-1 users and only a couple overall in a population who, as unprecedentedly high hepatitis C levels among AmPrEP participants show, would have been highly at risk of HIV without PrEP.

Jongen VW. Adherence to event-driven HIV PrEP among men who have sex with men in Amsterdam, the Netherlands. Analysis based on online dairy data, 3-monthly questionnaires and intracellular TFV-DP. Journal of the International AIDS Society 24: e25708, 2021 (open access).