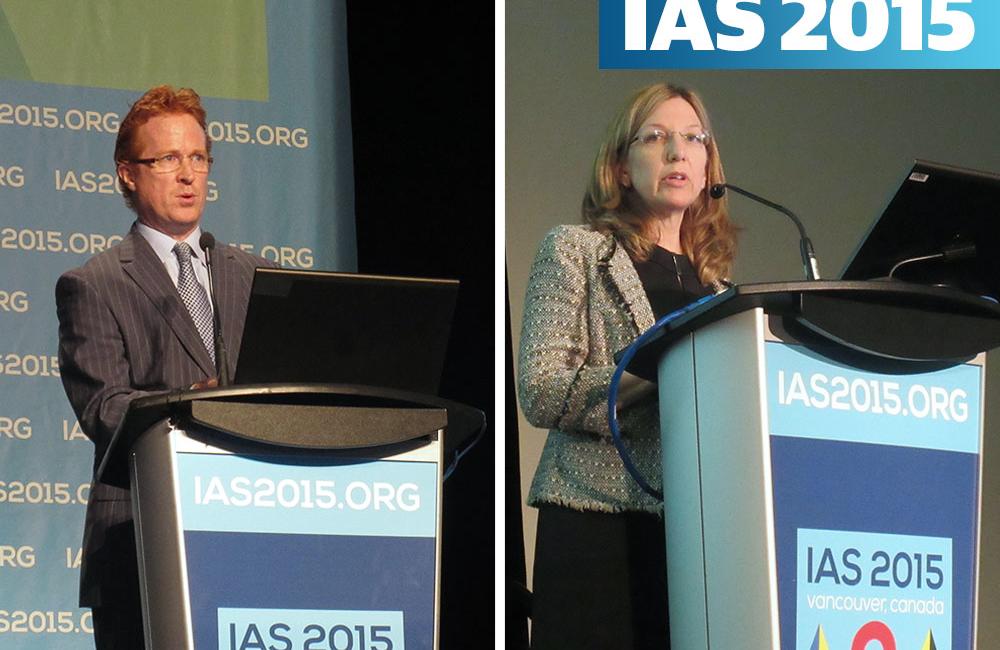 Tim Holtz and Sharon Mannheimer at IAS 2015. Photo by Liz Highleyman, hivandhepatitis.com
This article is more than 8 years old. Click here for more recent articles on this topic

For some people in some settings, less frequent pre-exposure prophylaxis (PrEP) regimens with doses linked to sexual activity are feasible, with high numbers of sexual acts protected by PrEP, studies that were presented on Monday to the Eighth International AIDS Society Conference (IAS 2015) in Vancouver, Canada, show.

This may give people, who want to use PrEP, and their doctors additional options, allowing people to find a pattern of taking PrEP that best suits them. But the studies also found that more people are able to adhere to daily PrEP than non-daily regimens. Further, the actual effectiveness of non-daily regimens remains uncertain.

The studies presented today were in part inspired by the French IPERGAY study, so far the only study to demonstrate that a schedule of non-daily PrEP, with doses before and after sex, could be effective. (There were 86% fewer infections). However IPERGAY was conducted in a population of gay men who tended to have sex quite frequently. To prevent transmission during anal sex, four doses a week appear to be almost equivalent to seven doses. But it’s possible that people who have sex less frequently – and therefore take pills less frequently – will have lower levels of the drug in the body that are not protective.

Presented in Vancouver in a late breaker session on Monday afternoon, HPTN 067/ADAPT is a trio of three randomised trials, investigating the feasibility and acceptability of different PrEP regimens with three distinct populations, in Bangkok, Harlem (New York) and Cape Town. The studies give insights into patterns of use and adherence but were not designed to answer questions about effectiveness. Larger, phase III trials would be needed to do that.

The researchers found that in a group of well-educated, motivated Thai gay men, each of the three PrEP regimens tested were feasible, acceptable and likely to protect against most exposures to HIV. The non-daily regimens required far fewer pills to be taken.

Challenging social circumstances were more commonly experienced by participants in Harlem and Cape Town. Adherence was generally not as good in these two locations. Moreover the daily regimen resulted in better adherence and likely protection against HIV than the non-daily options.

For qualitative data from ADAPT exploring barriers to and facilitators of taking PrEP, see this report.

In each city, around 180 participants were recruited and randomised to receive one of three Truvada PrEP regimens:

Follow up was for six months. Adherence was measured by providing PrEP in pill-bottles which send an electronic signal when they are opened. Weekly phone calls to the participants collected information about recent sexual activity, which was correlated with the data on when pills were taken.

The populations in the three cities had different social, cultural and demographic characteristics. The researchers expected these to influence the acceptability of different regimens – they did not expect to find one regimen that would be appropriate everywhere.

In each of the study sites, the participants had sex an average of once a week.

Across all sites, adherence was somewhat higher for the daily rather than the non-daily doses. For example, in Bangkok, 85% of daily doses, 79% of twice-weekly doses, and 65% of event-driven doses were taken as prescribed. In Harlem, the respective figures were 65%, 46% and 41%.

The primary analysis was of the percentage of reported sexual acts which were protected by PrEP, with doses both before and after sex.

The doses that were missed were most often those which were meant to be taken after sex (both in the twice-weekly and event-driven regimens). Participants often found it difficult to take this dose when they were still with a sexual partner or were away from home.

The researchers also tested blood samples twice during the study to see if tenofovir could be detected, restricting the analysis to those participants who reported having sex in the previous week. In Bangkok, over 90% of participants in each arm had detectable drug, with no significant differences between arms.

In contrast, Harlem and Cape Town participants were more likely to have detectable drug if they had been asked to take PrEP daily.

Six people prescribed PrEP became HIV-positive (five in Cape Town, one in Harlem) but each had low or negligible levels of drug in their body.

One hoped-for advantage with non-daily regimens is that by reducing the number of pills, side-effects may be less frequent. However the data so far doesn't show statistically significant differences in the experience of side-effects between arms. This may be partly due to the limited number of people in each arm and the short period of follow-up. The side-effects that were reported (dizziness, headaches, nausea, diarrhoea etc.) were mild and mostly experienced during the first two months of taking PrEP.

But he said that non-daily PrEP could be an option for those men who have sex somewhat infrequently and know in advance when they are likely to do so. The findings suggest some flexibility in the way in which PrEP can be prescribed.

Robert Grant, who led the HPTN 067/ADAPT studies, told a press conference that PrEP needs to be adaptable to the different circumstances of people’s lives. And non-daily use is happening anyway: “People do choose how to use PrEP, when to take it and when not to take it,” he said.

The Cape Town results had been previously presented at CROI 2015 and reported on aidsmap.com.