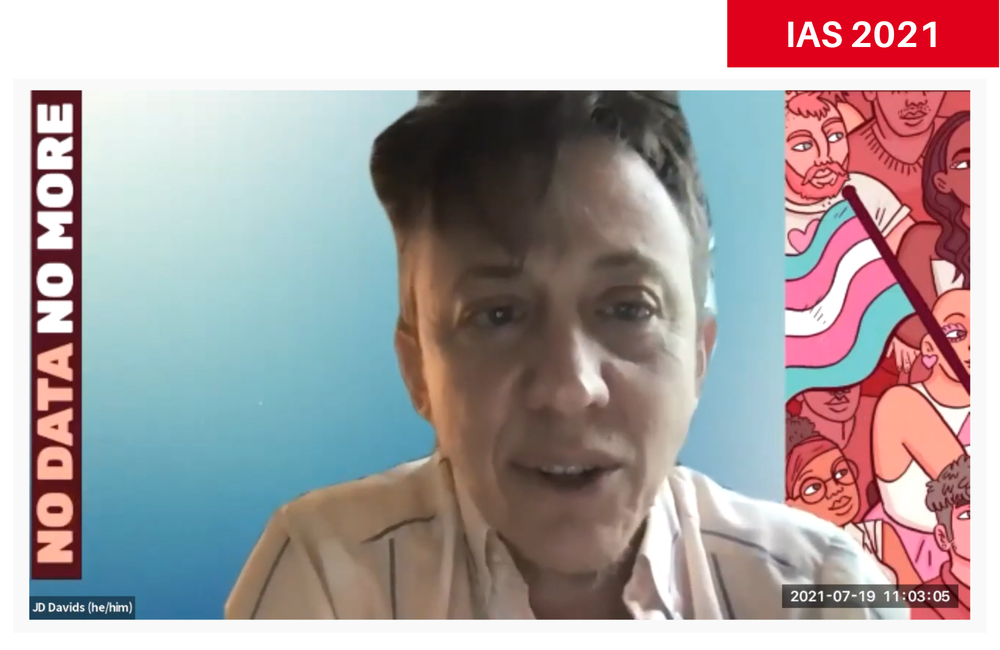 JD Davids at the 'No Data No More' press conference.

Transgender and gender-diverse activists and researchers, in partnership with the advocacy organisation AVAC, introduced a powerful manifesto to align HIV prevention research with their current realities and needs, entitled No Data No More at the 11thInternational AIDS Society Conference on HIV Science (IAS 2021) this week.

“Around the world, we need HIV research that is accurate, comprehensive and free of the very stigma and biases that are at the heart of the decades-long HIV pandemic,” commented JD Davids, an advocate and one of the manifesto’s co-authors. “Yet the majority of research protocols, articles and presentations still speak of ‘men’ and ‘women’, as if these binary designations include all people at risk of, or living with, HIV. This language and conduct are not only inaccurate – they risk the very integrity of HIV research itself and perpetuate the marginalisation of trans and gender-diverse people.”

There are an estimated 25 million transgender adults worldwide, with a global HIV prevalence of 19% among transgender women – this is 49 times higher than that of the general population. Estimated HIV prevalence among trans women for certain regions and countries is even higher than this, with figures for Latin America around 22%, and the Caribbean at 24%. Between 2010 and 2019, global HIV incidence rates in trans women increased by 5%, widely missing UNAIDS’ target to decrease new HIV infections by 75% in this key population by 2020.

“Based on who I am – a transmasculine person who has sex with cis men – I fall under two of the five designated WHO key populations that are most at risk for HIV,” noted lead author Max Appenroth of Global Action for Trans Equality. “Yet my identity as a person placed in high-risk sexual networks is historically and consistently overlooked by the HIV establishment.”

There is a scarcity of HIV data on trans men – who are often perceived to bear little to no HIV burden. However, this is not the case. US estimates place HIV prevalence around 3% in trans men, while data from Zimbabwe suggest a 38% prevalence in trans male sex workers – which is as high as their female sex worker counterparts. Transmasculine men may have diverse sexual realities, such as having sex with cisgender gay men, which could place them at a greater risk of getting HIV.

Gender nonbinary people, who do not necessarily identify with any particular gender, are further lost in the statistics. One US study estimated that nonbinary individuals make up more than 25-30% of trans populations, but there is rarely a distinct category for gender nonbinary people in research studies.

A better understanding of contributors to HIV incidence is needed

The authors demand that: “Key drivers of transgender HIV incidence are comprehensively identified – including biomedical, social and structural factors across countries and regions.”

They also call for HIV research to more accurately track epidemiological data on HIV incidence and prevalence among trans and gender-diverse populations, including in regions where there is little to no data, such as sub-Saharan Africa and eastern Europe/central Asia.

The authors emphasised the importance of centering the needs of trans people when conducting HIV prevention research. For example: “All new PrEP compounds in development should undergo drug-drug interaction studies with feminizing and masculinizing hormones. These pharmacokinetic studies should look into different hormones, whose use varies across regions.”

They highlighted a limited number of studies that currently adhere to this vision – and the need for future research to do the same.

The HPTN 091 study in the US and Brazil was lauded as being transgender centred. It is assessing the acceptability and feasibility of PrEP and other HIV prevention services delivered with gender-affirming hormone therapy amongst trans women. The study is the first in the HIV Prevention Trials Network’s 21-year history designed specifically and exclusively for trans women. Furthermore, the team responsible for overseeing the research and evaluating the data includes trans leadership. The study began enrolling in early 2021 after delays due to COVID.

The recent ground-breaking HPTN 083 study showing the effectiveness of cabotegravir as long-acting injectable PrEP has been lauded for 12% of its participants being trans women. The trial found similar trends of HIV, sexually transmitted infections and adherence between men who have sex with men (MSM) and trans participants. However, the number of trans participants was still not large enough to be able to make specific conclusions about efficacy in trans women. A pharmacokinetic analysis is ongoing and could help determine if protection truly aligns with that in MSM.

Studies related to newer prevention technologies, such as oral islatravir and the islatravir implant, plan to, or currently include either trans women or both trans women and men.

The US NIAID’s HIV Vaccine Trials Network’s Mosaico study (HVTN 706) inclusion criteria were also applauded by activists, for specifically naming trans men, trans women, and gender non-conforming/nonbinary people. It’s the first trial protocol to call for participant recruitment across the gender spectrum – except for cis women, who have their own trial (HVTN 705). The authors of No Data, No More argued that all HIV prevention clinical trials should follow suit.

Co-author Ricki Kgositau-Kanza of Accountability International noted the diversity of people’s identities and experiences: “Trans women may identify as lesbians, and some trans men are gay or MSM. Some trans people prefer intimate partnerships with each other. There are also pansexual and gender nonbinary people, in addition to heteronormative and binary-identified trans people. For these nuances to be visible in data sets, it’s important for trans-identified people to be on the forefront of research done about and for us – ‘nothing without us.’”

However, many trans individuals have concerns related to how hormones will interact with HIV drugs, and this may act as a barrier to uptake and adherence. The manifesto emphasises the the need for interactions between hormone therapy and HIV drugs to be more thoroughly researched.

There are issues related to hormone therapy across the HIV care continuum.

Concerning the risk of acquiring HIV, gender-affirming hormone therapy may predispose trans people to HIV infection in some instances. For example, trans people assigned female at birth taking testosterone may experience vaginal atrophy, making the genital tissue more vulnerable to infection. Thinning tissue, tied to hormone use, might also affect rectal and penile mucosae. Additionally, the use of progestins for gender-affirming hormone therapy could increase HIV risk in trans women, as it is implicated in increased HIV risk in cis women. More dedicated research is needed to address these kinds of knowledge gaps.

In relation to PrEP, although there are increasing data available regarding the pharmacokinetics of emtricitabine/tenofovir disoproxil fumarate (Truvada) showing that hormones are stable with PrEP use among trans women, limited data exist for trans men and trans adolescents.

Specifically, a handful of studies have found that oral PrEP with emtricitabine/tenofovir disoproxil fumarate does not lower hormone (estradiol or testosterone) levels in blood. Conversely, some studies show oestrogen can lower the levels of the PrEP drugs in plasma and rectal tissue. While the lowering mechanism is not clear, evidence increasingly shows that a drop in PrEP drug levels is not enough to weaken PrEP’s protection against HIV.

In relation to antiretroviral treatment, HIV treatment generally does not have a significant effect on gender-affirming hormone levels or vice versa. However, certain antiretrovirals interact with ethinyl estradiol – the key oestrogen component of many oral contraceptives. In trans women, it’s unknown if such interactions can increase or decrease antiretroviral or hormone levels, potentially resulting in loss of viral suppression or inadequate feminisation. Few studies to date have investigated the interactions between antiretroviral therapy and the types and doses of oestrogens and androgen blockers found in feminising regimens.

Activists strongly advocated for the need to further study the drug-drug interactions between hormone therapies and antiretroviral therapy to help determine how each may influence the effectiveness of the other.

In terms of models of care, integrating gender-affirming and HIV services is a priority. More services like the Tangerine Clinic in Bangkok and similar services in South Africa are needed.

However, in a conference session on trans service provision in the global south, Liberty Matthyse from Gender Dynamix, South Africa, queried the sustainability of services that are largely driven by donor funding, such as USAID and PEPFAR. She argued that while working on specialised integrated clinics, there is also a need to think about how to transform the public health system – where trans people are often discriminated against in the global south and elsewhere. She also strongly emphasised that funders need to invest in removing systemic and social barriers, such as the criminalisation of sex work.

This is a central theme throughout No Data, No More and was emphasised in many sessions devoted to trans issues at IAS 2021.

“For trans-focused programs to be effective, trans people – who recognise the subtleties and nuances that often go overlooked – need to be in the leadership seat, informing in-depth analyses and recommendations to ultimately shift the way research informs policy and programs,” commented Immaculate Mugo, a gender consultant and co-author.

“We can be producers of knowledge too,” added Leigh-Ann van der Merwe of the Social, Health and Empowerment Feminist Collective of Transgender Women. “Research is about shifting policy and practice. Research is a powerful activism tool.”