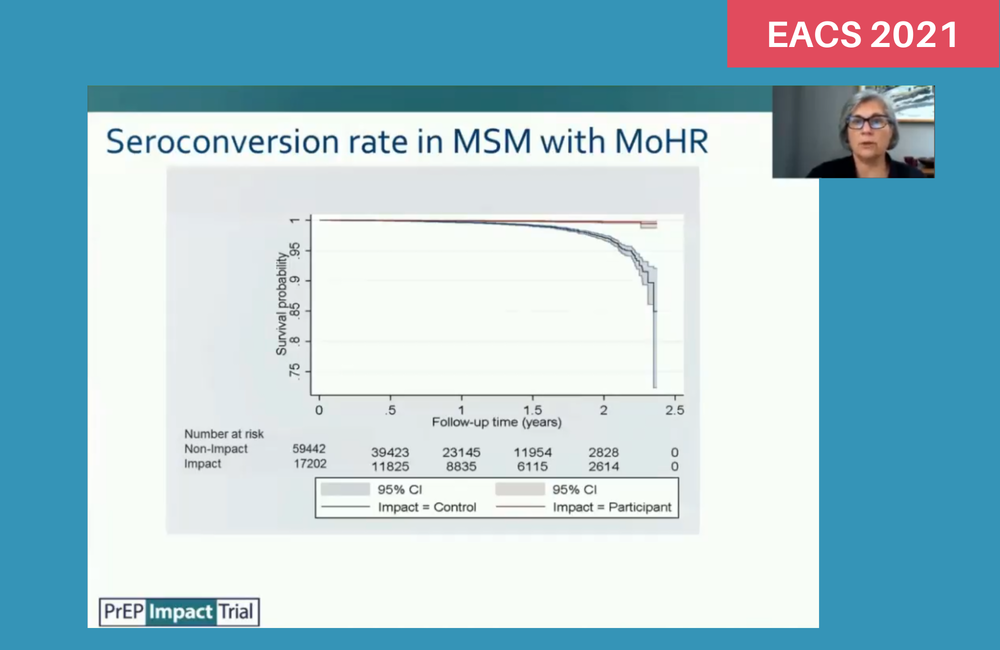 Seroconversion rate in men who have sex with men with markers of higher risk. Dr Ann Sullivan presenting to EACS 2021 on behalf of the IMPACT Study Group.

Attendees at the 18th European AIDS Conference (EACS 2021) in London today heard the first efficacy data from probably the largest PrEP demonstration study ever conducted – the PrEP IMPACT implementation trial in England. Gay and bisexual men enrolled in IMPACT had 87% fewer HIV infections than a comparable group of sexual health clinic attendees who did not take PrEP.

PrEP IMPACT was originally announced in March 2016. At that point, following the conclusive results of the PROUD study in the UK and the IPERGAY study in France, the English National Health Service (NHS) was under pressure to provide PrEP. France had already done so and Scotland soon did the same.

In England, on the other hand, the NHS announced that it was not yet ready to provide PrEP as a routine part of health care. Instead it decided to embark on IMPACT, a three-year implementation study of PrEP. It argued that while PROUD had shown that PrEP worked, and guidelines for eligibility had largely been settled, the logistics in terms of cost, financial responsibility, staff time and training were yet to be worked out. It was unknown how many people would come forward for PrEP. The potential cost to local authorities – who pay for STI clinics – of extra tests and patient follow-up was a particular sticking point.

Importantly, because IMPACT was a trial, it would allow the NHS to provide generic emtricitabine/tenofovir disoproxil fumarate at a fraction of the cost of what it would have to spend on branded Truvada at the time.

Initially, £2 million was allocated for a trial of just 500 more people in addition to the PROUD study’s 500, but after considerable controversy, including the National AIDS Trust’s court victory against the NHS’s refusal to consider PrEP, £10 million was allocated to a 10,000 place implementation trial, starting in October 2017. This eventually more than doubled in size to enrol 24,255 participants, of whom 23,217 (95.7%) were cisgender gay and bisexual men, attending 157 different sexual health clinics. (More enrolment data were presented last year, at the British HIV Association conference.)

Additional analyses focused on a subset of individuals with 'markers of higher risk'. These were men who in addition to the criterion above, had had at baseline one or more additional risk factors during the previous year. These were: diagnosis with a rectal bacterial STI; having sought post-exposure prophylaxis (PEP); having had at least two HIV tests; having engaged in sex work; and having had sex with someone they knew to have HIV or syphilis.

The results presented at EACS were from the start of IMPACT up to 29 February 2020. IMPACT ended in July 2020 but the end-of-February date was chosen as having preceded the first wave of COVID-19 and lockdown, which are likely to have affected the final months’ data.

Up until that date, 17,770 cisgender gay and bisexual men had participated in IMPACT, attending on average six times each, enrolled for an average of a year each.

The median age of participants was 33, though 30% of participants were over 40. Three-quarters were of White ethnicity and the same proportion was either born in the UK (61%) or Europe (15%). Only 3% were Black (African or Caribbean) and only 5% Asian.

Eleven IMPACT participants (0.06%) were diagnosed with HIV at baseline.

During the study there were 25 new diagnoses, one in a trans woman and all others in gay and bisexual men, or one diagnosis in 740 participants. There was no suggestion of biological failure; only one of the 25 people diagnosed with HIV reported PrEP usage that would be expected to be effective.

This works out as an Incidence Rate Ratio of 0.13 – in other words 87% fewer HIV infections in men taking PrEP. To put it another way, if everyone in the comparator group had taken PrEP, 583 of the 670 infections could have been prevented.

Most of the men taking part in IMPACT had markers of higher risk (92%), compared with 71% in the non-PrEP comparison group. In these ‘higher risk’ men, the efficacy of PrEP was similar, with 85.5% fewer infections in IMPACT participants than in non-PrEP users.

Asked about this by aidsmap, Ann Sullivan agreed that some of the factors seen as indicating higher risk, such as seeking HIV tests and PEP, could be markers of greater self-care, as much as ones of greater risk. "We could only work with the risk indicators that GUMCAD [the UK's STI surveillance system] uses," she said. "Other indicators that might be better markers of risk, such as number of partners or chemsex use, are not systematically recorded."

However, this conceals a wide variation in STI incidence. More than half the participants in IMPACT (51%) were not diagnosed with an STI at all while they were in the study. On the other hand, 21% were diagnosed with between two and four STIs, and 5% with five or more. This means that these 26% of men were diagnosed with 80% of all STIs, including just 5% who had 31% of STIs.

STIs were more common in younger men, those born in Europe, Black Caribbean men, and those living in London.

Dr Ann Sullivan told the conference: “PrEP use substantially reduced HIV incidence in men who have sex with men attending sexual health clinics in England, with no suggestion of significant biological failure."

However, the markers of higher risk failed to identify 29% of the non-PrEP users who could benefit from PrEP. They need to be further developed to better identify those who may benefit, she said.

The fact that a quarter of PrEP users were diagnosed with 80% of STIs suggests the possibility of identifying a group who may benefit from frequent STI screening and other targeted interventions; others may not need such frequent screening.