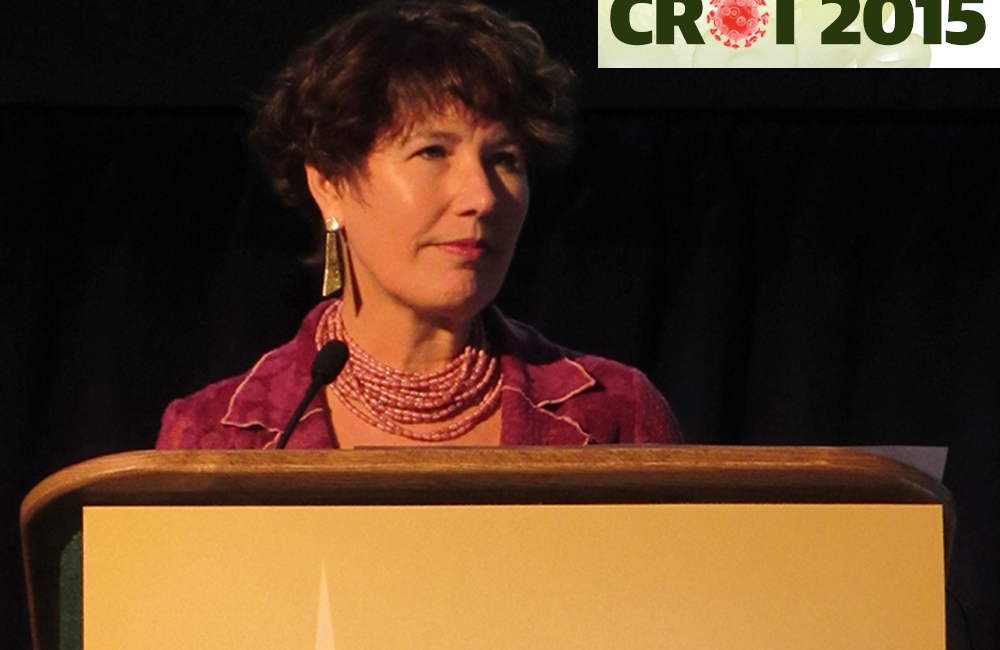 Sheena McCormack presenting at CROI 2015. Photo by Liz Highleyman, hivandhepatitis.com
This article is more than 8 years old. Click here for more recent articles on this topic

A study of pre-exposure prophylaxis (PrEP), the English PROUD study, demonstrated the highest effectiveness yet seen for this method of HIV prevention, the Conference on Retroviruses and Opportunistic Infections (CROI 2015) in Seattle, USA, heard today.

The effectiveness was 86%; for every 20 infections that might have occurred in participants, 17 were stopped by PrEP. There were three HIV infections among 276 participants randomised to immediately start taking daily tenofovir/emtricitabine (Truvada) to prevent HIV infection, and 19 in 269 participants asked to wait a year before starting PrEP.

The high level of effectiveness was unexpected, not least by the researchers. This was not because they thought PrEP would be ineffective, but because they thought only a much larger study would be able to prove it scientifically. The reason PROUD was able to demonstrate effectiveness with what is, by prevention standards, a small study was because HIV incidence – the annual rate of infection – was far higher than that expected, showing that there is a population of gay men at imminent risk of HIV in England that could be cost-effectively protected by PrEP.

PROUD's position as the most successful scientific trial of PrEP so far lasted a mere 15 minutes: in the following presentation, exactly the same level of effectiveness was also reported for the French IPERGAY study – see separate report.

The PROUD researchers reported on its methods and participants last year at the International AIDS Conference in Melbourne. PROUD was conducted among 544 gay men, other men who have sex with men (MSM) and transgender women, attending sexual health clinics in England.

It was designed to find out whether, if participants knew they were taking PrEP, they would use condoms less and therefore catch more sexually transmitted infections (STIs). It also aimed to see whether PrEP could be provided in a 'real-life' setting as close as possible to what clinic attendees already experienced.

"We found that our concerns about PrEP being less effective in the real world were completely unfounded. In fact, the opposite turned out to be the case." Professor Sheena McCormack

Because this meant that all participants had to know whether or not they were taking PrEP, it could not be placebo-controlled. Instead, participants were randomised into two groups, half of them given PrEP immediately and the other half given PrEP one year after enrolling. Both the “immediate arm” and the “deferred arm” participants were also provided with safer-sex support, condom provision and testing for STIs. The first participants started in November 2012, with full recruitment by June 2014.

PROUD was unrandomised – in other words all participants were recalled and offered PrEP – in October 2014 when an independent Data and Safety Monitoring Committee realised that the difference in the HIV infection rates between the two study arms had passed a pre-set threshold and was now so large that it would be unethical not to recall all participants and offer them PrEP immediately.

PROUD, as it is now, was set up as a pilot study, with the intention of moving to a larger efficacy study with 5000 participants.

However HIV incidence, which the researchers had anticipated would be about 2-3% a year, was in fact 8.9% in the deferred arm. The three infections seen in the immediate arm equates to an annual incidence of 1.3%, and this rate difference of 7.6% translates to an effectiveness of 86% (90% confidence interval 58-96%) which is very highly statistically significant (p = 0.0002).

Researchers add in so-called confidence intervals to specify the ‘fuzziness’ of the result, in other words how much random effects may make it deviate from the ‘true’ picture. The minimum-likely 'true' effectiveness of PrEP predicted by the study of 58% – the lower bound of its confidence interval – was well in excess of the 50% which, the researchers calculated, would, if implemented fully, bring about a significant reduction of HIV infections in the gay male population.

The 86% is the difference in infection rates between the two study arms, regardless of whether people who acquired HIV in the immediate arm actually took PrEP or not. In fact, the three participants who acquired HIV in this arm of the study were probably not taking Truvada at the time. One tested HIV positive at his first clinic visit one month after starting and was most likely infected just before he started PrEP. The other two stopped attending follow-up appointments soon after starting and turned out to be HIV positive when they were eventually diagnosed a year or more later. One told the clinic where he was diagnosed that he had not been taking PrEP. However, it cannot be proven that these participants were not infected when they were taking Truvada.

In addition to these three, there were six participants who were found definitely have already been infected with HIV at the time they started PrEP - three in the immediate arm at baseline and three in the deferred arm at month 12. (To mimic 'real life' as much as possible, participants did not have to wait to get PrEP until the results of a screening visit came back: they walked out the clinic with their Truvada the day they were assessed or, in the case of the deferred arm, at the visit where they were HIV-tested a year after they were assessed.)

Two of the three who might have become infected after starting PrEP acquired drug resistance - though one of these was the participant mentioned above who tested HIV positive at his first clinic visit one month after starting.

Adherence must have been very high to achieve the effectiveness seen in any case, and in a subset of men claiming high adherence whose drug levels were measured, drug was found in all of them. Overall, enough pills were prescribed to cover 86% of the days participants would be taking PrEP if everyone's adherence had been 100%. Five per cent of participants in the immediate arm never actually started PrEP. Fifty-six per cent of participants, on the other hand, received enough pills to over 100% of the days they were in the study. The remaining 39% received pills, but not enough to cover every day if their adherence had been 100%.

One of the other striking findings was that PROUD participants were frequent users of PEP – post-exposure prophylaxis. PEP was available to all participants, even if they were allocated to PrEP, because of the possiblility of exposure to HIV during periods of low adherence. In fact, 13 (5%) of the participants in the immediate arm took PEP, two twice, and 83 (31%) of participants in the deferred arm, with 174 prescriptions dispensed – over two each.

PrEP was interrupted by 30 participants in both groups due to a medical event although this was only considered a side effect of drug in 13 participants. These included two cases of kidney malfunction  as measured by raised creatinine, five cases of nausea and/or diarrhoea, two of joint pain and two of headache. More than one of these participants also complained of fatigue and adbdominal pain. PrEP was restarted in all bar two of these 13 participants.

The baseline data reported last July found very high levels of sexually transmitted infections (STIs) in participants. In the randomised phase, about 57% of participants in the immediate arm and 50% in the deferred arm were diagnosed with an STI. This difference is not statistically significant and probably due, in any case, to the fact that members of the immediate arm had 30% more quarterly STI screens during the study than members of the deferred arm (974 versus 749). At a press conference Sheena McCormack reported that there had been four hepatitis C infections during the randomised phase of the trial.

Professor McCormack also presented preliminary data on behaviour change in the study, although not all of the participants' behavioural questionnaires and diaries have been processed yet.

There was a change in the 35% of the immediate-arm participants who had the most condomless-sex partners. At baseline 25% of participants had one or no condomles-sex partners in the previous three months while 25% had more than six. At twelve months, 25% had none or one and 25% had more than eight. However this is not a large change and not all data has been collected, so until then we can't say if this is a real finding.

Professor McCormack commented that when PROUD was planned, it was at a time when some commentators were saying that, while PrEP might be effective in the tightly monitored setting of a placebo-controlled clinical trial, it probably would not work in the real world due to the problem of adherence.

"We found that our concerns about PrEP being less effective in the real world were completely unfounded," she said. "In fact, the opposite turned out to be the case."

Greece took another step to implement a national strategy for LGBTQ rights by introducing free groundbreaking HIV prevention drugs. Kyriakos Mitsotakis’s government is beginning to focus on the prevention of HIV infection rather than just on its treatment.
Bloomberg
3 Oct 22
New & experimental HIV treatments

Judge Reed O'Connor ruled in a case that coverage for HIV prevention medicine PrEP violated the religious freedom of the plaintiffs. It is unclear whether the order will extend nationwide.
The Conversation
13 Sep 22
More editors' picks