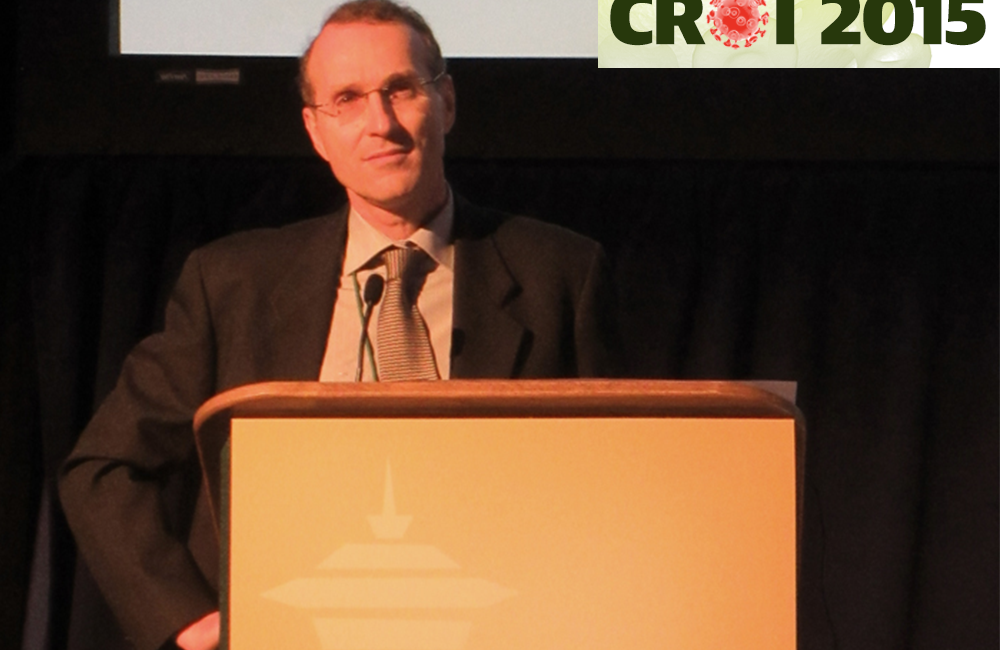 Jean-Michel Molina presenting at CROI 2015. Photo by Liz Highleyman, hivandhepatitis.com
This article is more than 7 years old. Click here for more recent articles on this topic

A French and Canadian study of pre-exposure prophylaxis (PrEP) presented today at the Conference on Retroviruses and Opportunistic Infections (CROI 2015) in Seattle, USA, found that the HIV infection rate in participants taking an intermittent PrEP regime was 86% lower than in people taking an inactive placebo.

Extraordinarily, this is exactly the same level of effectiveness that was demonstrated in the English PROUD study, the outcomes of which were presented 15 minutes before Ipergay – see this report.

Ipergay is a very different study from PROUD, and it is encouraging that two different ways of taking PrEP have both proved effective in gay men, at least in a western-European context.

All trials of oral PrEP so far (other than small safety trials of experimental drugs) have involved taking either Truvada (tenofovir/emtricitabine) or tenofovir alone once a day. The French researchers wanted to see if taking PrEP only around the time participants were actually exposed to HIV would work too. The primary reasons for doing this would be to see if adherence was better, and also to save money, as PrEP’s per-unit cost is far higher than other prevention methods such as condoms. Intermittent dosing could also lower the risk of side-effects. Animal studies had shown that intermittent PrEP might work.

In Ipergay, gay men and other men and transgender women who have sex with men, and were at high risk of HIV infection, were asked to take two Truvada pills (or a placebo) from one day to two hours before they anticipated having sex. If they actually did have sex, then they were to take another pill 24 hours after having sex and a fourth pill 48 hours after it. The period of taking PrEP would thus cover two to three days. If they continued having sex, they were told to continue taking PrEP until 48 hours after their last experience.

As in PROUD, all participants also received risk-reduction counselling, were provided with condoms, had three-monthly tests for HIV and other sexually transmitted infections (STIs), and received hepatitis A and B vaccines if needed.

Ipergay started enrolling participants in February 2012. Like PROUD, it was intended to be a pilot study demonstrating the feasibility of its approach and the investigators initially planned to recruit 350 participants.

By November 2014, it had in fact recruited exactly 400 participants who were actually given Truvada or placebo. Altogether 445 people came forward, but 14 (3.1%) were found to have acute HIV infection when they were screened or on randomisation and 31 others left the study for various reasons (e.g. not meeting eligibility criteria, or lost to follow up). Thus four hundred people are included in this analysis, though in fact by de-randomisation in November, 47 participants had withdrawn or disappeared, and the number in the study at this point was 353.

The average age of participants was 35, 95% were of white ethnicity, 90% had competed secondary education, only 21% had a primary relationship, and 20% were circumcised. Forty-six per cent had used methamphetamine, amphetamine, GHB/GBL, cocaine or ecstasy in the last year. At baseline, 25.5% had been diagnosed with gonorrhoea, chlamydia or syphilis in the last year.

In November 2014, and prompted in part by the PROUD study researchers’ announcement that all participants were to be offered PrEP at once because of high effectiveness, Ipergay’s Data and Safety Monitoring Board also looked at the HIV incidence data and found high effectiveness too. They announced that Ipergay would be unrandomised and all participants offered Truvada just two weeks after the PROUD announcement. Like PROUD, Ipergay continues as an unrandomised implementation study.

As with PROUD, HIV incidence in Ipergay was higher than anticipated, and this meant that the study could prove effectiveness in what is, for a prevention study, a remarkably small number of participants, and in a short space of time. The longest anyone was in the trial before the November de-randomisation was 20 months but the median time was only nine months.

The two participants in the Truvada arm who acquired HIV did not become infected until late in the study – one 16 and one 21 months after entering the study. Principal investigator Jean-Michel Molina said that the two had pretty certainly stopped taking PrEP by that time – they had even been returning unused pill bottles to the clinic. As with PROUD, there was certainly no evidence that anyone who had been taking Truvada had become infected.

Data were presented at the International AIDS Conference last year indicating that adherence in Ipergay had been high – as it must have been to achieve the effectiveness seen. This was achieved on an overall pill usage of 14 pills per month, or approximately half the number that would be used if participants had taken them daily, with good adherence. Twenty per cent of participants took over 25 pills a month, i.e. the equivalent of almost daily, and 20% less than four, i.e. less than one a week.

Participants were also asked if they had taken PrEP the last time they had sex. Forty-three per cent reported that they had taken it according to the protocol; 29% had taken some doses; and 28% had not taken any. As principal investigator Jean-Michel Molina said, this did not mean they had necessarily been at risk as participants might vary their PrEP-taking according to whether they perceived themselves as being at risk.

During the study, 35% of participants were diagnosed with a sexually transmitted infection including 20% with gonorrhoea and 10% with syphilis; Jean-Michel Molina reported two in a hundred participants acquired hepatitis C, equating to six infections.

There was a higher rate of gastrointestinal side-effects such as nausea, diarrhoea or abdominal pain reported by participants taking Truvada than people taking placebo (13% versus 6%). Two participants (1%) had transient decreases in their kidney function as measured by their creatinine levels but only one person in the entire study discontinued Truvada due to an adverse event – a suspected drug/drug reaction.

Summarising the study, Jean-Michel Molina commented that the study showed that gay men were capable of taking PrEP in a way that suited their lifestyle and maximised their safety, if offered the chance to do so.