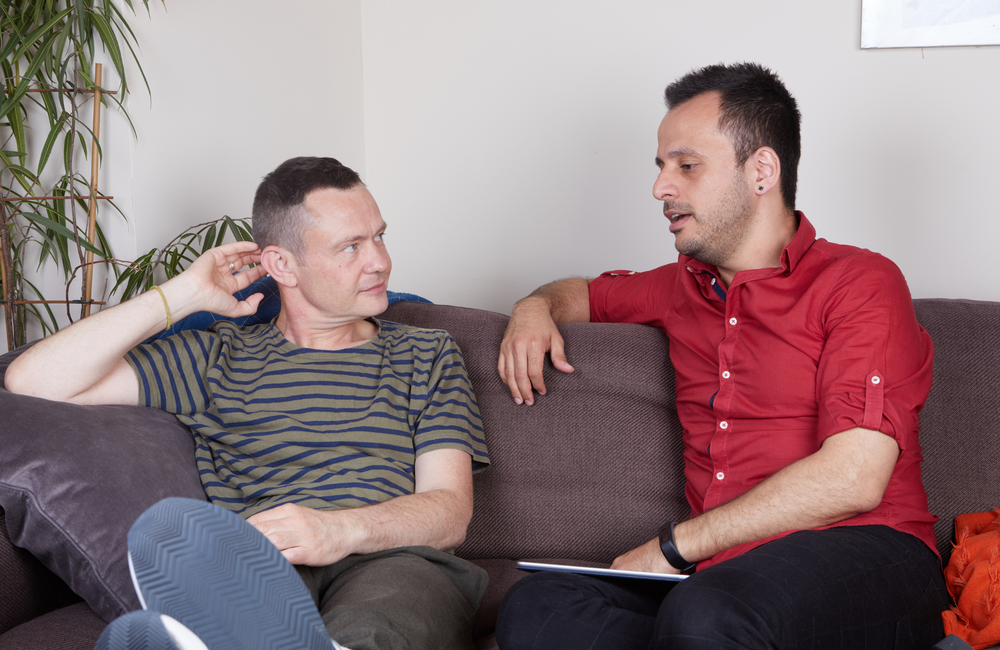 Serodifferent couples, in which one partner has HIV and the other does not, are often seen in terms of HIV risk or of psychological pressures. However, thanks to current treatments and the non-infectiousness of a person with an undetectable viral load, many couples can now think of their lives and relationships as safe and ‘normal’. A study from Dr Steven Philpot and colleagues at the University of New South Wales in Sydney, Australia show that life for serodifferent couples is more complex than that. For these couples HIV is often insignificant in the ‘safe space’ of home, but still poses a challenge in their social or public lives. This is often due to real or anticipated stigma.

Gay men in Sydney who had already taken part in the Opposites Attract study of serodifferent couples in three countries were invited to interview. Twenty-one men responded and all of them were interviewed. Nine took part as individuals, the rest as couples where both partners participated in separate interviews.

Eleven men were HIV negative and ten were HIV positive. Their ages ranged from 31 to 61. One identified as bisexual, the others as gay. All identified as Caucasian, with two exceptions: one Latino and one Italian. This was a highly educated sample, with two-thirds having a degree or post-graduate education. In terms of relationship length, ten couples had been together for between one and five years; two between ten and 15 years; three for over 16 years. Twelve couples lived together, and three lived apart. The HIV-positive partner was diagnosed before beginning the relationship in 13 couples, and after entering the relationship in two couples.

Participants’ experiences of living with HIV differed between life at home and life in public. Their accounts agreed that being at home provided a familiar and protective space for couples to get on with their lives, with HIV playing a minimal role although it was seldom entirely absent.

Undetectable viral load meant that couples could have sex without condoms, without any likelihood of the virus being passed on from the positive partner to the negative one. (U=U has already been explored in an earlier analysis from the same interviews.)

“Everything kept pointing to the fact that not only was it highly unlikely that cross-infection could ever occur; the advances in the medication were just happening so quickly that it just didn’t seem like a worry to me in any way.”

HIV had become ‘just a part’ of couples’ lives in a way similar to the way that other health concerns may be:

“I don’t want to make HIV a topic, like an agenda item between us. It’s there and it has to be dealt with. If I had high blood pressure, I’d have a pill for that. It would be there. But it wouldn’t become an agenda item between us. It’d just be that’s what you’d do. I mean he knows about it. I know about it. I do what I’ve got to do and just move on... So it’s just part of normal living.”

For all but one of the couples, home provided a private safe space in which demands of HIV such as taking medications were a shared responsibility:

“I’ve kind of learned as time’s passed that he can be quite forgetful. Most mornings I’m like, ‘Babe, have you had your drugs?’ because sometimes he forgets.”

In other words, the support that partners received from each other and the habits they developed when living together ensured HIV remained on the periphery of their lives.

One aspect of shared life that could not quite slide into ‘normal’ was the question of blood. Although contact with blood was a rare event, the minority who mentioned it expressed particular caution around blood:

“If I cut myself in the kitchen, I’m paranoid about it. I will throw the food away. But I know it’s a fragile virus outside of the bloodstream.”

This participant knew that HIV cannot survive long outside the body, but he could not reconcile this with his own feelings of infectiousness. Although he has undetectable viral load and believes that his semen poses no risk of passing on HIV, he still felt that his blood was infectious. One of the reasons that a few men had this belief was that accidental cuts that bleed are such a rare event that they never thought it would need to be managed.

Outside the home, the couples found it harder to control how their shared HIV was regarded. This included uncertainty around how other people, including friends and family, might respond when told that one of the partners has HIV. Nineteen of the 21 participants said that HIV is still highly stigmatised in wider society:

"HIV is often insignificant in the ‘safe space’ of home, but still poses a challenge in couples' social or public lives."

Couples tended to be secretive about HIV in public, or to only share information with very close friends and family. There was a feeling that it was for the partner with HIV to decide whether or not to let others know about their diagnosis. In one of the relationships, the HIV-negative partner fully respected his partner's wish to keep knowledge of his HIV status firmly within the relationship, but still wanted someone to talk to:

“Part of me wanted people to talk to about what it felt like to be with somebody with a different HIV status to mine. And so, when this study came up, I was like ‘This might be an opportunity for us to talk to somebody about this weird, secret part of our lives’.”

In social life, stigma and silence around HIV often pushed shared experiences of HIV out of home-based normality towards social-based abnormality.

“When we’re getting ready to go, I know he often forgets to take his medication with him, so I’m like, ‘Don’t forget’. But if someone’s around, I can’t go ‘Have you packed your meds?’”

For most couples there was a degree of a tension between home life and public or social life. Although most couples had absorbed and accommodated HIV within their relationships in the home, there was a sense that HIV nagged at their social life. They wanted HIV to be a non-issue in public but they recognised, often reluctantly, that stigma was real and that it was the main reason they felt a difference between couples who live with HIV and those who do not.

The authors note that their study does have some limitations. Almost all of the participants were Caucasian, none were under the age of 31, all had comparatively high incomes, all live in a country where HIV treatments and viral load monitoring are easily accessible, and all were highly educated. It would be interesting to see researchers conduct similar studies in more diverse populations to see if the Sydney findings can be generalised.

Philpot SP et al. The ‘normality’ of living as a gay serodiscordant couple in Sydney, Australia. Sociology of Health & Illness, online ahead of print, 7 August 2020.

"In recent years, I’ve noticed on hookup apps that if a guy says he’s poz or undetectable, he’s likely my age or older. It’s left me feeling a bit—um, how shall we say?—vintage."
TheBody
10 May 22
Epidemiology & behaviour

Put in place during the AIDS epidemic, the rule that prevented adult sex venues from having rooms with locked doors no longer was needed due to HIV becoming a manageable disease and new infections in San Francisco precipitously dropping in recent years.
Bay Area Reporter
27 Apr 22
Behaviour change interventions