Stigma, ambivalence and other priorities – explaining poor adherence to PrEP and vaginal microbicides 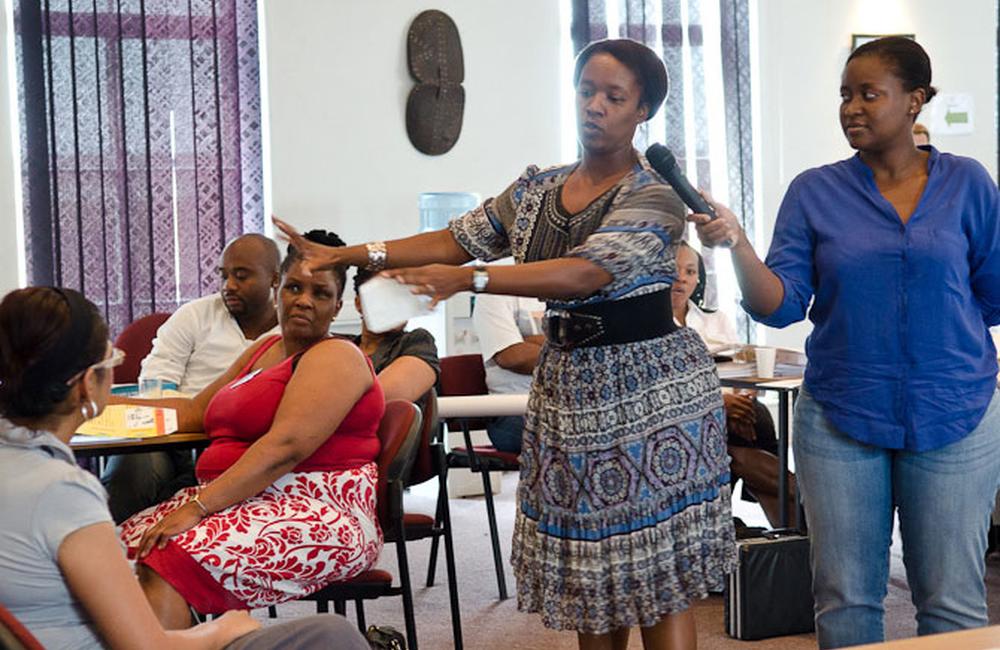 Image shows a training course for doctors at Wits RHI, where this study took place (www.wrhi.ac.za)
This article is more than 8 years old. Click here for more recent articles on this topic

HIV stigma, the danger of being mistakenly labelled as having HIV, ambivalence about the research process, confusion about the use of antiretrovirals to prevent infection, as well as the need to balance trial participation with other priorities and social relationships all shaped South African women’s experience of using pre-exposure prophylaxis (PrEP) or a microbicide gel within a clinical trial, according to a qualitative study.

The researchers sought to better understand the reasons for the disappointing results of the VOICE trial – one of the most ambitious studies of biomedical HIV prevention interventions for women ever conducted. Only a minority of trial participants had actually used the study product they had been given and the qualitative research aimed to find out why. VOICE’s results have raised significant questions about the applicability and appropriateness of microbicides and PrEP for women in African countries.

Ariane van der Straten, Jonathan Stadler and colleagues published the qualitative findings last week in the Journal of the International AIDS Society and also in a paper published earlier in the year in PLOS ONE.

The VOICE trial aimed to protect young women in South Africa, Uganda and Zimbabwe from HIV infection by providing either a vaginal microbicide gel containing tenofovir, an oral tablet containing tenofovir, or an oral tablet containing both tenofovir and emtricitabine. However, none of the three prevention methods resulted in fewer HIV infections than a placebo. This was most likely because of poor adherence – fewer than three-in-ten participants had detectable levels of the study drug in their blood or vaginal fluids.

For the qualitative research, 102 participants from the main VOICE trial took part in either a focus group discussion, an in-depth interview at the study clinic or in a series of ethnographic interviews, which involved a researcher spending several hours at their homes, engaged in open-ended conversation.

Of note, although the VOICE trial was conducted at 15 sites in three African countries, this qualitative study was only conducted with trial participants in Johannesburg, South Africa. The issues affecting adherence could be different in different contexts. A second qualitative study, whose results have not yet been released, has enrolled former study participants from all three countries.

Participants’ average age was 27; almost all had a primary sexual partner although less than half lived with him; half were employed; and most had moved to Johannesburg from elsewhere in southern Africa.

During interviews, a number of participants acknowledged skipping doses and occasional practical problems – such as nights away from home – that made adherence difficult. A few said that they became “bored” with the trial and the study product, but very few frankly discussed ongoing non-adherence. Most women maintained that they consistently used the study products, a finding clearly at odds with the biological evidence of generally low adherence in the trial. When interviewers raised this discrepancy, almost all women said they were aware of other participants who did not use the products regularly, often citing conversations in the clinic waiting room.

While some women had been motivated to take part in the study by the idea of being protected from a male partner’s infidelity and consequent risk of HIV infection, it was more common for women to enrol in order to access high-quality health care through the study clinic. Women valued the regular screening, the clinic facilities and the staff’s professionalism.

But in order to receive this care, women had to take experimental drugs of unknown immediate personal benefit. Moreover, there was considerable ambivalence towards medical research in the wider community, with questions raised about why black South Africans were being targeted in medical research and the potential exploitation of participants.

One interviewee recalled the comments of another study participant:

“Why don’t they do the research on themselves? They do it on us. I do not use that thing, I just put it there. I do not insert it. Why do they not use it? What if it causes a problem to us?”

“You know it’s scary to hear that you will take tablets meant for HIV-positive people if you know very well that you don’t have it. So that won’t just be easy on you, even when you tell someone else that you are taking these kind of tablets they won’t understand and they will think that you are lying and you have the disease or maybe at the clinic they will infect you with it because they are using us to test and their question was why don’t they test this on animals?”

Concerns were raised about the potential side-effects of the study products. Partners, family members and peers worried that the products could make participants “sick”, with a wide range of potential harms invoked, including infertility, cancer and HIV infection itself.

“So I sometimes think what if what my friends are saying is true, as they say ‘what if they are infecting you with AIDS using that gel?’”

There was considerable confusion over the purpose of the trial – many found the concept of using a pharmaceutical product to prevent infection difficult to grasp. The distinction between ‘prevention’ and ‘treatment’ was not clear to all. This was compounded when participants realised that the tablets and gels contained antiretrovirals (ARVs), something that was clearly associated with HIV-positive people and sickness.

“What I know is that ARVs are for people who are sick, why would they [researchers] give them to us even though we are not sick? I would not understand that because we are not sick.”

Not all participants had fully understood that they might be taking antiretrovirals, and reacted negatively when this was made clear during interviews. For example, one woman said that she would not use the gel if it contained ARVs and would drop out of the study. According to her, “ARV are for sick people” and not for prevention; she did not understand the reasons to give ARVs to healthy women. Although the regular health screenings and repeated HIV-negative results associated with taking part in the trial could create a sense of health and wellbeing, this sentiment was undermined by the use of antiretroviral medication.

Women saw ARVs as being extremely potent, able to return a person with AIDS to good health. But their potency was also understood in terms of side-effects.

“The tablets are also working because they have some reaction on us like some of us have headaches and become nauseous and stuff like that, so you would believe that means that these tablets have a certain possibility of reducing the risk of contracting HIV, you know.”

And this potency could also be seen as dangerous:

“I did have my concerns with these things since well it is part of the ARVs and you know what the ARVs does in your body[…] Even today I know that ARVs can react badly in your body so this [gel] in the long run, will it not affect me?”

The pervasiveness of HIV stigma in local communities meant that trial participants feared being mistakenly identified as HIV positive, which would result in discrimination and social isolation. Many went to great lengths to disguise their involvement in the trial, which made it more difficult to use the products regularly. Participants kept study products hidden, especially the tablets which were easily recognisable as ARVs. While the gel boxes were bigger and harder to conceal, fewer people knew what they were for.

“At times there will be a lot of people in the house and you know how it is like in South Africa. The bedroom serves a multi-purpose task of being a sitting room at the same time. Hence the bathroom is always the safer option where I would be able to do my business [insert gel] without disturbance from anyone.”

Concerns about the social consequences of being identified as living with HIV appeared to be greater than concerns about drug side-effects.

One interviewee described how the roommates of a fellow study participant had changed the way they treated her, for example refusing to drink from a cup she had used, which resulted in the participant finding a new place to live.

Some participants did challenge negative responses, for example by going with suspicious relatives to take an HIV test at a local clinic (in order to prove that they were not HIV-positive) or by sharing factsheets produced by the researchers. A few carefully disclosed their participation in the trial to others, in order to pre-empt gossip or seek support.

Nonetheless, the reactions and opinions of other community members undermined many women’s participation in the trial. The responses of male sexual partners could be especially important. They were not enrolled in the trial and rarely had a clear understanding of the research process or the use of antiretrovirals for prevention.

While some male partners did passively or grudgingly accept their partners’ involvement in the trial – generally when they did not think it affected their relationship or sex life – others objected to the vaginal wetness created by the microbicide gel. In common with other community members, many male partners were suspicious of the trial in general or raised questions about their partners’ real HIV status. Some felt threatened by products that might encourage women’s promiscuity. Such reactions forced many women into clandestine use or affected their willingness to use the products regularly.

“[My friend], she withdrew from the study because she did not want to lose her boyfriend. So she quit the study. So yes the influence from outside, wrong things that people say does have an impact.”

“More investments should be made to increase community-wide understanding of ARV for prevention, and to mitigate pervasive HIV stigma, which hinders access to prevention services,” recommend the authors.

They note that new HIV prevention interventions will not be readily embraced just because they are needed. “Only through a better understanding of the social and structural contexts in which these innovations are introduced can we perhaps facilitate the successful testing and adoption of efficacious bio-behavioural HIV prevention approaches that can be used by women.”

The findings are very similar to those from the similarly disappointing Fem-PrEP trial, including the finding that may participants signed on in order to get better clinical monitoring rather than due to an interest in volunteering for research.