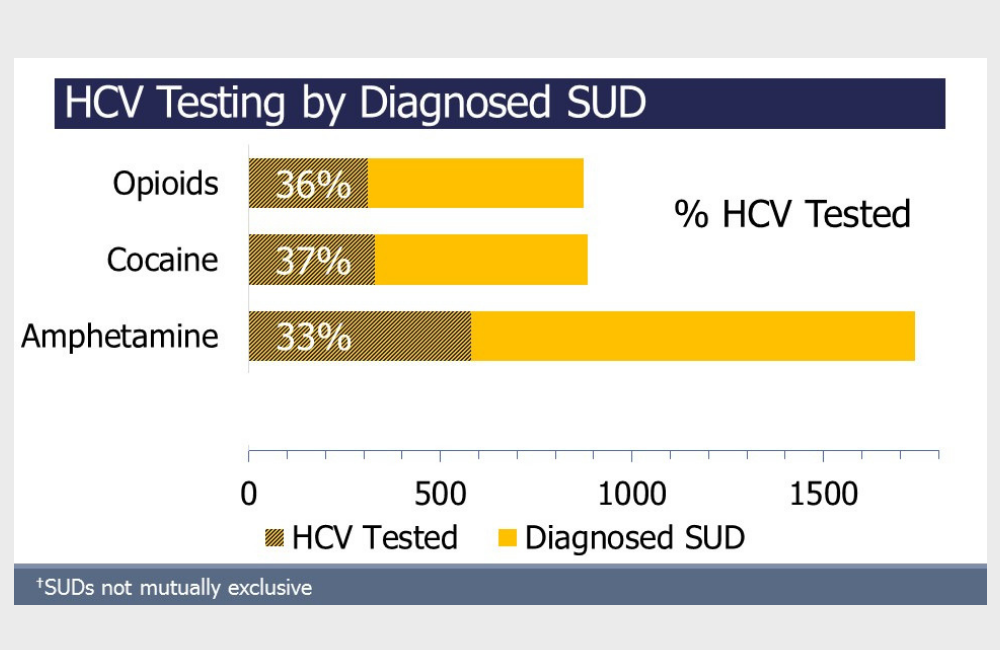 Only about a third of adolescents and young adults diagnosed with opioid use disorder in the United States are screened for hepatitis C virus (HCV) or HIV, even though injection drug use is one of the main risk factors for transmission, according to a study presented at the recent IDWeek 2018 in San Francisco.

Of those tested, 11% of opioid users were found to be HCV antibody positive, with lower rates among amphetamine and cocaine users.

Traditionally baby boomers born between 1945 and 1965 have had the highest rate of hepatitis C in the US, but the incidence of acute HCV infection has been rising among younger age groups in conjunction with the ongoing opioid epidemic. HCV infection rates have also risen among pregnant women and their babies.

This retrospective cohort study looked at electronic medical records from more than a quarter of a million young people who had at least one outpatient visit at 340 participating clinics in 19 states between January 2012 and September 2017. Those with pre-existing HCV infection were excluded.

Within this group, 23,237, or 9%, had been diagnosed with a substance use disorder and were included in the HCV analysis. By far the most common 'disorder' was cannabis use, affecting 7.5% of the full study population and accounting for more than 80% of all substance use diagnoses. Smaller numbers had diagnoses involving alcohol and amphetamines (0.6% each) and opioids and cocaine (0.3% each).

Among the 6812 youth who were tested, a total of 122, or 1.8% overall, were HCV antibody positive. (People who spontaneously clear the virus or are successfully treated remain antibody positive even when they no longer have HCV RNA in their blood.)

However, the rates differed substantially according to what substances they used, with drugs that are frequently injected conferring a higher risk. By subgroup, 11% of opioid users, 3% of cocaine users and 6% of amphetamine users tested HCV positive. Opioid use was associated with a 20-fold higher risk and amphetamine with a 9-fold higher risk of having HCV. The only other significant risk factor was older age.

Of the 122 youth who tested positive, 92 (75%) underwent follow-up HCV viral load testing, 42 (46%) had detectable HCV RNA and 15 (37%) received an HCV genotype test. HCV genotyping has traditionally been used to guide treatment selection and predict prognosis, but the newest combination regimens are highly effective regardless of genotype.

These data provide evidence for the need to improve HCV and HIV testing in youth, the researchers concluded.

"We’re missing an opportunity to identify and treat young people who are at risk for this deadly infection," Epstein said in an IDWeek news release. "The issue is complicated by the fact that not enough at-risk youth are screened for opioid or other drug use for a variety of reasons, including lack of time, comfort level between clinician and patient, and privacy and stigma concerns. And even when drug use is identified, there’s a belief that youth are less likely to test positive for hepatitis C, which isn’t necessarily the case as we show in our study."

Identifying young people with HCV is particularly relevant now, as the first treatment regimens for adolescents, sofosbuvir/ledipasvir (Harvoni) and sofosbuvir (Sovaldi) plus ribavirin, were approved last year for adolescents aged 12 to 17. The pangenotypic glecaprevir/pibrentasvir (Maviret) and sofosbuvir/velpatasvir/voxilaprevir (Vosevi) combos are not yet approved for this age group.

"Screening for opioid use disorder and other drug use, and then testing for hepatitis C in those at high risk, can help us do a better job of eliminating this serious infection, especially now that very effective hepatitis C medications are approved for teenagers," Epstein concluded.