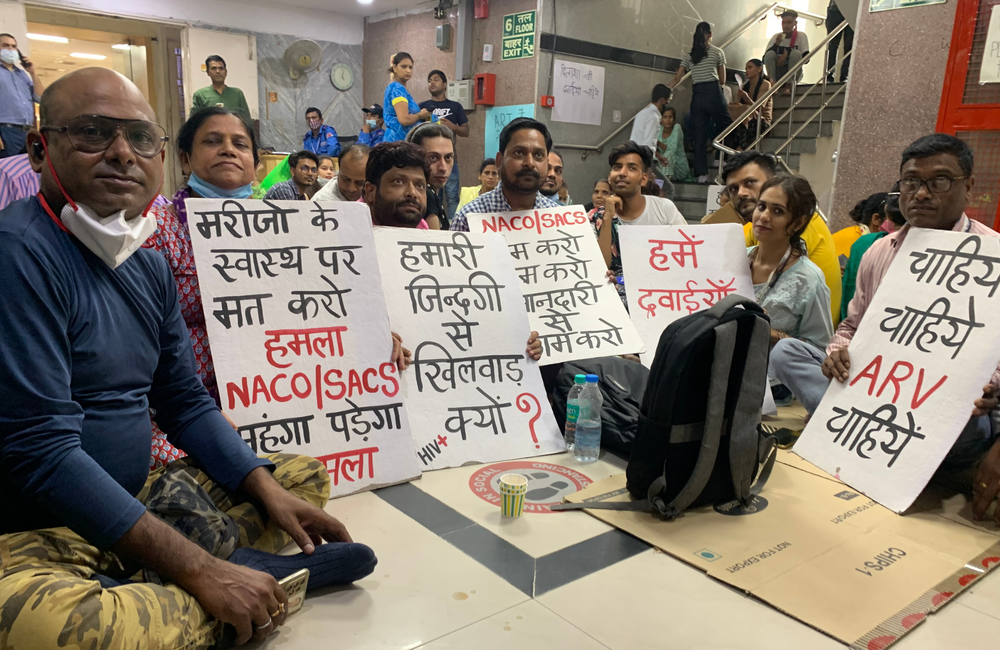 People living with HIV protesting outside the office of the National AIDS Control Organization in Delhi last week. Their sit-in, demanding an end to stockouts of dolutegravir and paediatric formulations, is ongoing. Photo: Bobby Ramakant.

A review by people living with HIV and those who inject drugs of HIV and hepatitis services in the Indian state of Manipur highlights gaps in these services, and has also shaped an evidence-based advocacy agenda.

This report, published in June 2022 by amfAR’s TREAT Asia programme, presents the findings of quantitative and qualitative data collected during March-December 2021 from Manipur where a community treatment observatory was set up based on the model developed by the International Treatment Preparedness Coalition.

A community treatment observatory involves community-based organisations collecting and analysing quantitative and qualitative data, using indicators locally developed by the service users and others. It helps in identifying gaps in services, and informs advocacy for improving them.

This report presents data and analysis from phase I of the community treatment observatory which focused on HIV and hepatitis services. In Manipur, interviews and focus group discussions were conducted with people living with HIV and/or those who inject drugs, as well as with health service providers to understand the reasons for problems.

Manipur is a north-eastern state in India bordering Myanmar, with a long history of drug use. High rates of HIV (and drug resistance to antiretroviral medicines), as well as co-infection with hepatitis C have been reported consistently among those who inject drugs in Manipur. It has an adult HIV prevalence rate of 1.15% in the general population, which is five times more than the national average of 0.22%. HIV prevalence among people who inject drugs is even higher at 7.66%.

Out of the estimated 28,000 people living with HIV in Manipur, 77% had started antiretroviral treatment. However, only 64% of those who started were still taking treatment one year later.

Despite national guidelines pushing for the preferred dolutegravir-based regimen, only 29% had made the switch to this regimen. People were receiving different regimens such as those with efavirenz or nevirapine, as “clinics are wanting to use up existing drug stocks, based on government’s instructions,” points out the report. “After stock is finished, they will be switched to dolutegravir.”

Although there have been recent news reports of drug stock-outs in many states, including Manipur, none were recorded in the report.

Less than one-third of those who were enrolled at the treatment centres got viral load testing twice a year, while 15% of them had never had a viral load test. Contrary to the government’s guidelines, viral load testing is just done for screening before switching to dolutegravir (or for testing for treatment failure), and not for routine monitoring of HIV treatment. At some centres, sample collection for HIV viral load test was only done one day a week and limited to 16 samples.

Do hepatitis services know their epidemic?

Staff shortages explain some of the gaps in hepatitis services, state officials told aidsmap.com. For HIV and hepatitis programmes to target interventions, data must be gathered and disaggregated for key populations. Dr Rosie Raj Kumari, Manipur State Nodal Officer of the National Viral Hepatitis Control Programme, told us that they could not collect disaggregated data for all the districts and did not even have a data entry officer.

Despite having hepatitis C viral load machines at treatment centres, they are not yet operational. “Although now we have Truenat machines (for point-of-care rapid molecular tests) in all the districts, we do not have dedicated human resources for managing them,” she said.

According to the report, during March-September last year, 1624 people were screened for hepatitis C, 99% of whom were found to be hepatitis C antibody reactive. Out of them, 80% were confirmed to have hepatitis C chronic infection. However, only 75% of them began treatment. More worrisome is that barely one-quarter were tested for sustained virologic response at week 12 (a marker for cure) and two per cent of them had treatment failure. But “the National Viral Hepatitis Control Programme does not have any specific data for retreatment of those who had primary hepatitis C treatment failure,” reads the report. Despite availability of hepatitis services, the uptake is crippled by range of access barriers.

During October-December 2021, six times more people were screened for hepatitis C than those screened in the previous six months, but data regarding their clinical care pathway is sketchy. It is not known how many of them had tested hepatitis C antibody reactive. Also, there are some inconsistencies in data. For instance, the number of people initiated on hepatitis C treatment is more than the number of those who had had a hepatitis C viral load confirmatory test.

Another reality check is that despite free government HIV and hepatitis services, some people are forced to pay for private services (such as HIV testing, baseline tests for initiating antiretroviral therapy and hepatitis C viral load tests). Medicines for opportunistic infections like cryptococcal meningitis are not provided, “as the cost is no longer supported by Manipur State AIDS Control Society,” according to the report.

Services not being available due to staff shortages, machines not working, long waiting times, high travel costs, unfriendly staff, and opening hours are some of the problems faced by the people in accessing services at government centres. This often forces them to pay for private services.

“This initiative is helping the community to understand the existing gaps so that we can demand evidence-based reforms in HIV and hepatitis C services,” Nalinikanta Raj Kumar of the Community Network for Empowerment – which led the community treatment observatory initiative in India – told aidsmap.com. “We have already started advocating with the government to make the necessary changes so that uptake of services improves.”

“Earlier, the turnaround time from sample collection to getting the report of hepatitis C viral load test was 30-45 days. This was one of the major treatment access barriers. Now, this time has been reduced to 5-7 days. Peer support staff was not recruited for the national viral hepatitis control programme since its launch in July 2019. Now, due to our evidence-based advocacy, the government has now identified the peer support staff from the community, who will soon be recruited at all the hepatitis treatment centres,” he shared.

Giten Khwairakpam of TREAT Asia told us that the community observatory had helped people complete the hepatitis screening, diagnosis, treatment and care pathway. “It is not just treatment uptake in case of viral hepatitis, but treatment completion and getting cured is also vital,” he said.

“This project gave an opportunity to raise treatment literacy,” Nalinikanta added. “It motivated communities to request their healthcare providers to switch them to dolutegravir-based regimen. Also, awareness increased on filing legal complaints about violations of human rights, including right to health, by utilising the free services of Legal Aid Clinic of Manipur State Legal Service Authority. Similarly, awareness rose about the importance of TB preventive therapy.”

Phase II of the community treatment observatory has been underway since January 2022.

A study presented at IDWeek shows that improving the current HIV care continuum would add years to the lifespan of Black MSM who acquire HIV, and that starts with addressing structural disparities.
TheBodyPro
24 Oct 22
Improving HIV care

A Journal of the International AIDS Society report, written by WHO technical experts, details 2022 guidelines on the trans community as part of its directives on HIV, viral hepatitis, and other STIs.
Pink News
19 Oct 22
Quality of life

For the first time since its inception in 2010, the National HIV/AIDS Strategy Implementation Plan 2022-2025 formally recognizes that quality of life indicators — including mental health, stable housing, socioeconomic challenges, and food security — are as important to HIV outcomes as viral loads and CD4+ cell counts.
Medscape (requires free registration)
6 Oct 22
Retention & linkage to care