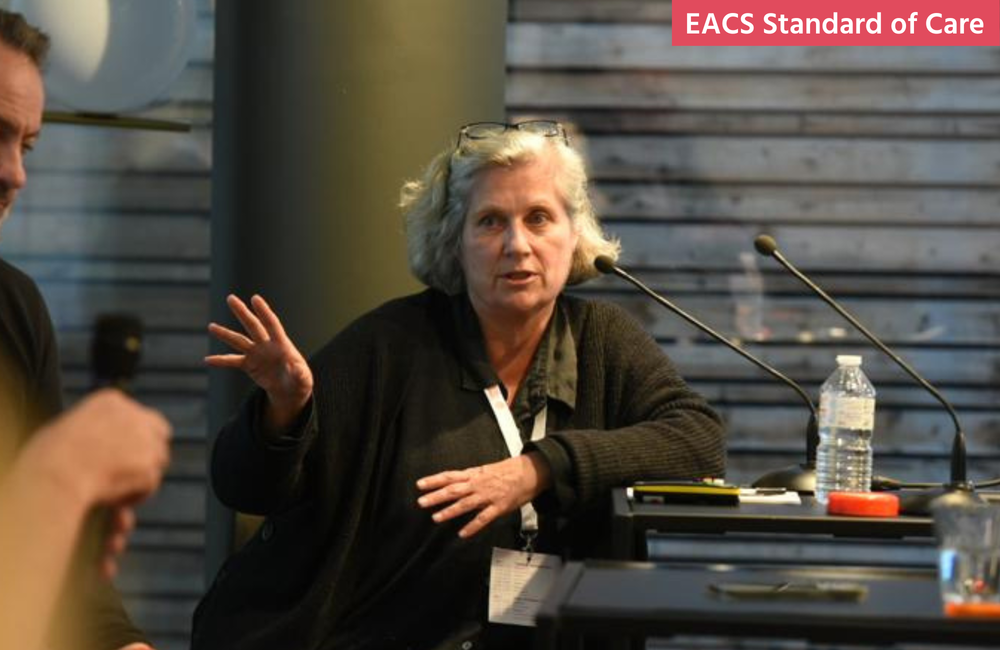 A re-audit of hepatitis care for patients living with HIV in four European countries, conducted by the European AIDS Clinical Society (EACS) and presented at last month’s Standard of Care for HIV and Co-infections in Europe meeting in Brussels, has found improvements in standards of service in most of the clinics audited.

Dr Ann Sullivan of London’s Chelsea and Westminster Hospital told the meeting that notable improvements included a change from annual to six-monthly screening for liver cancer in people with cirrhosis; an increase to virtually 100% in the proportion of people who had either had hepatitis C antiviral treatment or had it planned; and a large increase in the proportion of clinics who assessed and advised gay and bisexual men with HIV and hepatitis C co-infection about chemsex.

On the other hand, there had been no improvement in screening for hepatitis delta virus (HDV) and a puzzling decrease in the proportion of patients with antibodies to hepatitis C who were tested for viral RNA, which indicates active infection. This could be due to testing resources being diverted to COVID.

The hepatitis D (or Delta) virus only affects people who are already infected with hepatitis B, as it needs the hepatitis B virus to be able to survive in the body. Coinfection with HBV and HDV results in more severe complications than with HBV alone. The HBV vaccine protects against HDV because of the latter's dependence on the former.

At a previous Standard of Care meeting, Professor Chloe Orkin said: “An audit isn’t a piece of research, it’s a process. It’s an evaluation of clinical performance, not an outcome.” At the time, she was the chair of the British HIV Association, which pioneered clinical auditing within the HIV field.

In other words, Orkin said, an audit does not measure performance against externally set clinical outcomes, but against achievable targets within a setting. As such, it allows doctors, clinics and (in this case) countries to compare their performance with others; its aim is to understand facilitators and barriers to achieving improved clinical standards; and re-auditing to establish whether indicators have improved is an integral part of the process.

The COVID epidemic made planning for a re-audit or an ongoing audit programme impractical in 2020-21, but a somewhat smaller re-audit has now been done, against the background of the strain on services due to COVID, monkeypox and Ukrainian refugees who need HIV and hepatitis services.

The 2019 pilot audit was conducted in 23 HIV clinics in five countries (Georgia, Germany, Poland, Romania and Spain). It included a survey of individual clinic policies on issues such as the frequency of screening. There were also case note reviews covering the care that was actually provided to ten people newly diagnosed with HIV, ten patients co-infected with HIV and chronic hepatitis B virus (HIV/HBV), and ten with HIV and hepatitis C virus (HIV/HCV) in each clinic.

One country and seven individual clinics that were included in the initial audit did not take part in the re-audit, meaning 16 clinics in four countries participated. Because a clinic’s detailed audit results are only communicated to that clinic, clinics are not named and neither was the non-participating country.

The first question to compare policies between 2019 and 2022 was that of screening people with liver cirrhosis for hepatocellular carcinoma (HCC), in other words liver cancer. Two tests are involved here: an ultrasound scan and a blood test for alpha-Fetoprotein (aFP).

The above are clinic policies: the remaining results are gathered from case notes on actual patients. 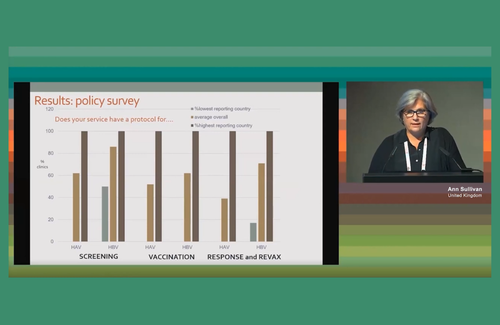 Ann Sullivan said that this was an excellent illustration of how an audit could work; if the clinic whose performance improved advised the clinic that did not on how they managed to increase their screening rate, this could be extremely useful. One of the most important aspects of an audit like this is that while public results are anonymised, the results given to clinics are not, and much of the value of audits lies in inter-site comparisons made afterwards.

Other areas of improvement included hepatitis C antibody testing in new HIV patients, which was already high in 2019 at 95% but improved to 100% in 2022, thanks largely to one clinic in country D which had only tested 80% of new HIV patients in 2019.

The proportion of people who were either immune to hepatitis A or B (because they had already had it) or were vaccinated for it was challenging to measure because many clinics referred people to other centres for vaccination, so they did not know with certainty who had received it. Once these onward referrals were discounted, however, it became clear that only about 20% of people were immune to hepatitis B and that 25% of people had receive a vaccine, so 55% were still vulnerable to infection. In many cases it was still unclear whether they had been vaccinated but in a significant minority, especially in country A, as many patients had turned down the vaccine when it was offered as had accepted it.

In hepatitis A over 50% were immune but only about 15% had definitely been vaccinated, so 35% were still potentially vulnerable. In some clinics, the number turning down this vaccine was greater than the number accepting it. Dr Sullivan commented that this was another area where further research was needed both on patient attitudes and on clearer pathways toward vaccination.

One other area of improvement was a notable increase in whether gay or bisexual male patients who had HIV/HCV co-infection were asked about chemsex. The proportion screened for chemsex increased from 25% to 60% and the proportion receiving active counselling is now 40% in those clinics who answered the question (not all knew or had it documented).

This left a couple of areas where there was disappointing progress. Clinics were asked how many of their patients with hepatitis B were screened for hepatitis delta virus, an infection that sometimes accompanies hepatitis B and makes it worse. While country B screened all patients with HIV/HBV, country A only screened 60% and country D 40%, while country C did not screen at all, only testing people if symptomatic. There has been little change since 2019.

In the case of PCR testing for hepatitis C, which is necessary to establish active infection in people who are HCV antibody positive, the situation had actually deteriorated, with 97% of eligible HCV antibody positive patients tested in 2019 but only 85% in 2022, and only 70% in country D. Only country A maintained a 100% record.

”It is hard to understand why”, Ann Sullivan commented, “given that HCV RNA resting is a standard part of patient services.” However, in the first year of the COVID epidemic some laboratories switched almost entirely to doing COVID RNA testing for a while.

It is exactly this sort of finding, whether of a relative difference in what is on offer clinically from time to time or from place to place, that auditing is set up to tackle.

At the meeting, EACS and the European Centre for Disease Prevention and Control (ECDC) announced an EU-funded collaboration to expand their audit programme, and this will be reported in the full report of the meeting soon.

Sullivan A. European re-audit on hepatitis screening, prevention and management in people living with HIV, 2022. EACS Standard of Care for HIV and Co-infections in Europe meeting, Brussels, 13-14 October 2022.

The U.S. Public Health Service Commissioned Corps announced Thursday, that it is changing its policies to allow future applicants living with HIV and chronic hepatitis B to join.
Advocate
2 Dec 22
Liver disease

More than a third of people living with HIV had fatty liver disease in a German cohort study, and a substantial number had moderate or worse fibrosis, researchers reported in the journal AIDS.
POZ
23 Nov 22
PrEP

Many people with HCV are eligible for PrEP, but most are not aware of it and even fewer are using it.
POZ
21 Nov 22
Hepatitis B

The efficacy of direct-acting antivirals in people with HIV and hepatitis C virus originating from Sub-Saharan Africa and southeastern Asia but living in Europe is high, according to a recent study published in Open Forum Infectious Diseases.
Healio
12 Oct 22
More editors' picks