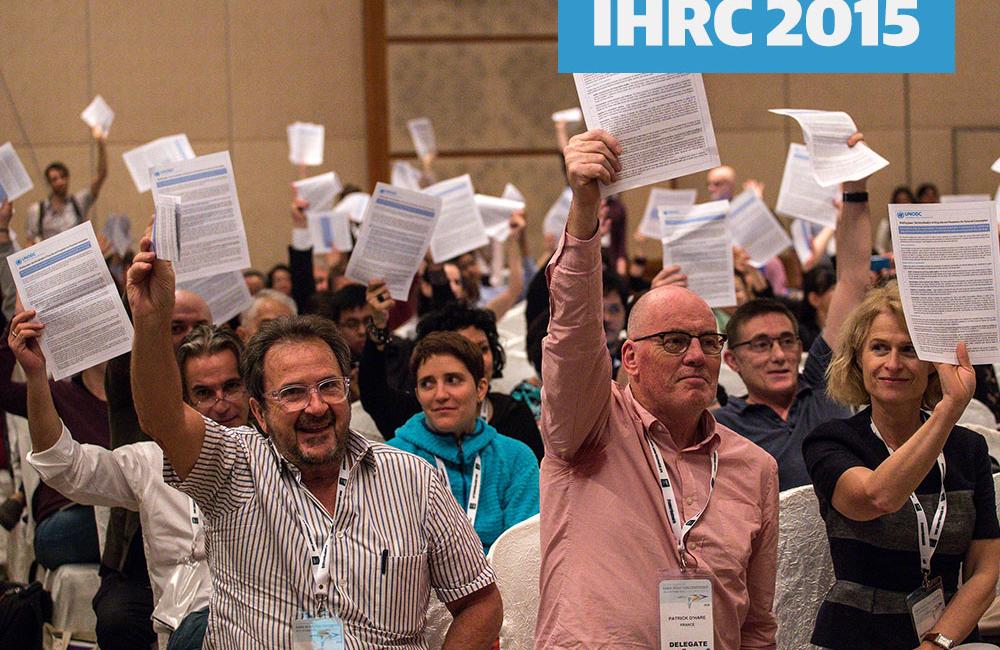 Numerous speakers said that punitive and prohibitionist drugs policies have restricted access to harm reduction services, contributed to the spread of HIV and hepatitis C, led to unnecessary drug overdoses, encouraged discrimination against people who use drugs, diminished respect for human rights, encouraged the use of compulsory treatment and resulted in the mass incarceration of people who use drugs.

Conference delegates argued that 2016 provides a key opportunity to change global policies on drug use. The United Nations General Assembly will be reviewing the drug control system over three days in April. The last time a special session on drugs was held, in 1998, it aimed to achieve a “drug-free world”.

Some advocates believe that the tide has now turned, with an increasing awareness both of how unachievable this objective is and of the harms caused by the criminalisation of people who use drugs. In particular, a number of Latin American governments are questioning the status quo. Advocates hope that next year’s UN General Assembly Special Session on Drugs (UNGASS) will be an opportunity to bring global attention to the impact of current policies and of the potential of different approaches.

“As long as a drug-free world remains the objective, harm reduction will be a secondary objective,” Ruth Dreifuss, a former president of Switzerland and a member of the Global Commission on Drugs Policy, told the conference.

Advocates believe that harm reduction should become a driving principle of national and international approaches to drug use, with a focus on protecting and improving the health and wellbeing of people who use drugs, rather than on punishment and prohibition. More broadly, they believe that policies must contribute to the broader UN objectives of human rights, public health, human security, and social and economic development.

While many of the UN member states are opposed to fundamental reform, some UN agencies including UNAIDS and WHO have long argued for a more pragmatic, health-based approach. There was excitement at the conference when a document from the United Nations Office on Drugs and Crime (UNODC) that supported the decriminalisation of the possession of drugs was leaked.

Prepared by the HIV/AIDS department of the agency, the document explains that “decriminalising drug use and possession for personal consumption is consistent with international drug control conventions and may be required to meet obligations under international human rights law.” It outlines the negative health effects of criminalisation (obstructing access to needle and syringe exchange, opioid substitution therapy and naloxone for overdose prevention) as well as its harms in relation to discrimination, social exclusion and incarceration.

However, apparently under pressure from the United States, UNODC withdrew the document and denied that it was a formal policy position. The agency said it was simply intended for dissemination and discussion at the Kuala Lumpur conference.

Conference delegates responded by formally commending the document and urging UNODC to publish it. “UNDOC has stated it wanted this document debated and discussed at our conference, and we are fulfilling those wishes,” said Rick Lines of Harm Reduction International. “The overwhelming support from our delegates today for UNODC’s drug decriminalisation recommendations should embolden them to show brave leadership on this issue.”

The optimism of some interventions was tempered by Annie Madden of the Australian Injecting & Illicit Drug Users League. “We need to be clear that decriminalisation of small amounts of drugs for personal use does not remove the black market. It remains our biggest challenge in relation to drug policy reform because it is the black market that drives the majority of harms,” she said.

“For people who use drugs, the options remain extremely limited: we are either criminalised or pathologised.” Drug users had to be recognised as being capable of contributing to this discussions about drug policy reform, she said.

The conference also celebrated the election defeat of Stephen Harper in Canada, a conservative who opposed harm reduction and fought an acrimonious battle against supervised injection facilities. Justin Trudeau, the new prime minister, says that he wants to see more supervised injection facilities opened across Canada. He has also pledged to legalise marijuana and revoke harsh laws on sex work.

Rick Lines closed the conference by “welcoming Canada back to the harm reduction community after ten years in the wilderness”.

Neglect of infectious diseases in prisons highlighted at AIDS 2016

UN report finds compulsory drug treatment facilities in East and Southeast Asia are not closing as planned, and many policy reforms have stalled

Two Joint Statements of the United Nations in March 2012 and June 2020 called for the permanent closure of compulsory facilities for people who use drugs. However, the number of compulsory facilities and people detained in the name of drug treatment has increased in most countries in East and Southeast Asia since 2012.
UNAIDS
13 Jan 22
Harm reduction

Drug addicts should be allowed to use illicit substances in “supervised injecting facilities” with medical staff on hand to ensure no one dies, health groups are urging ministers.
The Guardian
13 Dec 21
Drug policy & policing

What next for the Philippines’ war on drugs?

With President Duterte's term in office ending, an investigation by the International Criminal Court into the killing of drug users has been suspended.
The Lancet (free registration required)
10 Dec 21
Harm reduction

The only syringe service program (SSP) in Charleston, the capital of West Virginia, is officially approved to stay open. The final decision lay with the Charleston City Council—as required under a new law that places onerous restrictions on SSP.
Filter
10 Dec 21
More editors' picks