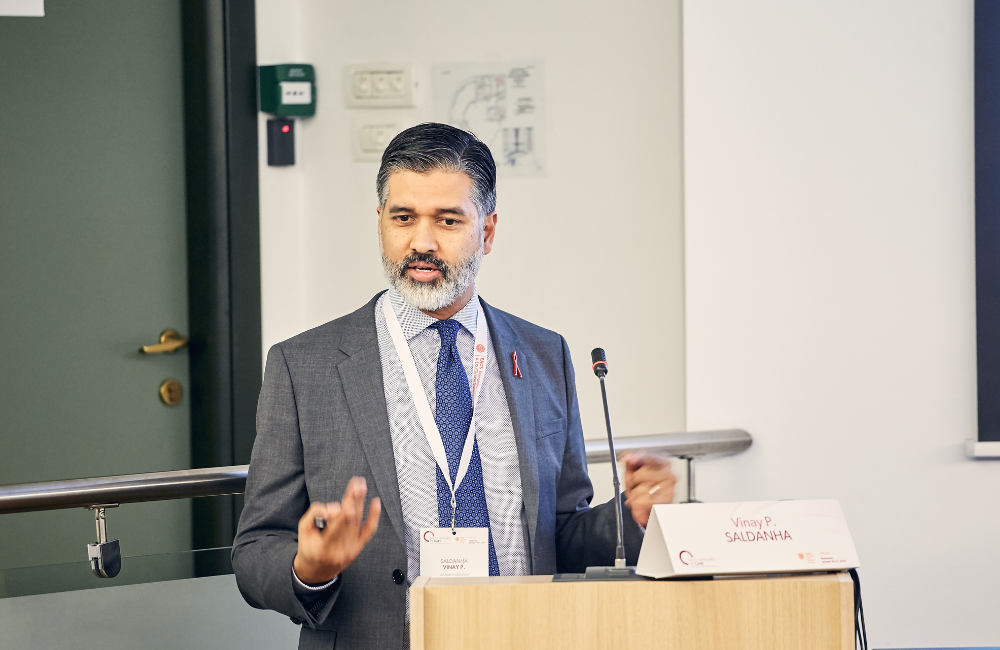 Vinay Saldanha at the Standard of Care meeting. Photo by Valentin Boboc.

Eastern Europe continues to have one of the worst HIV epidemics in the world outside sub-Saharan Africa, with the worst linkage to care of any region in the world, last week's meeting on Standard of Care for HIV and Coinfections in Europe heard.

The meeting was organised in Bucharest (Romania) by the European AIDS Clinical Society (EACS) with the aim of improving standards of HIV care and devising a minimal set of auditable standards that would help standardise and improve HIV care throughout the region. But first, attendees heard about the scale of the problem.

Vinay Saldanha, UNAIDS Regional director for Eastern Europe and Central Asia, told the meeting that 1.4 million people live with HIV in eastern Europe and central Asia, 75% of them in Russia. HIV diagnoses in the region increased by 60% between 2010 and 2016 and 34,000 people died of AIDS-related conditions last year.

However, there are signs that new diagnoses may have flattened off – even in Russia – and tuberculosis (TB) diagnoses have declined regionally. HIV diagnoses in eastern Europe are now overwhelmingly among the over-30s and the biggest increase has been among the over-40s, indicating an ageing epidemic.

There is an enormous task ahead to tackle what is still an AIDS emergency, but Saldanha said there were glimmers of hope. One indication that countries are tackling their epidemics with new resolve is that up till now, HIV drugs have been expensive and their procurement inefficient. New arrangements, both governmental and non-governmental, have negotiated dramatically cheaper prices in some countries, and smaller countries without the resources to negotiate big deals are forming regional buying consortia.

The HIV crisis in eastern Europe is primarily a crisis of linkage to care, not of testing. Last year there were 166 HIV tests per 1000 people in the eastern European region compared to 42 in the EU (and far fewer in Central Europe). This is primarily due to a tradition of public-health testing in Russia, with a quarter of its citizens tested last year. In Ukraine, a country with 10% of new infections in the region, 4.5% of people were tested but in Georgia, a small country with a growing epidemic in gay and bisexual men, hardly anyone was tested. Even in Russia, however, the people who need to be tested may be the ones missed – only a quarter of HIV tests were in the key populations at high risk – people who inject drugs and their sexual partners, gay and bisexual men, sex workers and prisoners.

The big problem is not testing but linking people to care and treating them. In eastern Europe 73% of people with HIV know their status but only 36% are on treatment and 26% virally suppressed.

There are signs however that regional governments have woken up to the scale of the problem. There have been two top-level summits of eastern and central European health ministers in Minsk (Belarus) in November 2016 and November 2018. A commitment was made to move towards universal treatment of all testing HIV positive and in 2018 nine out of the 15 countries resolved to claim patent protection status under the TRIPS agreement so they can manufacture and provide generic antiretrovirals (and anti-hepatitis C and TB drugs) in advance of patent expiry.

Armenia, which this year chairs the Eurasian Economic Forum, started moves towards a pooled procurement mechanism for smaller countries. And large reductions in the prices of some antiretrovirals have already been arranged.

In Armenia, Kazakhstan and Moldova, the national governments delegated the task of negotiating drug prices to already-existing international procurement platforms run by multilateral agencies UNICEF, UNDP and the Global Fund. In Kazakhstan this led, in 2016, to an 88.5% reduction in the price of the preferred first-line therapy of tenofovir, emtricitabine and efavirenz from US$956.00 a year to $109.50. The price has now fallen further to $83. As a result, the number of people on antiretroviral therapy (ART) in the country rose from 6000 in 2014 to 18,000 last year.

In Belarus and Russia, direct negotiations with local generics manufacturers have resulted in price drops that are almost as big. In Belarus, a reduction of 85% was negotiated last year in the price of locally manufactured generic tenofovir/emtricitabine pills, from $37.40 to $5.60 a month.

The plight of the co-infected: HIV and TB in St Petersburg

The HIV epidemics in eastern Europe are particularly hard to tackle because so many of those infected are injecting drug users and, partly because of this, a high proportion have co-infection with TB and/or hepatitis C. Professor Alexander Panteleev of St Petersburg State Medical University gave a sobering account of care for people with HIV/TB co-infection in the city.

In global terms, Russian TB prevalence is not especially high. Though TB is ten times more common than in western Europe, its prevalence of 60 people with active TB per 100,000 population is ten times lower than the prevalence in South Africa or the Philippines (TB is endemic in south-east Asia).

Additionally, TB prevalence in eastern Europe and central Asia has fallen in almost all countries in the last decade – by 44%, in Russia’s case. And although the prevalence of TB/HIV co-infection has risen, from 15 per 100,000 in 2010 to 24 per 100,000 in 2017, this is largely because of the increase in HIV cases, and is now starting to level off.

But that is not the challenge Russia is facing. The health emergency St Petersburg is dealing with is caused by the intersection of two factors – an ageing population with HIV who, in the absence of ART, are now increasingly unwell, and the fact that two-thirds are or were injecting drug users, with all that implies about reaching out to a criminalised, suspicious and sometimes chaotic patient group.

The degree to which the Russian HIV/TB crisis is all about linkage to care is shown by the fact that 85% of people with HIV and TB in St Petersburg have known their status for 7-10 years, yet are not in care. TB care is also complicated by the fact that severely immune-compromised people often have the disseminated, systemic form of the disease rather than the pulmonary one, and standard approaches to early detection of TB do not work in people with advanced HIV infection.

Another terrible legacy of lack of care, or rather of intermittent care and loss to follow-up, is the proportion of people who have TB that is multi-drug resistant (MDR-TB). Here the data are truly startling.

The World Health Organization defines MDR-TB as TB resistant to the two most powerful first-line drugs, isoniazid and rifampicin. It estimates that globally, 4% new and 19% of previously treated TB cases are of MDR-TB. MDR-TB is a significant cause of mortality. Globally, in 2014 54% of people treated for MDR-TB were cured while 18% died and 8% were left with continuing active TB.

In St Petersburg, the proportion of people with HIV and TB who had MDR rose from about 40% before 2011 to 70% since 2013. Nearly a quarter of people with HIV and MDR-TB live less than a year and half die within three years. And Russia’s mortality rate is not the worst: 7.3 out of 100,000 people die of AIDS-defining TB; compared to 8.7 in Ukraine and Azerbaijan and 9.9 in Turkmenistan.

Professor Panteleev said that there were three factors that had combined to produce something for which for once the phrase ‘perfect storm’ feels appropriate.

Firstly, the lack of social care for injecting drug users and people with HIV meant they dropped out of whatever systems there were, and they were very hard to find. Secondly, there was a problem with medical staff who were “intolerant to socially-deviant forms of behaviour”, and who lacked the training to work with active drug users. Thirdly, low levels of knowledge and education among patients and a pervasive distrust of healthcare workers and treatments meant that people avoided seeking treatment. In Russia, despair has led to a secondary epidemic of HIV denialism, with tens of thousands of people reading HIV denialist websites and subscribing to their beliefs, in an echo of the situation in South Africa nearly two decades ago.

How does one begin to tackle such an epidemic? Panteleev laid emphasis on something that became a theme during the Standard of Care meeting: although education and skilling of healthcare staff was vital, as was better social support for injecting drug users and others with HIV, there is no substitute for peer support. Russia’s co-infected drug users desperately need the national, regional and local authorities to recognise the value of local NGOs who can support and train peer navigators to assist their fellows on the hard journey back towards health.

Panteleev A.Tuberculosis and HIV coinfection still a challenge in Central and Eastern Europe. EACS Standard of Care for HIV and Coinfections in Europe, Bucharest, January 2019.