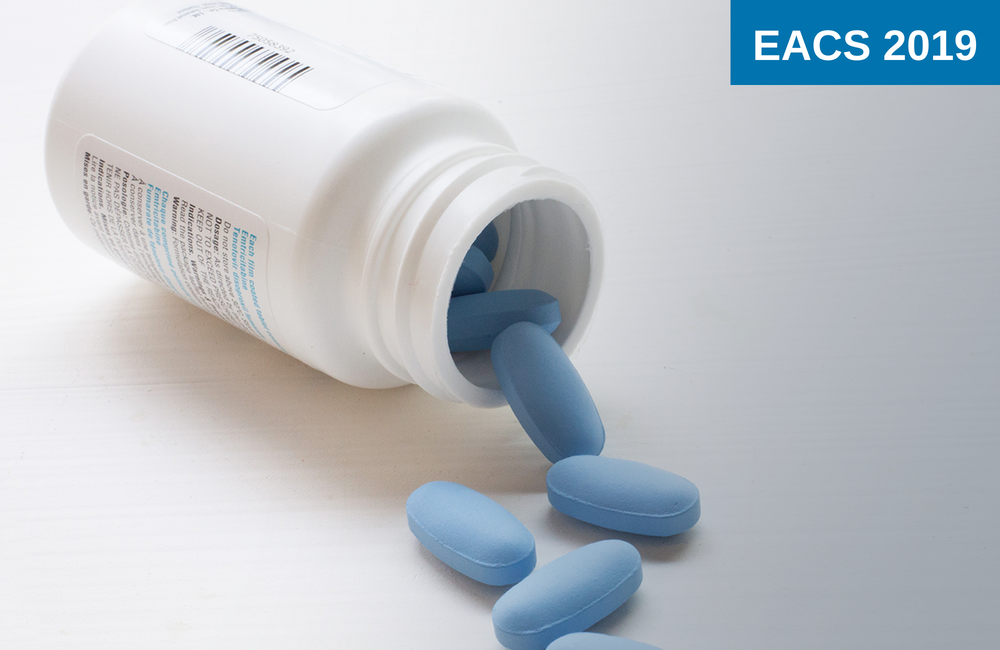 The 96-week results of the DISCOVER trial, which compared the efficacy and safety of two different formulations of the antiretroviral drug tenofovir when used as daily PrEP by gay and bisexual men, were announced at the 17th European AIDS Conference (EACS 2019) in Basel last week.

The primary results of DISCOVER were presented at CROI in February this year, but at that point only half of participants had completed the full 96 weeks of the study. The European presentation therefore rounds out the results.

DISCOVER was a large international trial (5387 participants) that compared tenofovir alafenamide (TAF) against tenofovir disoproxil fumarate (TDF) when used, in combination with a second drug, emtricitabine (FTC), as PrEP. The two drugs are given in one single pill: the TAF/FTC combination is patented and sold by its makers Gilead Sciences as Descovy and the TDF/FTC pill as Truvada, though cheaper TDF/FTC generic versions are replacing Truvada as it reaches the end of its patents.

As this report explains, the difference between TAF and TDF is that the former is absorbed rapidly by cells and spends little time in the bloodstream. This means it gets to its site of action faster and also places less burden on the kidneys. Excess TDF in the bloodstream is excreted by the kidneys and this can cause damage to the kidney tubules. This also can mean that calcium-carrying proteins are excreted too fast, leading to loss of this mineral in the bones.

Furthermore, some recent studies have suggested that TAF may have at least an accessory role in weight gain and raised cholesterol, raising questions that were further accentuated by studies presented at EACS.

Nonetheless, the DISCOVER study did find differences in kidney function and bone mineral density that, in this large study, were statistically significant.

In the results presented at CROI there had been seven HIV infections in the Descovy arm and 15 in the Truvada arm. Since then, one more infection was seen in participants taking Descovy.

This means that annual incidence in participants allocated to Descovy was 0.16% (one infection a year per 625 people) and in Truvada, 0.30% (one infection a year per 333 people). Although this means that there were 46% fewer infections in the Descovy arm, this difference was not statistically significant; the 95% confidence interval of the study (its “fuzziness”) means that if one were to rerun the study 20 times, random effects would mean that the result could have turned out to be anything between 77% fewer infections on Descovy to 26% fewer on Truvada. So we can’t say Descovy has superior effectiveness as PrEP, though there is a trend in that direction.

As reported here, Gilead did a separate post-hoc analysis (one not planned in the original study protocol) where they compared HIV infections in people with high adherence to daily PrEP with medium or low levels of adherence (using as threshold drug levels in blood indicative of four or more doses a week, two to four or below two).

In contrast there was a significant difference in laboratory markers of kidney function and bone mineral density.

In terms of adverse events generally, there was no difference between the study arms in drug-related adverse events of any grade (21% on Descovy and 24% on Truvada), in serious adverse events that were drug related (0.1% to 0.2%) or in adverse events leading to drug discontinuation (1% vs 2%).

It is, though, worth noting that baseline GFR in participants was 123 and 121ml/min in the two arms. Given that the threshold for kidney impairment is usually taken as 60ml/min, it’s clear that the GFR differences seen are on average nowhere near enough to produce clinical effects.

A different measure of kidney function is the proximal tubular protein to creatinine (PTP:cr) ratio, which measures the health of kidney tubules a little way further down their course. Here what you don’t want are raised levels of protein in the urine. There was, by one measure, a rise of 20% in the PTP:cr ratio in participants on Truvada and none on Descovy.

There were six discontinuations due to kidney impairment in participants on Truvada (one was a case of the serious acute dysfunction called Fanconi syndrome) and two on Descovy. While this was not a statistically significant difference, the differences in GFR and PTP:cr ratio were (p = <0.001).

As weight gain on TAF has now become an issue, the poster presented also gave details of that. After 96 weeks, participants on Descovy had gained 1.7kg on average and participants on Truvada, 0.5kg. Cholesterol or other cardiovascular outcomes were not reported.