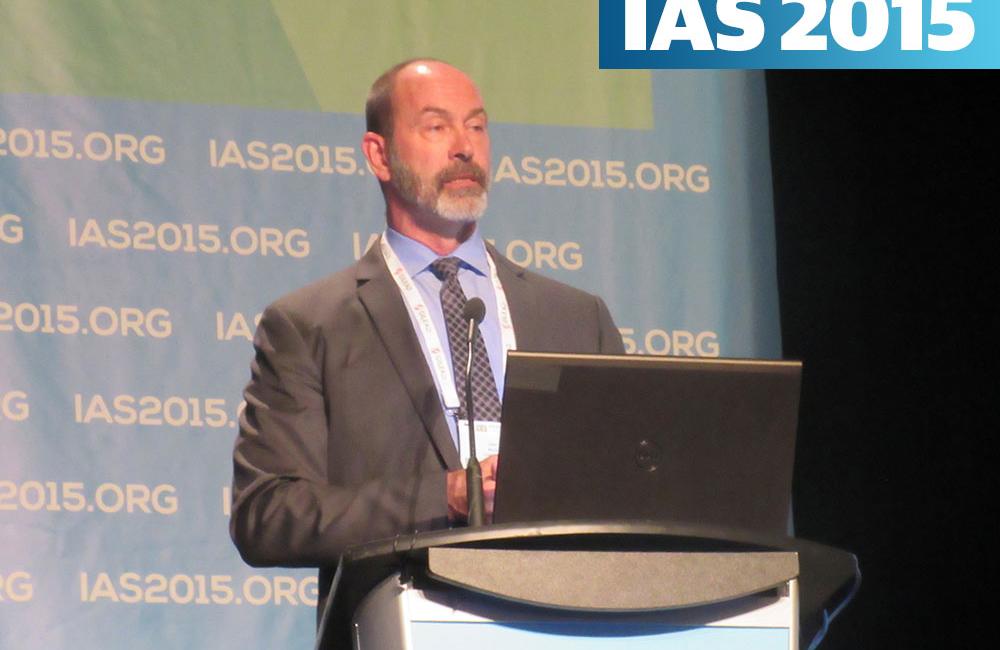 Tony Mills at IAS 2015. Photo by Liz Highleyman, hivandhepatitis.com
This article is more than 8 years old. Click here for more recent articles on this topic

People who switch from the current version of tenofovir to tenofovir alafenamide (TAF) – a new formulation that reaches higher levels in HIV-infected cells – maintained undetectable viral load and saw improvements in kidney function biomarkers and bone density, according to a pair of studies presented at the Eighth International AIDS Society Conference on HIV Pathogenesis, Treatment and Prevention (IAS 2015) last week in Vancouver, Canada.

Gilead Sciences' tenofovir disoproxil fumarate(Viread) is one of the most widely used antiretroviral drugs. It is a component of the Truvada coformulation – used for both HIV treatment and pre-exposure prophylaxis (PrEP) – and of the single-tablet regimens Atripla, Eviplera and Stribild. Tenofovir disoproxil fumarate(TDF) is generally considered safe and well-tolerated but it may cause a small amount of bone loss soon after starting treatment and lead to kidney problems in susceptible people.

TAF is a new pro-drug that delivers the active agent, tenofovir diphosphate, more efficiently to cells. TAF produces adequate intracellular drug levels with lower doses, which means much lower concentrations in the blood plasma and less drug exposure for the kidneys, bones and other organs and tissues.

Two phase 3 clinical trials, presented at this year's Conference on Retroviruses and Opportunistic Infections (CROI), showed that TAF is as effective as TDF for previously untreated people, but has fewer detrimental effects on the kidneys and bones compared with the current version.

At the IAS conference, Tony Mills of the Southern California Men’s Medical Group in Los Angeles presented findings from another phase 3 study, this one looking at treatment-experienced people who switched from the old to the new tenofovir formulation.

This analysis included 1436 people living with HIV who had normal kidney function and who at study entry had suppressed viral load (<50 copies/ml) on one of the following combination regimens for at least 96 weeks:

Participants in this open-label study were randomly assigned to either remain on their current TDF-containing regimen or switch to a new single-tablet regimen consisting of TAF (10mg), emtricitabine (200mg), elvitegravir (150mg) and cobicistat (150mg) – essentially a new version of Stribild that substitutes TAF for TDF.

Most study participants (about 90%) were men, two-thirds were white, 19% were black (a group at higher risk for kidney problems) and the median age was 41 years. The median baseline CD4 cell count was approximately 670 cells/mm3. At study entry, they were required to have an estimated glomerular filtration rate (eGFR) – a measure of kidney function – above 50 ml/min using the common Cockcroft-Gault method, with a median of 107 ml/min (>90 ml/min is generally considered normal). About 9% had grade 1 or mild dipstick proteinuria (protein in the urine) but less than 1% had grade 2 or moderate proteinuria.

Both treatment regimens were highly effective, showing that switching to the TAF regimen was non-inferior to staying on a TDF regimen, Dr Mills said.

After 48 weeks of treatment, virological response rates were high in both groups: 97% of people who switched to the TAF coformulation had undetectable viral load (<50 copies/ml), compared with 93% of those who stayed on their existing regimen – a significant difference in favour of TAF. Virological failure was likewise low in both groups (about 1%). People who switched from Atripla or atazanavir/Truvada to the TAF coformulation saw significantly better responses, while those who switched from Stribild did about the same.

Overall safety and tolerability were good in both treatment groups, with few discontinuations in either arm due to adverse events (0.9% in the TAF group vs 2.5% in the TDF group).

Most types of side-effects and laboratory abnormalities were similar in the two groups, although bilirubin levels were higher in the pre-existing regimen arm (likely attributable to some participants using atazanavir).

However, there were some notable differences related to kidney function and bone health.

Looking first at kidney function, two participants who switched to the TAF regimen and five people staying on their TDF regimen discontinued therapy due to kidney-related adverse events. There were no cases of Fanconi syndrome, a type of serious kidney disease, in the TAF study arm and one case in the TDF-containing arm.

People who switched to TAF experienced improvements in kidney function markers while those who stayed on TDF regimens worsened. Dr Mills noted that these changes began by week 2 and persisted through week 48.

Turning to bone health, spine bone mineral density (BMD) rose by an average +1.79% in the TAF arm while falling by a mean of -0.28% among those who stayed on existing TDF regimens. The corresponding mean changes in hip BMD were +1.37% and -0.26%, respectively. Both differences were statistically significant. People who switched to TAF saw significant improvements in osteopenia or osteoporosis of the spine and hip, which remained the same in the non-switch arm. Dr Mills noted that all fractures seen in the study were due to trauma, not fragility.

Fasting lipids increased by a small amount among people switching to TAF, although the total-to-HDL cholesterol ratio stayed about the same.

Particularly for women and others at risk for bone loss, or for people at risk for kidney function problems, TAF "provides a great new option," Dr Mills suggested.

Many experts advise against using TDF in people with impaired kidney function unless the expected benefits outweigh the risks. Current prescribing directions call for dose reductions for people with pre-existing kidney impairment.

This analysis included 242 participants with stable viral suppression. A majority (about 80%) were men, about 18% were black, the median age was 58 years and the median CD4 count was approximately 630 cells/mm3. Many had kidney disease risk factors including about 40% with hypertension and 14% with diabetes.

At study entry, participants had mild to moderate kidney impairment with eGFR ranging from 30 to 69 ml/min using the Cockcroft-Gault method (median 56 ml/min). About a quarter had grade 1 and 10% had grade 2 dipstick proteinuria, but none had grade 3-4.

Gupta noted that baseline characteristics were not matched between the groups taking TDF-containing and non-TDF regimens at baseline, with more women and black people taking TDF, and more hypertension and proteinuria in the TDF group.

At week 24, there were no significant changes in actual GFR (using the iohexol clearance test), regardless of whether people switched from TDF-containing or non-TDF regimens to the TAF coformulation.

At week 48, among participants switching from TDF to TAF, estimated GFR rose by a median of +0.2 ml/min using the Cockcroft-Gault method and by +2.7 ml/min/1.73m2 using the cystatin C method, the latter of which was statistically significant. Among people who switched from non-TDF regimens to TAF, eGFR fell by -1.8 ml/min and -1.4 ml/min/1.73m2, respectively, neither of which were significant.

At week 48, kidney markers in people who switched from TDF to TAF "seemed to approximate" those of people who did not take tenofovir at all, Gupta said.

The proportion of participants with clinically meaningful proteinuria (UPCR >200 mg/g) decreased from 47% to 13% and those with clinically meaningful albuminuria (UACR >30 mg/g) decreased from 55% to 22% when switching from TDF-containing regimens to TAF, both significant differences. Here too, changes were not significant for those switching from non-TDF regimens.

Finally, total cholesterol, LDL, HDL and triglyceride levels rose – and the total-to-HDL cholesterol ration worsened – after switching from TDF to TAF, while falling among those who switched from non-TDF regimens. The researchers said this was "consistent with [an] independent effect of circulating tenofovir on reducing cholesterol levels."

"These 48 week data support the renal and bone safety of once-daily, single-tablet [TAF coformulation] for adults with HIV and renal impairment," they concluded.

Asked about the mechanism of the improvements after switching from TDF to TAF, Gupta suggested we could be "taking the gas off mitochondrial dysfunction," but emphasised that this was "only speculation at this point."

Based on favourable study findings to date, Gilead has submitted the TAF/emtricitabine/elvitegravir/cobicistat coformulation for regulatory review in Europe and the US. The US Food and Drug Administration (FDA) is expected to make a decision by November.

In addition, Gilead has requested approval of a dual coformulation of TAF and emtricitabine – which would be a successor to Truvada – and is developing two other single-tablet TAF regimens, one containing the NNRTI rilpivirine (Edurant) and the other the HIV protease inhibitor darunavir (Prezista). Stand-alone TAF is also being developed as a treatment for hepatitis B. Gilead has indicated that it is collaborating with the US Centers for Disease Control and Prevention on a monkey study of TAF/emtricitabine for PrEP.