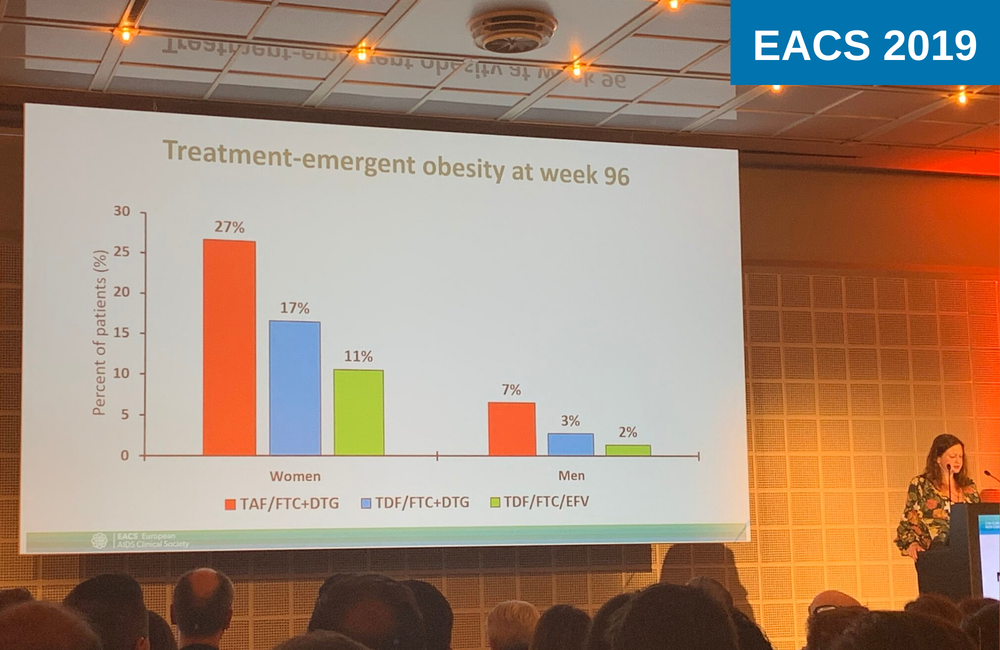 Furthermore, updated follow-up from the study showed that close to 60% of women in the TAF arm experienced a weight gain of at least 10% during the 96-week study. By the end of the follow-up period, approximately 75% were overweight or obese.

Forty-eight week efficacy results of the ADVANCE study were presented at the 10th IAS Conference on HIV Science in Mexico City in July, with 96-week data showing changes in body weight and body weight distribution.

This week, study investigators reported 96-week body composition results on a larger proportion of participants enrolled in the trial and also reported on the incidence of metabolic syndrome during the study.

The ADVANCE study is a large, randomised comparison of:

The study was designed to evaluate the efficacy and safety of dolutegravir in a South African population as the country prepared to introduce the drug, and to evaluate whether a nucleoside backbone containing the newer formulation of tenofovir (TAF) reduced the risk of kidney and bone toxicities in the South African setting.

Forty-eight week efficacy results showed that both dolutegravir-based regimens were non-inferior to the efavirenz-based regimen. However, the study also found a higher incidence of weight gain – as measured by changes in body mass index (BMI), absolute weight and emergence of obesity – in people who received dolutegravir, especially in those randomised to receive DTG/TAF/FTC.

This week, Dr Michelle Moorhouse of Ezintsha (Wits Reproductive Health and HIV Institute), Johannesburg, presented further information on changes in body composition in 531 participants who have completed 96 weeks of follow-up (1053 participants were randomised, 169 have discontinued, 77 became pregnant during the study and 276 have missing data).

Approximately 60% of participants were women, 99% were black and the mean CD4 cell count ranged from 323 to 349 across the three study arms. At randomisation, 35 to 37% according to study arm were already either overweight (BMI 25 to 30) or obese (BMI above 30).

As previously reported, the most pronounced gains in weight after 96 weeks after randomisation occurred in those receiving DTG/TAF/FTC (+6kg in men, +9kg in women). Body composition was assessed by DXA scan at weeks 48 and 96.

Treatment-emergent obesity and weight gain of 10% or more at week 96 were each more common in dolutegravir recipients and most frequently observed in DTG/TAF/FTC recipients.

“Most participants refused point blank to switch from dolutegravir – they don’t want to go back to efavirenz.”

Increases in weight gain in women were progressive and did not appear to plateau prior to 96 weeks, whereas in men weight gain was most pronounced up to week 48.

Treatment-emergent obesity – weight gain that placed a participant in the obese category (BMI >30) – was more common in women, but women had a higher mean BMI at baseline. Twenty-seven per cent of women and 7% of men became obese while taking the TAF-containing regimen, compared to 17% of women and 3% of men taking DTG/TDF/FTC and 11% of women and 2% of men taking the efavirenz-based regimen.

Asked how trial participants were being managed in the light of the findings, Michelle Moorhouse said that all study participants had been informed of the weight gain results and asked to give renewed consent to remain in the study. For the time being investigators are “watchfully monitoring”, she said, but added that “most participants refused point blank to switch from dolutegravir – they don’t want to go back to efavirenz” owing to its central nervous system side effects.