HIV infections lowered by 30% in universal testing and treatment study 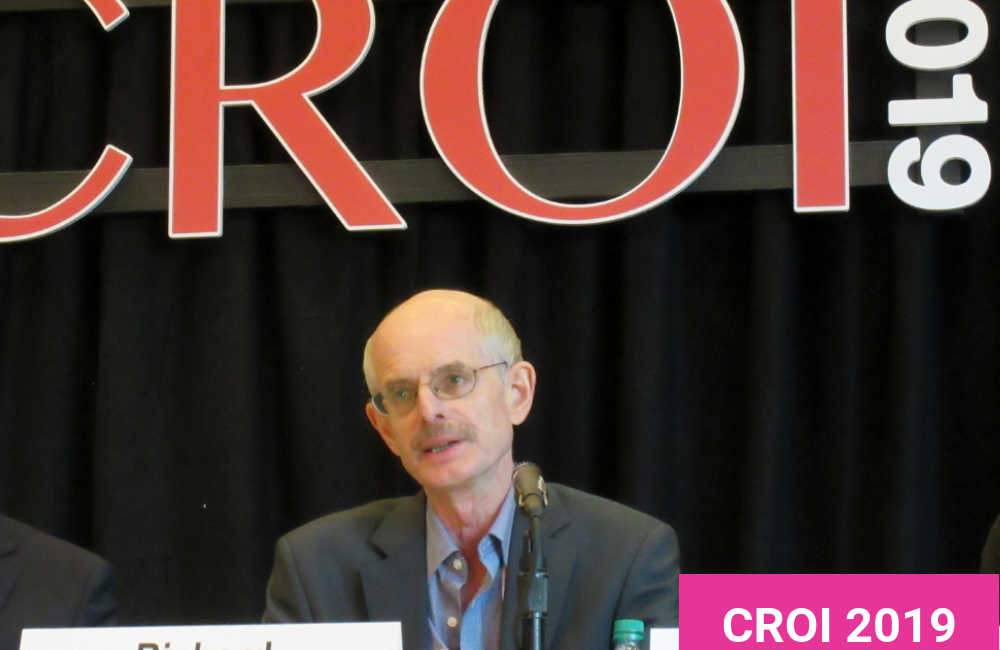 Communities in southern Africa which received a door-to-door HIV testing intervention and support for linkage to care had substantially lower HIV incidence, the Conference on Retroviruses and Opportunistic Infections (CROI 2019) in Seattle was told today.

This clear-cut effect was seen in the communities randomised to receive these interventions and treatment according to national guidelines, but as those guidelines changed to treatment-for-all early on in the life of the trial, the researchers believe it still provides evidence of the efficacy of the universal test and treat approach.

“Taken together with the findings of other studies, our results provide key evidence that the universal test and treat strategy can bring down incidence of new HIV infections, even in settings with severe generalised HIV epidemics,” Professor Richard Hayes of the London School of Hygiene and Tropical Medicine told a press conference.

PopART, also known as HPTN 071, was a large community-randomised trial carried out in Zambia and KwaZulu-Natal, South Africa. The study aimed to measure the impact on HIV incidence of household-based HIV testing and linkage to care by community health workers (lay counsellors) and immediate initiation of antiretroviral treatment delivered through routine health care services.

PopART was an important test of the feasibility of offering testing and treatment at a very large scale, essential for achievement of the 90-90-90 target of 90% diagnosed, 90% of diagnosed people on treatment and 90% of those on treatment virally suppressed. It is the largest HIV prevention trial ever done: around a million people live in the 21 urban communities in Zambia and South Africa where it was conducted.

While there have been several large trials of the ‘test and treat’ approach in African countries in recent years, their results have been mixed. The ANRS 12249 Treatment as Prevention study showed that a massive scale-up of HIV testing was feasible, but linkage to care was slow and there was no benefit in terms of HIV incidence. SEARCH offered HIV testing alongside screening for non-communicable diseases and achieved very high rates of HIV diagnosis and viral suppression, but not an overall effect on HIV incidence. The Botswana Community Prevention Project led to a 30% drop in HIV infections, although this was of borderline statistical significance.

The researchers developed a comprehensive intervention to support HIV testing and linkage to care. This involved community health workers systematically visiting all households within a geographical area and offering home-based HIV testing and counselling. Individuals found to be HIV positive were referred to government health clinics for immediate HIV treatment, regardless of CD4 cell count. Support was also offered for adherence, retention in care, HIV prevention, STI screening, TB screening, and male circumcision.

The community health workers returned to households throughout the year as necessary to follow up on referrals and linkages to care, and to offer HIV testing to household members who were absent at previous visits or who had declined testing. Hayes emphasised that this was a trial of universal testing, linkage to care and treatment – not just of universal treatment.

As in other ‘test and treat’ trials, this study design was made less clear-cut by shifting global recommendations concerning when people should start HIV treatment. When the study opened at the tail end of 2013, the Zambian and South African guidelines were recommending ART below CD4 cell counts of 350 copies/mm3. But within a few months, that level was raised to 500 copies/mm3. In late 2015, the World Health Organization recommended universal treatment, regardless of CD4 count, and this was implemented at the Zambian and South African trial sites in early and late 2016 respectively.

In terms of evaluating the impact of the intervention, the key data were collected between mid-2015 to mid-2018. Due to the guideline changes, for two of these three years, there was no difference at all between arms A and B. In addition, people in arm C were also receiving universal treatment, but not universal testing.

So it would seem that the results in arm B can tell us about a universal test and treat approach, even if it was not designed to do so.

To measure the impact of the intervention, the researchers recruited a random sample of 48,301 adults from the overall study population (described as the ‘population cohort’). The study’s primary outcome was changes in HIV incidence (new infections) at the population cohort’s month 12 and month 36 visits, which occurred between mid-2015 and mid-2018. A different team of research workers made annual visits to test these individuals for HIV, without offering the comprehensive package of interventions.

Those in the population cohort were predominantly young (39% were aged 18 to 24) and female (71%). Men were often away from home for work and it was hard to enrol them, despite repeated visits. At baseline, only around 55% of those living with HIV were virally suppressed.

Incidence was lower in each of the seven B communities than in its matched C community. Hayes said that such a consistent result is rarely seen in cluster randomised trials and is highly unlikely to be due to chance.

The lower incidence in arm B was most notable among women and people over the age of 25.

The researchers say it is puzzling that incidence was significantly lower in arm B (which received the comprehensive intervention and ART according to national guidelines), but not in arm A (which received the comprehensive intervention and universal ART throughout). They were expecting similar results in these two arms. If anything, a greater reduction in incidence should have been seen in arm A, which had universal treatment throughout the study, rather than for most of it.

What could explain the better results in arm B than in arm A? There is no evidence of sub-optimal implementation of the intervention in arm A. In fact, levels of viral suppression were higher (72%) in arm A than arm B (68%) and arm C (60%).

In the coming months, the researchers will explore possible causes. There is plenty of evidence in southern Africa that migration raises risks for HIV and it is possible that some of the communities randomised to arm A happened to have more mobile populations. Phylogenetic analysis of viral strains in the population may identify transmission clusters that could help explain the results. It is also possible that there were differences in sexual risk behaviour between the arms – data on STIs may shed light on this. But the result could simply be an unlikely chance occurrence.

“We found very strong evidence of an effect in the group that received treatment according to national guidelines,” said Professor Hayes. “The absence of a clear reduction in HIV incidence in the group that received the most intensive HIV prevention intervention is surprising and inconsistent with the group's rate of viral suppression. Further analyses of qualitative and quantitative data from the study communities may help us better understand this unexpected result.”

During questions and answers, he said that the team had conducted a post-hoc analysis which combined arms A and B, in comparison with arm C. This showed a statistically significant 20% reduction in HIV incidence.

“The overall evidence for the effectiveness of the intervention is strong,” Hayes said. “Community-based services for universal HIV testing and linkage to care are a key component of combination prevention in the global effort to achieve effective HIV control.”

England is on track to have diagnosed 95% of people living with HIV by 2025, putting it in a strong position to eliminate HIV transmission by 2030, say researchers at the MRC Biostatistics Unit, University of Cambridge, and Public Health England (PHE).
EurekAlert
24 Sep 21
Global health initiatives

The President’s Emergency Plan for AIDS Relief (PEPFAR) has entered its most consequential, indeed its most existential moment. Several reasons stand behind this claim.
CSIS
30 Aug 21
Global health targets

The new targets came in for criticism from IAS 2021 attendees, who questioned how achievable such a broad range of goals will be within a relatively short window of time — and with global attention still focused on ending the COVID-19 pandemic.
Devex
22 Jul 21
HIV treatment for children & young people

We interviewed migrants living with HIV in the UK and found that migrants are being left behind in the UK’s response to HIV, despite being disproportionately affected by HIV. Respondents said they experienced significant barriers accessing HIV testing, prevention, treatment, and care.
National AIDS Trust
23 Jun 21
More editors' picks