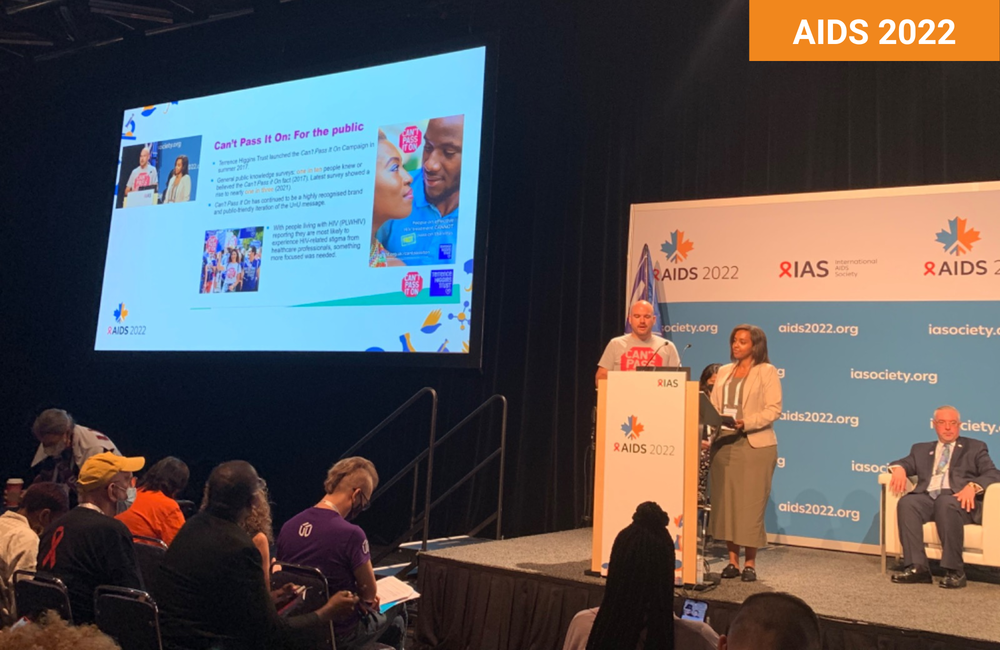 Richard Angell and Chamut Kifetew from the Terrence Higgins Trust at AIDS 2022. Photo by Matthew Hodson.

According to findings presented to the 24th International AIDS Conference (AIDS 2022) this week, there are still significant gaps when it comes to hearing about Undetectable = Untransmittable (U=U) and making sense of it for people living with HIV globally. A large part of this has to do with the role healthcare providers play in communicating – or distorting – this life-changing research finding.

Researchers, advocates and policymakers convened at a U=U Summit in Montreal prior to the official start of the conference to celebrate six years since the Prevention Access Campaign launched the U=U message, and four years since the 22nd International AIDS Conference (AIDS 2018), where the final results of the PARTNER 2 study were presented by Professor Alison Rodger. She clearly indicated that there is zero risk of sexual transmission from a person living with HIV with an undetectable viral load. This was the last in a series of studies showing the same finding.

And while there was a celebratory and uplifting mood in the room at the U=U Summit, there is yet much work to do before the benefits of U=U can be fully realised by all people living with HIV in diverse contexts.

“Such a situation significantly challenges the ability of gay and bisexual men to utilise proven safer-sex options and diminishes opportunities to disrupt pervasive stigma experienced by people living with HIV,” the authors conclude.

However, Asia is not the only region with low levels of U=U awareness and understanding. Dr José  Zuniga from the International Association of Providers of AIDS Care (IAPAC) presented findings from a survey of 3206 people living with HIV in seven cities in the global south: Jakarta, Indonesia (410); Kigali, Rwanda (421); Kinshasa, Democratic Republic of Congo (476); Lagos, Nigeria (582); Lusaka, Zambia (487); Maputo, Mozambique (422) and Yaoundé, Cameroon (408) were sampled. In all cities, apart from Jakarta (where it was just under half, at 46%), over half of the participants did not understand the meaning of ‘undetectable viral load’; this was as high as 88% in Kigali and 97% in Maputo. A number of participants feared that their healthcare provider would disclose their HIV status to others, ranging from 17% in Maputo to 84% in Kinshasa. A smaller percentage of participants stated that they felt unwelcome at healthcare facilities, from 12% in Lusaka to 28% in Kinshasa.

Dr Zuniga spoke about the pervasive stigma present in healthcare settings that prevents healthcare practitioners from openly communicating about U=U with people living with HIV. He said U=U knowledge needs to be integrated into medical school curricula to ensure that healthcare providers receive early exposure to it.

Dr Daniel Grace from the University of Toronto presented results from qualitative research conducted with sexual health practitioners in Ontario, Canada regarding how they communicate the U=U message to their service users.

Between 2020 and 2021, his team conducted three focus groups and eleven interviews with a total of 18 sexual health service providers (including nurses, public health workers, physicians, frontline providers and sexual health educators). The participants were asked questions about sexual health communication and U=U messaging. Thematic analysis revealed several barriers to communicating the U=U message. The first of these was that providers had some difficulty communicating the notion of ‘zero risk’ and some still referred to minimal or negligible risk.

“We’re kind of in that like space in public health where we’re like a little bit cautious to be like, then there’s ‘zero risk’, because we never talk about anything as ‘zero risk’, even though we can say there’s no realistic risk of transmission if you’re undetectable. So more so it’s just us saying like it’s a great way to greatly, greatly reduce your risk.”

One practitioner living with HIV, who was able to confidently express that “[I am] proof that it [U=U] works” still expressed caution when sharing the information with clients:

“Well because it’s [U=U] not 100%, it’s 99 whatever, so whenever you leave a little margin of error people will jump on that margin of error, they say, ‘Oh well there’s still a chance. Oh well, you know, it’s not guaranteed’ and, you know, I can’t argue that fact.”

Sometimes U=U wasn't discussed, because providers perceived the client as not being interested in receiving sexual health information.

“I think that we really need to focus on like that client-centred care of, you know, giving them the information that they want, and asking them if they have any questions, and asking them if they already know about certain topics, and figuring out how much information they want, and really basing it on the client’s needs and wants, rather than just our standard approach.” 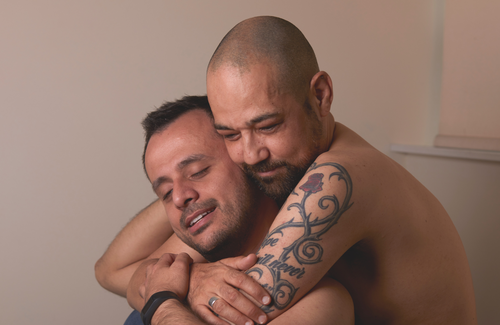 Basic information on what does undetectable = untransmittable (U=U) mean?

“I think even some people would be hesitant to believe that [U=U is] true because of the stigma attached to it and everything that goes along with it [i.e., HIV and transmission] and I think it’s like racism in the United States, it’s going to take a long time before people finally get it, that yes, you know, U=U. Actually U=U = U because there’s a universal aspect to it.”

Participants said there was a need for more culturally appropriate resources, for example for minoritised groups. They also reflected on the challenges of discussing U=U in the context of ongoing HIV criminalisation in Canada:

“Unfortunately, I have that dual role of someone in public health knowing all of the kinds of legal issues surrounding, or like the legal background, uh, for HIV, and then I have my own personal clinician views on things and those don’t 100 percent coincide all the time. . . My understanding is people still need to disclose that they’re HIV positive, even though they’re undetectable. . .if that’s not the case, then I think that’s a gap, and—and would be helpful in terms of just clarifying what the legal responsibilities are for folks.”

Brekyln Bertozzi, a community-based researcher and activist living with HIV, told the summit about the personal impact of hearing about U=U:

“In 2011, I had a routine visit with my family doctor. During my visit, I asked him if I could still have children. His answer to me was ‘No, I wouldn’t recommend it.’ Later, I was invited to a conference on women’s health and HIV and learned that it was possible for me to have another child. Hearing those words, I was so overcome with emotion, that I had to leave the room.”

One example of educating and training healthcare providers to confidently communicate U=U with their clients was provided by Chamut Kifetew and Richard Angell from the UK’s Terence Higgins Trust (THT). While their 'Can’t Pass It On' campaign was launched in 2017 for the public, they have more recently adapted the campaign into a series of online training modules for health professionals that are freely available and can be completed at any time.

Since World AIDS Day last year, the site has been visited 4603 times, with 225 quizzes completed. According to one GP who completed the training:

“Overall, this training is in my opinion, outstanding. It covers all the main learning objectives in a clear and concise way. I went away feeling very informed and confident in my knowledge, knowing the scientific research backing up the information.”

Outlining further necessary steps, the Prevention Access Campaign has issued a call to action, urging countries to support the U=U message and incorporate U=U into national efforts to prevent, diagnose, and treat HIV. The U=U Summit ended with Harold Phillips, Director of the White House Office of National AIDS Policy (ONAP), joining Canada in announcing that the US government’s support and calling on other nations to do the same.

Bavinton B et al. Awareness and use of Undetectable=Untransmittable (U=U) among gay, bisexual, and other men who have sex with men in five Asian countries: results of the Asia Pacific MSM internet survey. 24th International AIDS Conference, Montreal, poster EPC277.