We’re as confident now that undetectable gay men pose no risk of HIV transmission as we already were for heterosexuals, researchers say
Gus Cairns 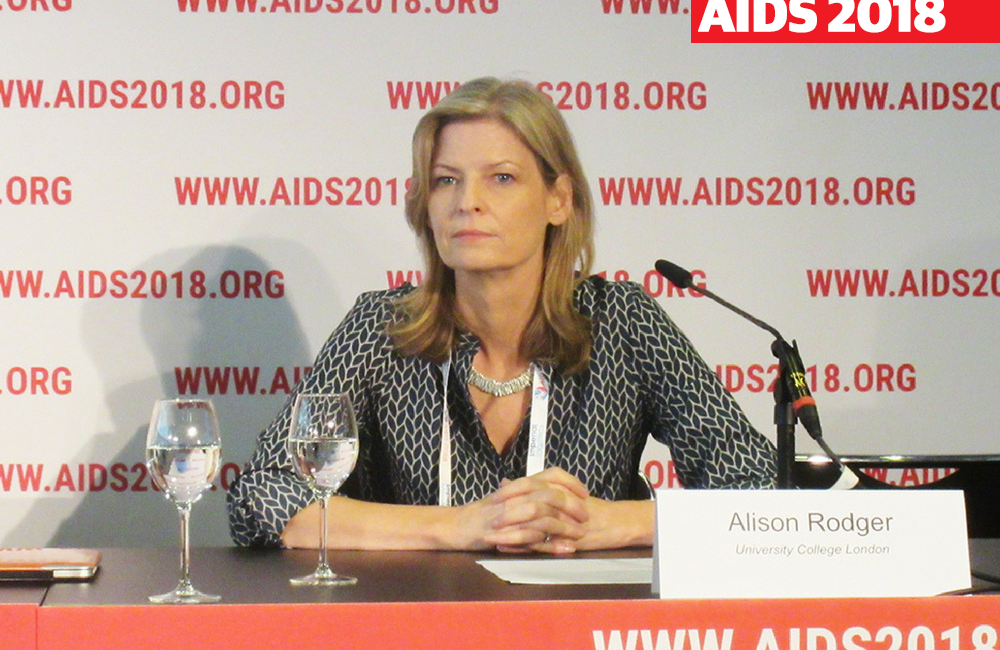 The chance of any HIV-positive person with an undetectable viral load transmitting the virus to a sexual partner is scientifically equivalent to zero, researchers confirmed at the 22nd International AIDS Conference (AIDS 2018) in Amsterdam today.

Results from PARTNER 2, the second phase, which only recruited gay couples, were presented today.

The results indicate, in the words of the researchers, “A precise rate of within-couple transmission of zero” for gay men as well as for heterosexuals.

The PARTNER study recruited HIV serodiscordant couples (one partner positive, one negative) at 75 clinical sites in 14 European countries. They tested the HIV-negative partners every six to 12 months for HIV, and tested viral load in the HIV-positive partners. Both partners also completed behavioural surveys. In cases of HIV infection in the negative partners, their HIV was genetically analysed to see if it came from their regular partner.

The study found no transmissions between gay couples where the HIV-positive partner had a viral load under 200 copies/ml – even though there were nearly 77,000 acts of condomless sex between them.

It is fitting that the results of PARTNER 2 appear on the tenth anniversary of an impassioned debate at the Mexico City International AIDS Conference in 2008 on the validity of the Swiss Statement, which was the first published document to say that, under defined circumstances, people with HIV who have fully suppressed viral loads due to treatment cannot transmit HIV.

At the time it was said that due to lack of viral load monitoring in anything but high-income countries, this fact – even if true – would have little relevance to most people with HIV.

There was also concern that telling people with HIV that they were not infectious if virally suppressed would be counter-productive because it would discourage safer sex. The more important message to give to people, some experts said, was that they should take every dose of their therapy.

The U=U (Undetectable equals Untransmittable) campaign was founded as a reaction to these positions.

The thinking behind U=U is that telling people they are not infectious if virally suppressed was a message of hope, and something earnestly desired by many people with HIV. It would help to combat the stigma against them, and their own self-stigma. By providing a powerful incentive to take treatment it could also have a positive impact on public health, as well as on individuals.

The Swiss doctors who issued the original 2008 statement apologised at the time that stating that people “do not” transmit HIV under the circumstances above was too definite, and that they had only meant to indicate that the likelihood of transmission was reduced.

But what PARTNER tells us is that they were right all along. People who are virally suppressed do not transmit HIV.

It was widely assumed at the time that sexually transmitted infections (STIs) might make people infectious even when they normally had an undetectable viral load.

But PARTNER tells us that STI infections have no impact on HIV infectiousness in people who are fully suppressed.

‘Zero’ needs a precise explanation. When principal researcher Alison Rodger announced the results of the first phase of the study, PARTNER 1, back in 2014, she said, of the risk of transmission by an undetectable partner, that “Our best estimate is, it’s zero”.

By ‘estimate’ she meant that it is impossible to prove that something will never happen. So researchers use confidence intervals. These do not state what the findings show, but what they can show. They define how precise their findings are.

Not all those couples provided what’s called “couple-years of follow-up” (CYFUs) throughout their time in the study. Couples only contributed to the data if they had had condomless sex since the last data were collected, if the HIV-positive partner had maintained a viral load under 200 copies/ml throughout, and if the HIV-negative partner had not used pre-exposure prophylaxis (PrEP) or post-exposure prophylaxis (PEP).

This meant that 783 male/male couples ended up providing 1596 couple-years of data, with an average eligible time within the study of 1.6 years. Couples reported on average 43 acts of condomless sex a year.

The 1596 couple years, containing an estimated total of 76,991 condomless sex acts, produced no transmission between partners. There were 15 new infections – but three-quarters of them reported recent condomless sex with a different partner, and genotyping of the HIV transmitted showed that not one infection came from the regular partner; six had a completely different subtype of HIV. Altogether, 285 of the HIV-negative men (37%) reported condomless sex with other men.

What this means is: if you ran the PARTNER study 20 times, there is a more-than-even chance that you’d miss a real transmission (or see a false one) in 435 couples followed for one year – or one transmission in one couple followed for 435 years.

And if you repeated the study only using the 19,836 estimated occasions of the HIV-negative partner being receptive, and the HIV-positive partner ejaculating, you’d miss a real transmission (or see a false one) once in 175 couples in a year – or once in 175 years in one couple.

These, to repeat, are very unlikely to reflect the true likelihood of transmission – they are statements about how likely it is that the zero transmissions observed might not reflect reality. It remains the case that the most likely probability, by far, that an HIV-positive person with a viral load under 200 copies/ml can infect their partner is zero.

The researchers were also able for the first time to compute the upper limit of the 95% confidence interval for the risk of transmission where one partner had an STI. This is higher, at 2.74%, or a 5% chance of seeing (or missing) one transmission per couple per 35 years – but again, the most likely risk was zero, and the only reason this zero is ‘fuzzier’ is because there were only an estimated 6301 occasions of condomless sex (of any sort) where one partner had an STI.

“We looked so hard for transmissions,” Alison Rodger told aidsmap.com. “And we didn’t find any.”

The last line in the last slide she presented today was “Undetectable = Untransmittable.”

Update: the full results from the PARTNER 1 and 2 studies for gay men were published in The Lancet  in April 2019. See Rodger AJ et al. Risk of HIV transmission through condomless sex in serodifferent gay couples with the HIV-positive partner taking suppressive antiretroviral therapy (PARTNER): final results of a multicentre, prospective, observational study. The Lancet, 02 May 2019. http://dx.doi.org/10.1016/S0140-6736(19)30418-0.