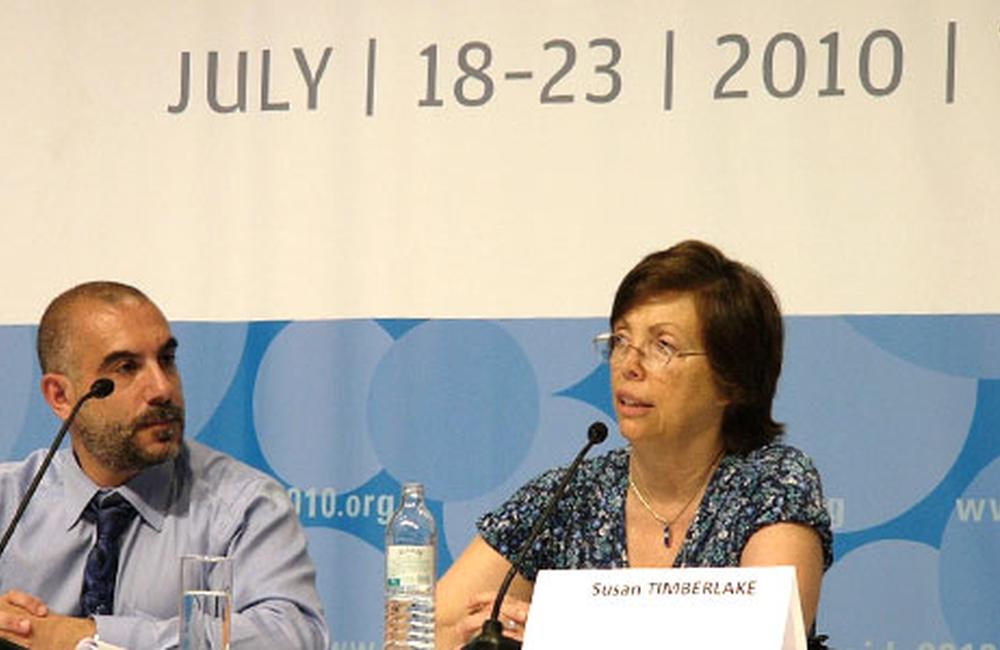 Edwin J Bernard and Susan Timberlake. Image by Paul Kidd
This article is more than 11 years old. Click here for more recent articles on this topic

Worldwide, at least 600 individuals have now been convicted of transmitting HIV or of exposing others to the virus, a satellite session at AIDS 2010 was told. Whilst by far the greatest number of convictions has occurred in North America and Western Europe, legislation that could be used in this way exists in many countries in the world. Moreover, a number of countries in Africa and elsewhere have introduced laws which single out the transmission of HIV for specific treatment.

GNP+ (the Global Network of People Living with HIV) has been running a Global Criminalisation Scan to monitor prosecutions since 2005; it currently has data on over 200 countries and judicial territories. Data were collected from legal databases and websites as well as contact with judiciary officials, public health workers, HIV organisations and people with HIV. There are likely to be missing data, so the figures are probably underestimates.

The 600 convictions that have been recorded occurred in more than 50 countries. Judiciaries in North America and Western Europe have convicted more people than all other countries put together.

The data for the US are thought to be incomplete, but here over 300 convictions have been recorded. The other countries with the greatest number of convictions are Canada (63), Sweden (38), Austria (30) and Switzerland (30).

France, Norway, the Netherlands, Germany and the United Kingdom have had between 13 and 15 convictions each.

Moono Nyambe, presenting, noted that if the numbers of convictions are compared to the numbers of people living with HIV in a country, Sweden and Norway actually appear to have the most punitive policies of all.

The United States is also notable for prosecutions of HIV exposure being brought when a low or zero risk activity was involved (for example, biting or spitting), for issuing severe prison sentences and for introducing HIV-specific laws (in 24 states).

Speaking at the same session, Susan Timberlake of UNAIDS stated that it was now a “corporate priority” of the organisation to “remove punitive laws, policies, practices, stigma and discrimination that block effective responses to HIV”.

She said that it was essential that advocacy did not limit itself to considering legislation, but also must consider two other parts of the legal environment: law enforcement and access to justice.

Working with legislative bodies to remove laws is an extremely complex and time-consuming process that requires political know-how and can backfire. Meanwhile, a great many countries (for example in Latin America) have legislation which could be used in a case of suspected transmission, but cases are in fact very rarely or never pursued.

Timberlake suggested law enforcement approaches (engaging with the police, prosecutors and judges who make decisions on taking cases forward or not) could be more productive. She said that any countries that do not yet have prosecutorial guidelines should be a high priority for this kind of work.

Moreover, more needs to be done to improve people with HIV’s knowledge of laws and their rights (‘legal literacy’) and access to legal support and services. This needs to take place in a context of broader efforts to reduce stigma and discrimination.

Timberlake also pointed out that in the debate on criminalisation, people on both sides of the argument struggle to find evidence to back up their positions. The evidence for the negative impact of criminalisation is largely anecdotal, and this is often insufficient to convince public health officials or legislators.

Picking up this theme, other speakers suggested that more research is needed to clarify the degree to which laws and prosecutions really do affect:

The satellite meeting, co-sponsored by NAM, coincided with the publication of HIV and the Criminal Law, a new guide to the use of the criminal law in prosecutions related to HIV transmission, written by Edwin Bernard and published by NAM at http://www.aidsmap.com/law

Laws criminalizing HIV non-disclosure in Singapore have not only remained in the books but were expanded in scope and severity.
Rice
28 Sep 21
HIV & criminal law

How local advocates worked with our global network to support a Malawian woman living with HIV prosecuted for breastfeeding – and what happened after she was released from prison.
HIV Justice Network
26 Sep 21
HIV & criminal law

Stop Asking Me to Protect You From My HIV

Regardless of one’s status, says the writer, we all deserve to live free from stigma―be it homophobia, racism, or HIV stigma.
TheBody
17 Sep 21
HIV & criminal law

California May Outlaw Stealthing, the Removal of a Condom Without Consent

In a first, California lawmakers are poised to make it illegal to take off a condom without a partner’s permission.
POZ
14 Sep 21
More editors' picks