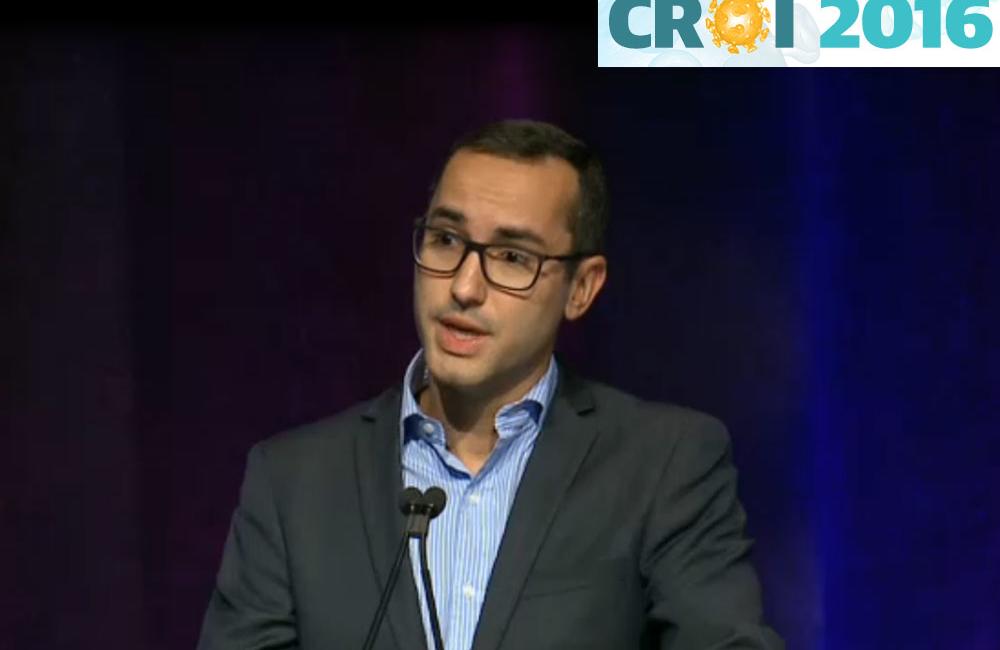 Treatment containing tenofovir is associated with a higher risk of bone fractures in people living with HIV, but a single infusion of zoledronic acid, a drug used in the treatment of osteoporosis, can protect against bone loss, two studies presented at the Conference on Retroviruses and Opportunistic Infections (CROI 2016) in Boston show.

HIV causes bone loss, and a large case-controlled study in Denmark has shown that HIV infection increases the risk of fractures. There is also evidence of a loss of bone mineral density in the first year after starting antiretroviral therapy.

Tenofovir use is associated with bone mineral loss, although in most people the extent of bone loss is modest, occurs mainly in the first year of treatment and its long-term consequences are unclear. In particular, previous studies which have identified bone loss in people taking tenofovir have not been able to show whether this results in a higher risk of fractures.

Since tenofovir is one of the most widely-prescribed antiretrovirals (contained in Truvada and several fixed dose combinations including Atripla), and because many people will take the drug for prolonged periods, it is important to know more about fractures and a more serious complication of bone mineral loss, osteonecrosis, in which bone dies.

Tenofovir and fracture risk in the EuroSIDA cohort

To address the question of whether tenofovir or other drugs are associated with a higher risk of fracture and osteonecrosis, investigators carried out an analysis of fracture risk and osteonecrosis in the EuroSIDA cohort, which follows people with HIV in Europe and Argentina.

Patients followed in the EuroSIDA cohort after 2004 were included in the study. The end-points were fracture, osteonecrosis, death or last follow-up. A series of analyses were conducted to determine the risk factors associated with fracture and osteonecrosis. Use of individual antiretroviral drugs (ever, current and cumulative exposure) was included in the final multivariate analysis.

The 11,820 patients recruited to the study were followed for a total of 86,118 person-years. Patients had a median age of 41 years and 86% were white. Median CD4 cell count at baseline was 440 cells/mm3 and 70% of patients at enrolment had an undetectable viral load.

During follow-up 618 fractures (incidence 7.2 per 1000 person-years) and 89 cases of osteonecrosis (incidence 1 per 1000 person-years) were recorded. Fractures most commonly occurred in the arms (122), legs (135) and ribs (44), although 202 reported fractures occurred at unrecorded sites. Of the fractures, 132 were recorded as osteoporotic (considered to have occurred as a result of reduced bone mineral density).

Asked why cumulative tenofovir exposure did not increase the risk of fracture, presenter Alvaro Borges of the University of Copenhagen suggested that the findings were consistent with the observation that bone mineral loss due to tenofovir treatment occurs in the first year of treatment and does not worsen with prolonged treatment.

No antiretroviral was associated with an increased risk of osteonecrosis.

This was a single-centre, randomised, double-blind, placebo controlled phase 2 study. Patients starting HIV therapy for the first time with no history of bone loss were eligible for inclusion. All participants received an antiretroviral regime of atazanavir with tenofovir/emtricitabine. Patients were randomised to receive a single 5mg infusion of zoledronic acid or placebo. The study lasted 48 weeks with assessment of bone turnover and bone mineral density at baseline and weeks 12, 24 and 48.

Sixty-three patients were enrolled. The majority (84%) were black and a fifth were women. Mean age at baseline was 40 years.

Therapy with zoledronic acid was associated with a 74% reduction in bone loss by week 12. The benefits persisted through to week 24 and 48 (65% and 56% reduction, respectively, relative to placebo).

By week 12, patients in the treatment arm had an 8% increase in lumbar spine bone mineral density relative to placebo, the difference increasing to 11% at weeks 24 and 48. At week 48, lumbar spine bone mineral density had increased by 2% in patients treated with zoledronic acid; this compared to a 4% decrease among patients who received the placebo. Lumbar spine T- and Z-scores were significantly higher among patients who received zoledronic acid versus placebo at all follow-up points (all p < 0.05). Similar trends were also observed at the hip and femoral neck.

Zoledronic acid was well tolerated with no major adverse events reported. Rates of viral suppression and CD4 cell increase were similar between the treatment and placebo arms.

The investigators conclude that a single infusion of zoledronic acid at the time HIV therapy was started prevented antiretroviral-induced bone resorption and bone loss at key fracture-prone body sites. The benefits of therapy were present at week 12 and persisted through 48-weeks of follow-up. The researchers suggest that zoledronic acid could be used as a prophylaxis against bone mineral loss during the first year of antiretroviral treatment and call for a multicentre randomised trial to confirm their findings.