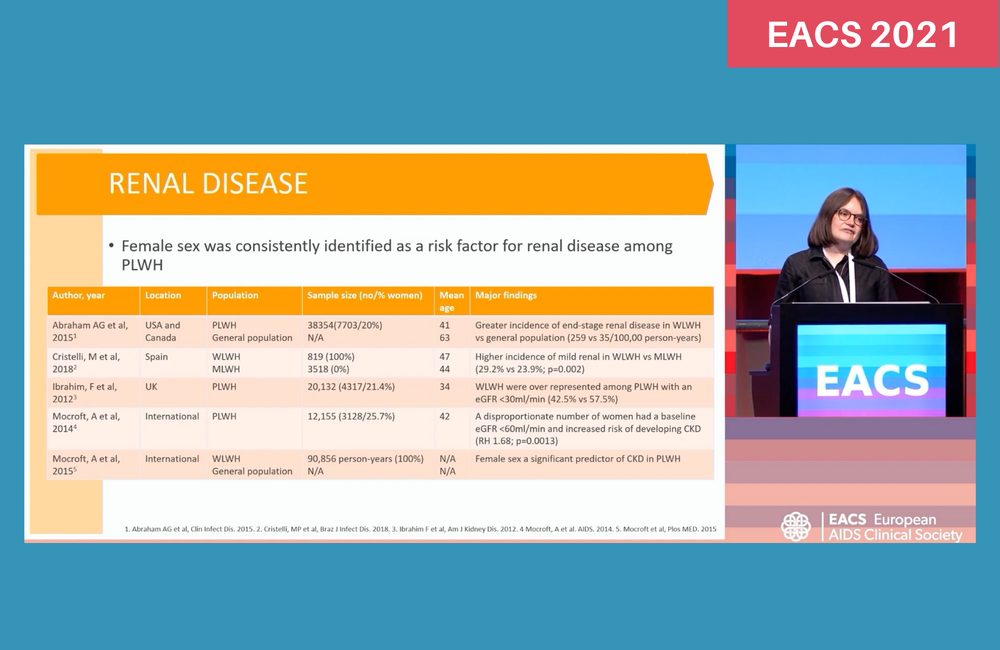 A systematic review of studies of medical conditions in women living with HIV has found large gaps in the data, particularly for women over 50. The studies that do explore this topic showed that women living with HIV are at increased risk of acute cardiac disease, reduced bone mineral density and poorer cognitive function than women in the general population, while their gender increases the risk of kidney disease. Whether the causes of the increased risk are biological or if other factors such as socioeconomic status and ethnicity are also contributing is unclear because of a lack of evidence.

Compared to their male counterparts, women living with HIV appear to have co-morbid diseases at a younger age and worse outcomes. Despite women making up more than 50% of HIV diagnoses worldwide, women are under-represented in research. Dr Sonia Raffe and her team conducted a review of studies that examined how common cardiovascular, kidney, bone and neurocognitive disease was in women living with HIV and presented their findings at the 18th European AIDS Conference (EACS 2021).

The researchers chose studies published between January 2010 and August 2020. The studies came only from resource-rich settings and had to have at least 100 women or have at least 50% female participants. In total 38 articles were used in the analysis, the majority of which were conducted in the USA.

Of the seventeen studies looking at cardiovascular disease, all six looking at acute cardiovascular events such as heart attacks and strokes found that women living with HIV were at greater risk compared to women who are HIV negative. One US study showed that women with HIV had a type of heart disease that was less likely to be identified with standard investigations and so the risk of acute cardiovascular disease could be underestimated. Another US study suggested that electrocardiogram (ECG) findings indicating a heart attack were often different in women compared to men and that women living with HIV were less likely to have the procedure to re-open their arteries. In this study, the women were younger and more likely to be Black, so discrimination could also be a factor as to why treatment differed between men and women.

Studies looking at the changeable risk factors for poor cardiovascular health, like high blood pressure, diabetes or high cholesterol, found that they are common in women and often not well managed, irrespective of HIV status.

In the six studies evaluating kidney disease, being female was consistently a risk factor for poorer kidney function in people living with HIV. The largest of these studies from the NA-ACCORD group had 7703 women. It showed a higher rate of end stage kidney disease in women living with HIV of 259 per 100,000 person years compared to 35 per 100,000 person years in the general population.

There were six studies investigating bone health. Two of these articles reported that women living with HIV had lower bone mineral density than HIV-negative women. A study of postmenopausal Hispanic and African-American women showed a greater loss of bone mineral density per year compared to their HIV negative counterparts. The data surrounding the risk of bone fractures was not consistent between studies, although it is important to note that only one of these studies focused on postmenopausal women.

There were nine studies examining neurocognitive disease, all from the USA, eight of which were from the same cohort. While HIV was found to impact particular areas such as memory, verbal learning and attention, other factors like age, education and socioeconomic status had a greater impact on cognitive decline. In women with HIV, having a lower CD4 count or higher viral loads also worsened cognitive function. Women in this cohort also reported high stress levels, irrespective of HIV status, which was also found to worsen cognitive function.

While conducting the review, Dr Raffe and her colleagues found that many large studies could not be included because of poor recruitment of female participants or because there was no analysis on differences between genders. The control groups were often poorly matched, and some studies did not account for confounding factors. Very few of the studies addressed the underlying reasons for health inequalities.

“In order to provide the best possible care for women as they age with HIV, it is essential that more research focussing specifically on women, explores the many complex drivers behind the increased burden of age-related comorbidities in this population,” Raffe and colleagues concluded.