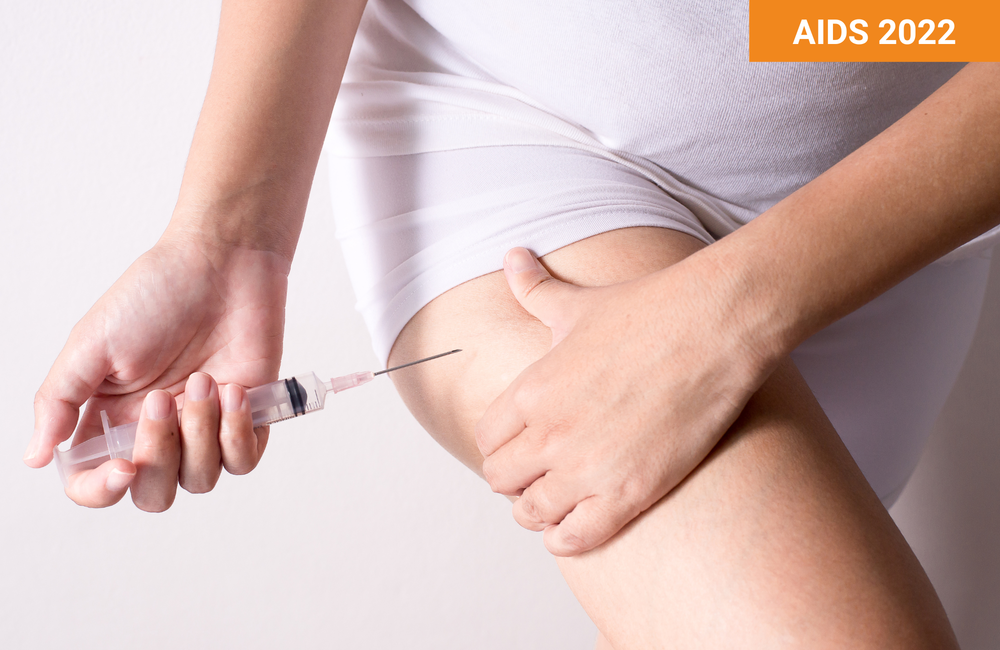 Injection of long-acting cabotegravir and rilpivirine into the thigh muscle led to mostly mild side effects and a pharmacokinetic profile comparable to that of standard buttocks injections, according to a study presented last week at the 24th International AIDS Conference (AIDS 2022) in Montreal. Another research team found that a higher-concentration formulation of injectable cabotegravir had similar safety and produced drug levels comparable to those of the current version.

Both studies could help pave the way for self-administration of cabotegravir plus rilpivirine for HIV treatment or cabotegravir alone for PrEP (regular medication to prevent HIV infection), which could overcome one of the main barriers to wider adoption of the long-acting agents.

Injectable cabotegravir, an integrase inhibitor from ViiV Healthcare, plus Janssen’s NNRTI rilpivirine is the first complete antiretroviral regimen that does not require daily pills. In Europe, the two injections are branded as Vocabria and Rekambys respectively. In North America and Australia, the two drugs are packaged together, with the brand name of Cabenuva.

Currently, they involve two separate intramuscular injections in the buttocks administered by a healthcare provider. The jabs contain a relatively large volume of liquid compared with, say, a typical vaccine.

As previously reported, the phase III ATLAS and FLAIR trials showed that dual injections of cabotegravir and rilpivirine led to sustained viral suppression both for treatment-experienced people who switched from a standard oral regimen and for those starting antiretroviral therapy (ART) for the first time. The follow-up ATLAS-2M study showed that cabotegravir plus rilpivirine administered every other month works as well as once-monthly dosing.

Participants in these studies generally expressed a high level of satisfaction with long-acting injections and said they preferred them over daily pills. But people using this regimen must visit a healthcare provider 6 or 12 times a year – more often than those on a stable oral regimen require viral load monitoring.

Although implementation studies (including some sponsored by ViiV) appear to show that patients and providers can adapt to regular clinic visits for injection administration, uptake of long-acting treatment and PrEP has been low so far. Enabling people to do the injections themselves at home could make this a more attractive option.

In the first study, Dr Kelong Han from GlaxoSmithKline (ViiV’s parent company) and colleagues evaluated the pharmacokinetics (PK) and tolerability of administering standard doses of cabotegravir and rilpivirine in the outer side of the thigh rather than the buttocks. This could allow for self-administration and offer an alternative injection site in cases where buttocks injections are unfeasible or intolerable.

The study included 15 healthy HIV-negative volunteers, six of whom were women; one withdrew early due to pregnancy. The median age was 33 years, and White and Black people were equally represented.

Overall, adverse events were common, most often injection site reactions such as pain, swelling, induration (hardness) or redness. Other side effects, such as chills, headache and insomnia, were uncommon, reported by three people, and there were no serious adverse events.

Everyone reported injection site pain, and about half reported induration or swelling. These were usually mild (79%) or moderate (15%) and lasted a median of 8 days. The researchers noted that the level of pain was higher soon after rilpivirine injections compared with cabotegravir injections.

In the second study, Dr Paul Benn of ViiV Healthcare and colleagues evaluated the safety, tolerability and pharmacokinetic of a high-concentration formulation of cabotegravir, again in healthy HIV-negative volunteers.

The cabotegravir formulation is 400mg/ml, meaning twice as much active drug per volume. It was developed to support less frequent dosing or potential self-administration via subcutaneous (under the skin) or thigh injections.

After an oral lead-in, four cohorts received two once-monthly jabs containing various doses (200-600mg) of the 400mg/ml formulation administered either as an intramuscular injection in the buttocks or lateral thigh or as a subcutaneous injection in the abdomen. A fifth cohort received a single larger dose (800mg) in the buttocks to explore the potential for administration once every three months, which would reduce clinic visits to four per year. In each cohort, some participants received the standard 200mg/ml formulation for comparison. 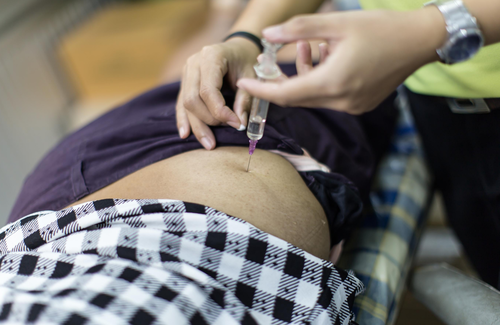 The 88 participants had a median age of approximately 34 years and about 40% were women. About half were White and a third were Black. Demographics varied somewhat across the cohorts. Fourteen people (16%) had a body mass index indicating obesity.

Overall, dose-normalised PK parameters for the 400mg/ml formulation were similar across all dose levels and administration routes. However, the half-life was 62% shorter and the concentration rate was 160% higher when compared with the standard 200mg/ml formulation. The researchers said the higher-concentration formulation was absorbed faster, resulting in a shorter half-life. Administration every 4 weeks resulted in plasma drug concentrations within the range seen with the standard formulation, but longer dose intervals were predicted to require a high dose volume the researchers deemed “impractical”.

Here too, most participants experienced injection site reactions such as pain, swelling, induration or redness, but these were usually mild and transient. Swelling, induration and nodules were more common after subcutaneous abdominal administration compared with intramuscular jabs. Twelve people had severe (grade 3) adverse events, and five people discontinued the study after the first injection for this reason. Other types of adverse events were uncommon. Overall, the researchers concluded, the safety profiles of the 400mg/ml and standard 200mg/ml formulations were similar.

Reported pain scores were highest on day 5 after an injection. Scores were “somewhat higher” for thigh or abdominal injections compared with buttocks injections, but the researchers cautioned that the numbers were small. Despite injection pain being common, most participants ranked it as only a little bothersome and most considered it acceptable.