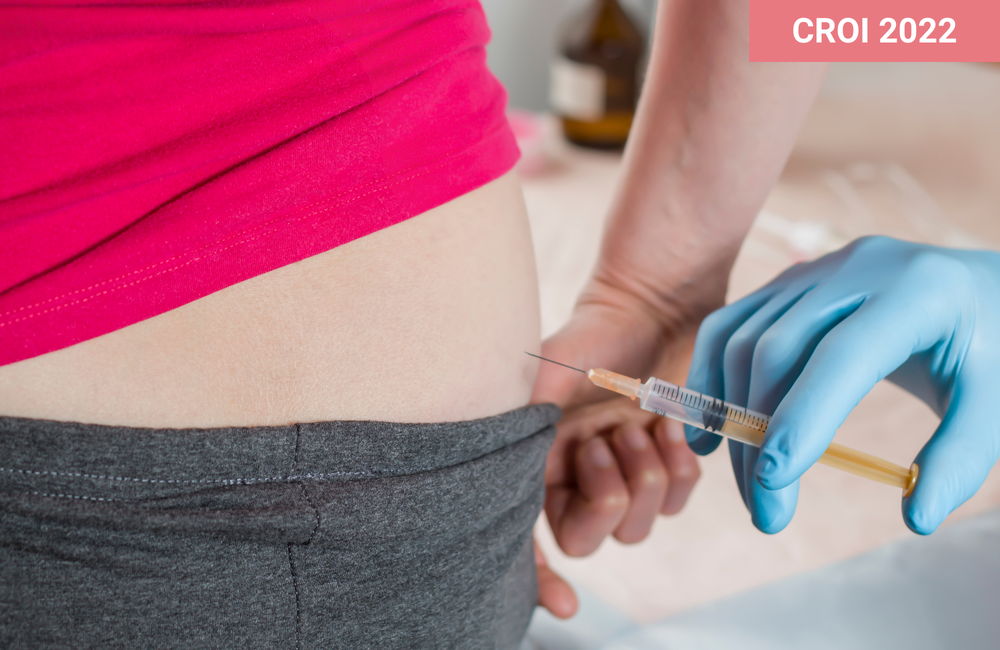 People who received injectable cabotegravir (Vocabria) plus rilpivirine (Rekambys) every other month were as likely to maintain viral suppression as those who got the jabs once-monthly, but those using the less frequent dosing schedule were more likely to experience virological failure, according to three-year follow-up data presented at the Conference on Retroviruses and Opportunistic Infections (CROI 2022).

Injectable cabotegravir plus rilpivirine is the first complete HIV treatment regimen that does not require daily pills. It involves two separate injections in the buttocks administered by a healthcare provider. The regimen is indicated as maintenance therapy for adults who have achieved viral suppression on daily oral antiretroviral therapy and who have no history of treatment failure and no known or suspected resistance to either cabotegravir or rilpivirine.

The European Medicines Agency approved injectable cabotegravir plus rilpivirine in December 2020, allowing for both once-monthly and every-other-month administration. However, ViiV Healthcare only markets the higher dosage used for the every-other month regimen in the UK and Europe, leaving doctors without the option of prescribing the once-monthly schedule. In the US, in contrast, the Food and Drug Administration initially approved only the once-monthly regimen (sold in the US as Cabenuva), adding the every-other-month schedule a year later, and both dosages are marketed.

The follow-up ATLAS-2M trial compared once-monthly and every-other-month dosing of the injectable regimen. This study included 654 participants with an undetectable viral load who switched from a daily oral regimen and 391 people who rolled over from the original ATLAS trial.

At CROI 2020, Dr Turner Overton of the University of Alabama at Birmingham presented 48-week results from ATLAS-2M, showing that 94% of participants in both treatment groups maintained viral suppression, indicating that the less frequent schedule was noninferior to monthly dosing. At CROI 2021, researchers reported 96-week results, showing that 90% of people in the once-monthly group and 91% in the every-other-month group maintained an undetectable viral load.

Over three years, a total of two people (less than 1%) in the once-monthly group and 11 (2%) in the every-other-month group met the criteria for confirmed virological failure, defined as two consecutive viral load measurements above 200 copies/ml.  Dr Laura Waters of the NHS Mortimer Market Centre in London calculated that the risk of virological failure was 1 in 200 in the once-monthly group versus 1 in 40 in the every-other-month group.

"The risk of virological failure was 1 in 200 in the once-monthly group versus 1 in 40 in the every-other-month group."

In both groups, most treatment failures occurred during the first 48 weeks. Two people in the every-other-month group, but none in the once-monthly group, had confirmed virological failure between week 96 and week 152. Overall, 60% of people with treatment failure had two or more risk factors, including pre-existing rilpivirine resistance mutations, HIV subtype A6/A1 or a body mass index of 30 or higher. Most had integrase and rilpivirine resistance mutations at the time of treatment failure, but 12 of the 13 were able to regain viral suppression after switching to an alternative regimen.

As seen at weeks 48 and 96, long-acting cabotegravir and rilpivirine continued to be safe and generally well tolerated. Only 2% of participants in both treatment groups experienced grade 3 or higher treatment-related adverse events. The most common side effect was injection site reactions, most often pain. However, this was usually mild to moderate and lasted a median of three days; only 1% in both groups reported severe reactions, and 2% to 3% withdrew from the study for injection-related reasons. The number of participants reporting injection site reactions at each visit decreased over the first year and remained consistent thereafter, Overton reported.

What’s more, participants reported greater satisfaction with cabotegravir and rilpivirine injections compared with daily oral treatment, and they preferred every-other-month to once-monthly dosing. Previous studies found that reasons for preferring the jabs included greater convenience, not having to think about HIV treatment every day, and not having pill bottles that could reveal one’s HIV status.

Nonetheless, while viral suppression rates were high in both groups, the greater frequency of treatment failure in the every-other-month arm could be cause for concern.

The risk of virological failure in the context of 100% adherence “is an essential part of counselling people with HIV about whether this regimen is suitable for them” and whether the risk is acceptable to them, Waters said in a Twitter thread commenting on the study results. She noted that people who develop resistance to cabotegravir and rilpivirine could be left with few remaining treatment options, and having a detectable viral load could have implications for HIV transmission. She advised viral load monitoring no less than every two months for people using the every-other-month regimen.

“As we are not allowed to use [monthly dosing] in Europe, I call on ViiV to give us, and most importantly, people with HIV, a CHOICE!”, Waters said.