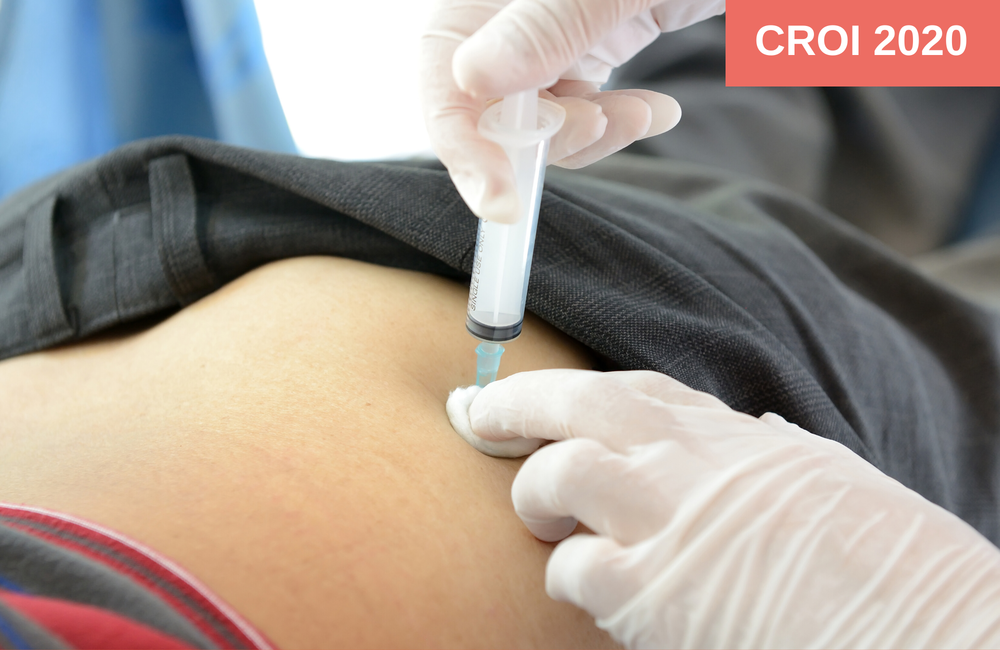 A combination of two long-acting injectable drugs administered every two months suppresses HIV viral load as well as monthly injections, according to a report at the Conference on Retroviruses and Opportunistic Infections (CROI 2020). Research is being presented virtually this week after the in-person meeting in Boston was cancelled due to the coronavirus crisis.

Treatment that can be taken every other month could be more convenient and might improve adherence. However, in this study, those who received the every-other-month regimen were more likely to develop drug resistance if they did not maintain viral suppression.

Dr Turner Overton of the University of Alabama at Birmingham presented results from the Phase III ATLAS-2M trial, which looked at the safety and efficacy of long-acting injections of cabotegravir and rilpivirine administered either every month or every other month for people with undetectable viral load at baseline. Cabotegravir is an experimental integrase inhibitor being developed by ViiV Healthcare. Rilpivirine is a non-nucleoside reverse transcriptase inhibitor (NNRTI) currently available in pill form (Edurant) produced by Janssen.

The Phase III ATLAS trial tested the injectable combination administered monthly for people with an undetectable viral load who switched from a standard oral antiretroviral regimen, while the FLAIR trial studied the same regimen for people starting HIV treatment for the first time.

As reported at last year's CROI, the long-acting regimen both maintained viral suppression in treatment-experienced people and brought the virus below the level of detection in those starting treatment.

ATLAS showed that drug levels were maintained in the body for more than a month, encouraging investigators to test the every-other-month regimen in the ATLAS-2M study.

ATLAS-2M included 391 participants from the original ATLAS study who received the monthly injectables. The other 654 participants – including some who had been in the ATLAS control arm – switched from a standard oral regimen containing a protease inhibitor, NNRTI or integrase inhibitor plus two nucleoside/nucleotide reverse transcriptase inhibitors. Those switching from a standard regimen started with a one-month lead-in period on oral cabotegravir plus rilpivirine.

Overall, about a quarter of participants were women, 73% were white and 18% were black. The median age was 42 years and 27% were over 50. The median CD4 count was high, at approximately 660 cells/mm3. Study sites were mostly in the United States and other high-income countries.

After the lead-in period, all participants were randomly assigned to receive injections of 600mg cabotegravir and 900mg rilpivirine every other month (522 people) or 400mg cabotegravir and 600mg rilpivirine every month (523 people). The drugs were administered as two separate intramuscular jabs given by healthcare providers at a clinic, with the buttocks being the preferred injection site.

"Long-acting cabotegravir plus rilpivirine given every other month could be an attractive treatment option, although the higher likelihood of drug resistance could be a concern."

As shown in the original ATLAS study, treatment was generally safe and well tolerated. Most side effects were mild or moderate. Less than 1% of participants in both the every-other-month and the monthly group experienced serious or severe (grade 3 or higher) drug-related adverse events. Five people in the every-other-month group and eight in the monthly group stopped treatment due to side effects.

Injection site reactions – mainly pain – were the most common side effects. These occurred somewhat more often in the every-other-month group (30% of injections) compared with the monthly group (20% of injections). But in both groups, less than 1% of these reactions were severe, and few people stopped treatment for this reason (1% and 2%, respectively).

Despite the injection reactions, almost all study participants said they preferred injections to daily oral treatment. Among those who switched from once-monthly administration in ATLAS to every-other-month in ATLAS-2M, 94% said they preferred less frequent dosing, 3% preferred monthly dosing and 2% preferred their prior oral therapy.

These findings indicate that long-acting cabotegravir plus rilpivirine given every other month could be an attractive treatment option, although the higher likelihood of drug resistance could be a concern.

"There is a need for more convenient, simplified treatments to help address challenges such as pill burden, pill fatigue, drug and food interactions, and stigma that detrimentally affect adherence for people living with HIV," Overton said in ViiV press release. "The results from this study demonstrate the potential for an alternative to traditional daily, oral regimens."

The US Food and Drug Administration recently delayed the expected approval of the once-monthly regimen of cabotegravir plus rilpivirine (brand name Cabenuva), citing concerns about chemistry and manufacturing. ViiV did not offer an update about when approval might happen.