The first full reports on the use of a COVID-19 vaccine in people with HIV have appeared. Both deal with the Oxford/AstraZeneca vaccine and show that it produced similar immune responses in people with or without HIV. People with HIV did not experience more side effects from the vaccine.

Vaccination in people living with HIV is worth investigating because people with HIV sometimes have weaker or less durable responses to various vaccines, including the annual flu vaccine and some hepatitis B vaccines. The strength of the immune system – reflected in CD4 counts – might affect response to vaccination. It’s worth noting that both of these studies enrolled people with strong CD4 counts (over 500) who were doing well on treatment, so the results may not be generalisable to people with lower CD4 counts.

One study compared 54 people living with HIV in the UK with 50 HIV-negative people who were taking part in a larger vaccine study. Close analysis of blood samples taken five times in the two months after the first dose showed no differences between the HIV-positive and HIV-negative participants. Samples were tested for the number of antibodies produced, how well the antibodies reduced virus-infected cells, the quantity of virus-specific T-cells, and so on.

There was no difference in the common vaccine side effects of sore injection site, headache, chills, tiredness or muscle and joint pains.

The second study was carried out in South Africa and involved 104 people with HIV and 70 people without HIV. Again, the Oxford/AstraZeneca vaccine produced strong immune responses and side effects were similar between the two groups.

Meanwhile, other researchers have looked into immune response in people with HIV after infection with COVID-19 (rather than after vaccination). They found that people with HIV had lower antibody concentrations than HIV-negative people and also that their antibodies were less able to stop the virus binding to its human target receptor. 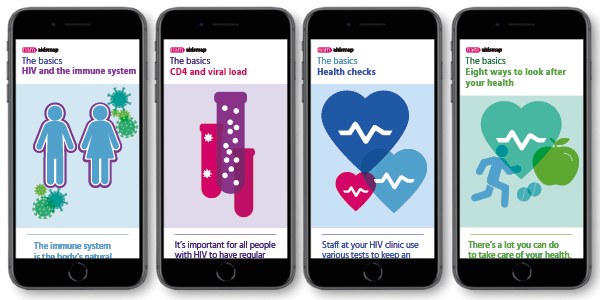 We are updating our easy-to-read, illustrated information pages from our series The basics. Six of the newly designed and updated pages are available so far on aidsmap.com and more will be published this year.

A recent online conference of HIV clinicians in the UK provided an opportunity for them to share their experiences of delivering care during lockdowns and to talk about which of the innovations might be retained.

National data showed that there were 6% fewer patients seen in January to September 2020 than in the same months the previous year. There were 9% fewer consultations (including phone consultations).

Many people have remained in contact with their clinic by phone and email, receiving deliveries of medication, but skipping the usual blood tests. Clinics generally report that this hasn’t created problems in people who were doing well on their treatment beforehand.

Several clinics had surveyed their patients to ask whether they would prefer appointment face to face, over the phone or on video (something that very few clinics are offering). One possibility for after the pandemic is a hybrid model, such as face-to-face reviews once a year and virtual appointments every six months. Four in five patients at the Bloomsbury Clinic in central London said this would be acceptable. Many patients said that the most important thing was whether they would generally see the same clinician at each consultation. 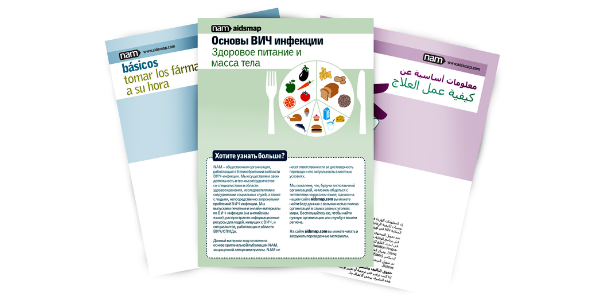 We want as many people as possible to have access to accurate, useful information about HIV in the language most useful to them.

In the Languages section of aidsmap.com, you'll find translations of our pages in 24 languages, including leaflets from The basics series, factsheets, booklets and conference bulletins.

The first showed that the type of heart attack differs in people living with HIV. In the general population, the most common are Type 1 heart attacks, which are caused by arterial disease, especially the build up of cholesterol-related deposits or plaques in the arteries. However, the researchers found that in people living with HIV in the US, around half of heart attacks were Type 2. Its possible causes include sepsis (a severe reaction to an infection), use of cocaine and other stimulant drugs, and respiratory failure. This latter type was seen in people with HIV of all age groups, but especially those under the age of 40.

The second looked at medication used to lower high blood pressure, also in the US. One in eight participants were prescribed drugs known as beta-blockers – although they are not recommended for first-line therapy – and this was found to increase the risk of problems by up to 90% when compared to another group of medications, known as ACE inhibitors and ARBs.

Our days are numbered | POZ

Bob Leahy: "As I face open-heart surgery, I wonder how my elders in the HIV movement are best served, whether the elderly even need HIV services and what they might look like."

UK to slash funding for the global HIV response, including cutting UNAIDS’ funding by more than 80% | STOPAIDS

The UK, which had funded UNAIDS, the Joint United Nations Programme on HIV & AIDS, £15 million a year for the past five years, has just announced it plans to provide only £2.5 million this year – a more than 80% cut.

Diagnosed with HIV at 30, I am delighted to still be alive | Metro

Tony Whitehead: "When I tested HIV positive in 1985, I thought I was going to die – and my family did too. That’s what people thought back then."

Kenyans living with HIV say their lives are in danger due to a shortage of antiretroviral drugs donated by the United States amid a dispute between the US aid agency and the Kenyan government.

PrEP for women in Europe webinar