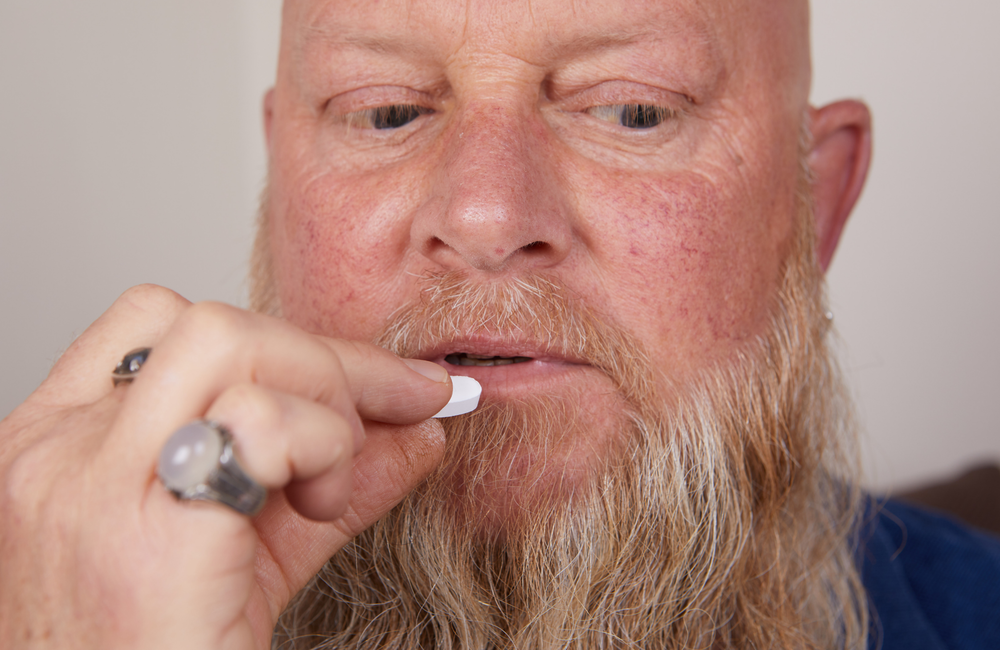 One of the possible consequences of not taking your HIV treatment properly is that your HIV will develop resistance to anti-HIV drugs. Resistance is an important reason why HIV medication can stop working.

HIV reproduces itself very quickly, making billions of new viruses every day. Because the virus often makes mistakes when copying itself, each new generation differs slightly from the one before. These tiny differences are called mutations.

Some mutations occur in the parts of HIV which are targeted by anti-HIV medications. This can result in strains of HIV developing that are less easily controlled by the drugs. These HIV strains are called drug-resistant.

The latest news and research on resistance

Drug-resistant HIV strains vary – some may be highly resistant to anti-HIV medications, while others may be less so. When an anti-HIV drug is started, HIV that is fully susceptible to that drug disappears rapidly and drug-resistant viruses remain. If the HIV replication is not fully suppressed, these resistant viruses can continue to reproduce themselves despite the drug's presence. The diagram below shows how this works.

Resistance is an important reason why HIV treatment can fail. Viral load, which should drop when you start a new drug combination, will increase again if drug-resistant HIV is able to emerge. However, newer anti-HIV medications provide treatment options for people who have developed resistance to other drugs and resistance does not need to be a reason for someone to become seriously ill because of HIV.

This diagram explains how resistance to anti-HIV drugs can develop. The line represents viral load level. Before starting treatment the viral load is high and is made up of both drug-sensitive and drug-resistant HIV. 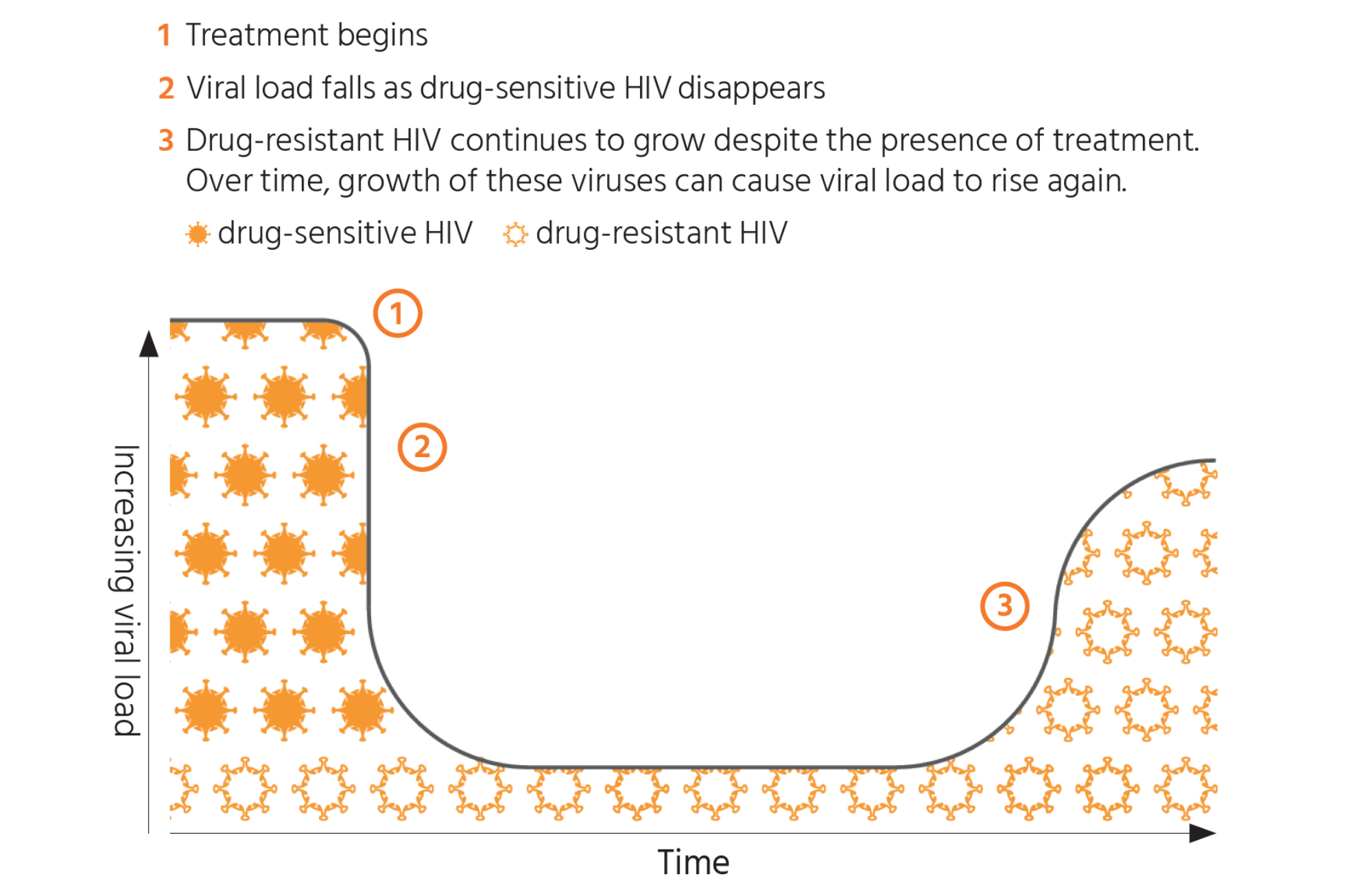 How to reduce the risk of resistance 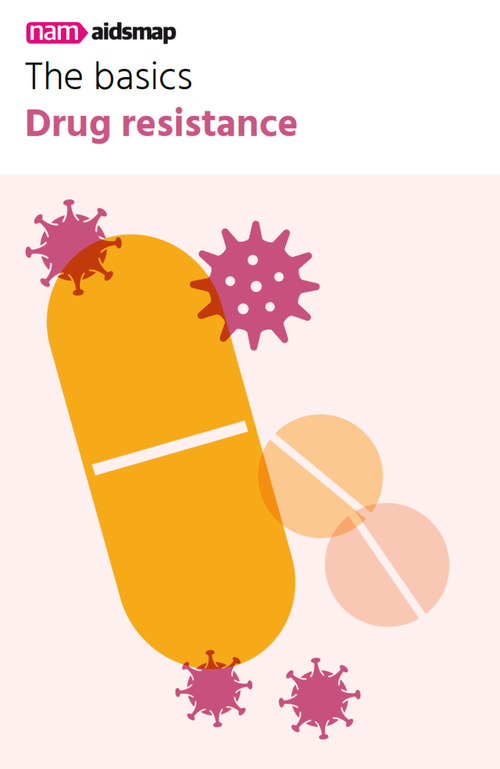 Once resistance to one anti-HIV drug has developed, this may mean that your HIV is also resistant to other, similar anti-HIV drugs (that is, drugs from the same ‘class’) you haven’t yet taken. This is called cross-resistance.

However, cross-resistance isn’t inevitable if you develop resistance to one drug. The use of resistance tests will help you and your HIV doctor select the anti-HIV drugs that are likely to be most effective against your virus if resistance does develop. The risk of cross-resistance is lower if your treatment combination is changed promptly and also for many newer anti-HIV medications. For these reasons, an undetectable viral load is a realistic aim for most people.

Blood tests are available which detect whether the HIV in your body is resistant to any anti-HIV drugs.

It's recommended that you have a drug resistance test before you start HIV treatment. This will usually happen when you are first diagnosed with HIV, in case you have a strain of the virus which is already resistant to one or more drugs. Again, you should have a resistance test if you are changing treatment because your viral load is detectable.

Resistance tests are also recommended to help guide the choice of treatment in women who are pregnant, and in children.

Results should be interpreted by someone who is experienced in their use. Test results should be considered alongside your full treatment history, rather than in isolation. This is because drug resistance is not the only reason why HIV treatment can fail – missed doses, poor absorption and drug interactions are other possible causes to consider.

Resistance tests can only be done if your viral load is detectable. They will be more accurate if done while you are still taking a failing combination rather than after you've stopped it. Once you stop taking a drug, the sensitive viruses start to grow rapidly as they are usually more ’fit’ than the resistant viruses. The test may give a misleading answer as it may not be possible to detect the smaller number of resistant viruses.

Some people contract HIV that is already resistant to one or more anti-HIV drugs (this has been the case for around 7% of people in the UK). This can happen regardless of how HIV is passed on.

While contracting a drug-resistant strain of HIV can sometimes limit your treatment options, in many cases these strains are resistant to a drug (or drugs) that is no longer widely used. So resistance will not necessarily cause much trouble.

If you have a detectable viral load and drug-resistant virus, then there’s a risk that you could pass on a drug-resistant strain of HIV to someone else. Condoms, used carefully and consistently, are a very good way of preventing sexual transmission of HIV.

If you would like to discuss protecting your own or a partner’s sexual health, a health adviser at your HIV treatment centre or another member of your healthcare team can help.

Next review date
This page was last reviewed in July 2019. It is due for review in July 2022.
Related topics
Resistance
HIV treatment
Facebook
Twitter
LinkedIn
Print
Subscribe to emails & news feeds