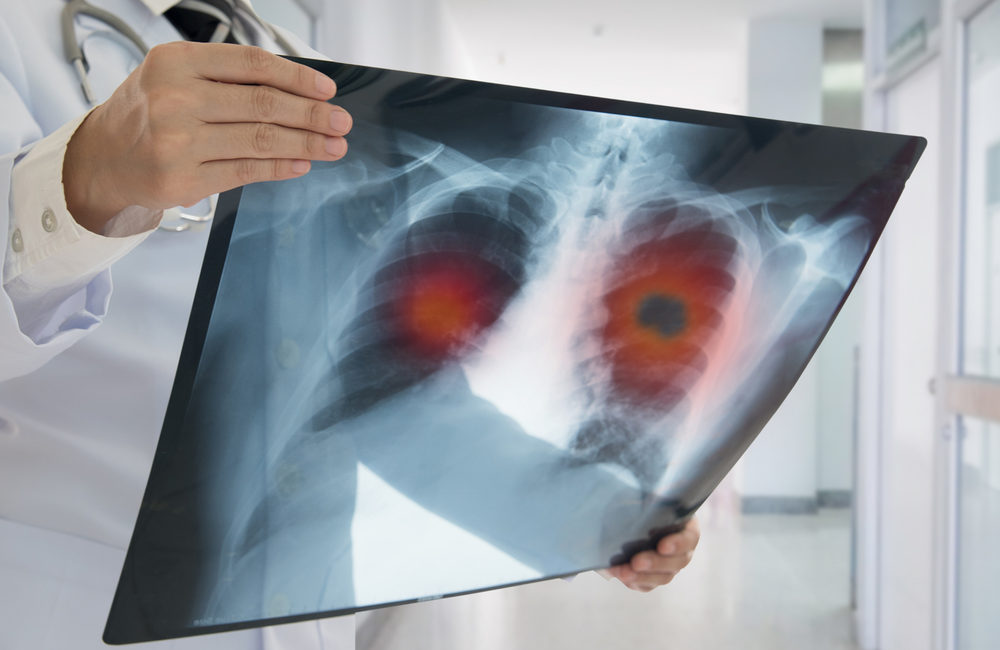 Cancer occurs when cells start to grow out of control. Cells that divide without stopping can spread into surrounding tissue and to other parts of the body. For example, cancer cells in the lung can travel to the liver or bones. This is known as metastasis.

Lung cancer is one of the most common cancers and a leading cause of cancer death in the UK and worldwide. Studies show that lung cancer occurs more often among people living with HIV compared with the general population. Smoking is the biggest risk factor, but people who never smoked can still get lung cancer.

Lung cancer often does not cause symptoms at early stages and it is frequently diagnosed late. New types of treatment are being developed, but it remains difficult to treat.

Your lifestyle and lung cancer

Some lifestyle changes can reduce your risk of developing lung cancer.

Don’t smoke. Smoking is the leading cause of lung cancer and it also raises the risk of mouth, throat, bowel and other types of cancer. Stopping smoking lowers the chances of developing cancer. Experts estimate that ten years after quitting, the risk of lung cancer is cut in half.

People who currently smoke tobacco (cigarettes, roll-ups, cigars or pipes) and former smokers are most likely to develop lung cancer. This is especially true for heavy smokers, but even light or occasional smoking – and exposure to second-hand smoke – raises the risk. People who never smoked can also get lung cancer.

Lung cancer mainly affects older people, especially those aged 65 or over. Men are more likely to get lung cancer than women, but the gap is shrinking. Lung cancer appears to be rising among women who never smoked, and experts don't know why.

Lung cancer in people with HIV

As people with HIV live longer thanks to effective antiretroviral treatment, they are more prone to develop diseases of older age. Lung cancer is one of the most common non-AIDS cancers and the principal cause of cancer death among people living with HIV.

A single change in gene sequence. Some HIV mutations cause the virus to become resistant to certain antiretroviral (ARV) drugs.

People living with HIV have a higher risk of developing lung cancer and several other cancers compared with the general population. HIV-positive people also appear to get cancer at younger ages. The reason for this is unclear. People with HIV are more likely to smoke than the general population, but the risk is elevated even for non-smokers.

Weaker immune function, increased inflammation and chronic lung problems may contribute to higher cancer risk. T cells play an important role in locating and destroying cancer cells. Nonetheless, even people who keep their HIV under control with medication are at greater risk for some cancers than HIV-negative people.

HIV treatment itself does not cause lung cancer.

Early-stage lung cancer often does not cause symptoms, making it difficult to detect. As the disease progresses, symptoms could include:

Other less serious conditions can cause similar symptoms. It's a good idea to see your doctor if they persist or worsen.

Studies show that screening with low-dose CT (computerised tomography) scans for people age 55 and older who are current or former heavy smokers reduces lung cancer deaths. However, routine screening of people at risk for lung cancer remains uncommon and there is no national screening programme in the UK. Some evidence suggests people with HIV who are current or former heavy smokers may benefit from screening at a younger age.

If a person has symptoms, a chest X-ray, CT scan or MRI (magnetic resonance imaging) scan may be done to look for abnormal areas in the lungs. If a suspected mass or tumour is found, your doctor may do a biopsy, taking a small piece of tissue to examine under a microscope. Another type of test looks for abnormal cells in sputum, or mucous coughed up from the lungs.

The two main types of lung cancer are small cell and non-small-cell, the latter of which is by far the most common (about 85% of cases). Non-small-cell lung cancer is further divided into adenocarcinoma, squamous cell cancer and large cell carcinoma. Tumours may be tested for genetic mutations (including ALK, EGFR, KRAS and others) to help guide decisions about treatment.

Studies suggest that the types of lung cancer, stage at diagnosis and presence of genetic mutations are similar in HIV-positive and HIV-negative people.

Treatment for lung cancer has improved in recent years, but it remains one of the most difficult to treat cancers. The type of treatment you may receive depends on how advanced the cancer is at diagnosis, how many tumours there are and whether it has spread to nearby lymph nodes or other parts of the body. Most people receive a combination of treatments, for example surgery and chemotherapy.

Surgery: If lung cancer is caught early, it may be possible to remove all or most of it with surgery. This is usually not possible if the cancer has spread.

"BHIVA recommends that all people with HIV who need cancer treatment should start HIV treatment, if they have not done so already."

Radiotherapy: Radiation may be used to destroy cancer cells. Usually it is given with a large machine that aims beams of radiation at the affected part of the lung. Radiation can sometimes shrink tumours that cannot be removed, which can help relieve pain and other symptoms.

Targeted therapy: Targeted or precision medications are designed to attack cancer with specific characteristics, for example certain gene mutations. Many targeted therapies interfere with signalling pathways that regulate cell growth. Over time, cancer cells can sometimes develop resistance to them. Some lung cancers have mutations (such as EGFR or ALK) that have effective targeted therapies, but drugs have not yet been discovered for other common mutations. Targeted therapies may be small molecules taken as pills or monoclonal antibodies given through an intravenous (IV) drip.

Immunotherapy: Immune-based medications help the immune system identify and attack cancer cells. Some tumours can turn off immune responses against them, and drugs known as checkpoint inhibitors release the brakes and restore T cell activity. Some checkpoint inhibitors, alone or in combination with chemotherapy, have shown good results in people with lung cancer. But they don't work for everyone and it is difficult to predict who will benefit.

Like any other treatment, cancer medications can have side-effects. Traditional chemotherapy destroys fast-growing healthy cells, such as those in the hair follicles, bone marrow and gut. Targeted medications are more specific than chemotherapy, but can still cause side-effects. Immunotherapy can sometimes trigger excessive immune responses against healthy tissue. It’s important to ask about the potential side-effects of the treatment you're considering. You may be given additional medications to manage side-effects, for example anti-nausea drugs or medications that boost blood cell counts.

The British HIV Association (BHIVA) recommends that HIV-positive people with cancer should be treated at hospitals with experience of treating cancer in people living with HIV. BHIVA also recommends that all people with HIV who need cancer treatment should start HIV treatment, if they have not done so already.

People with HIV can generally use the same types of treatment for cancer. However, people with low CD4 counts or other co-morbidities may have poorer treatment outcomes or more side-effects. It may be necessary to adjust cancer or HIV treatment, taking into account the impact of each disease on the other and the potential for drug-drug interactions. For this reason, it's important that the doctors treating your HIV and your cancer work together.

Radiotherapy, chemotherapy and some targeted therapies can harm the bone marrow, where blood cells are produced, leading to immune suppression. This could result in a significant drop in your CD4 count (along with other blood cells) and you may need medications to prevent opportunistic infections (known as prophylaxis). Your CD4 count may be checked more often during and after cancer treatment.

Most clinical trials of newer targeted therapies and immunotherapies have not enrolled HIV-positive people, so doctors have less experience using these medications in people with HIV. BHIVA recommends that people with non-small-cell lung cancer should be tested for genetic mutations and treated with appropriate targeted therapy. Unless there's a reason to suspect they will have harmful effects, people living with HIV should not be denied these effective new treatments.

Cancer treatment is best managed by a multi-disciplinary team that may include oncologists (cancer specialists) and radiologists (doctors who interpret scans or provide radiotherapy). You may be supported by cancer nurse specialists, therapists, dietitians, your GP and others during your treatment. If a cure is not possible, palliative care can relieve pain and other symptoms and help you maintain the best possible quality of life.