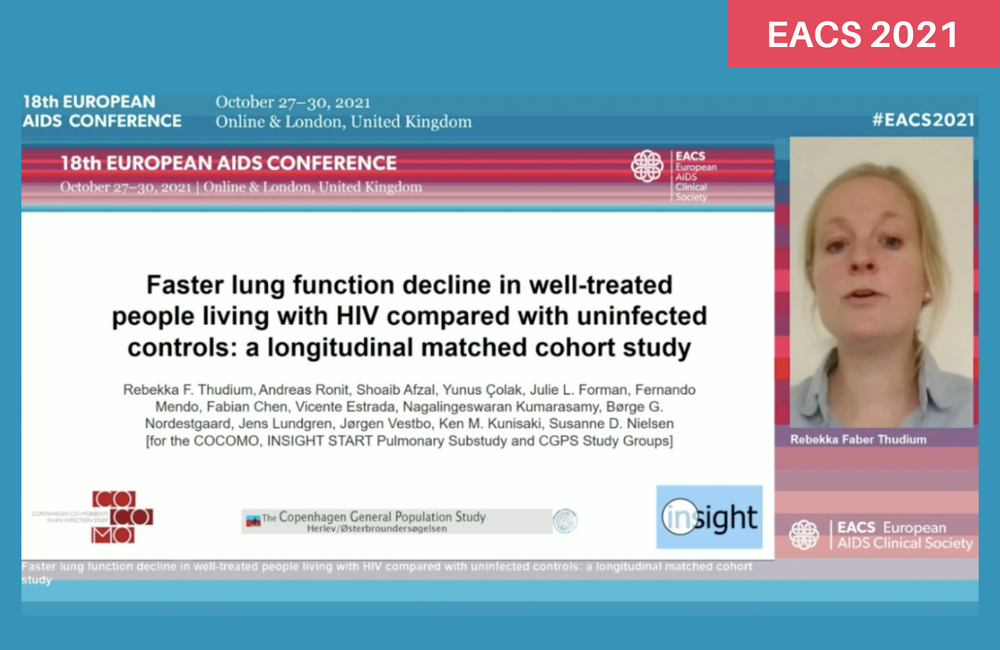 A study at the 18th European AIDS Conference (EACS 2021) showed that people living with HIV who receive effective antiretroviral therapy have a faster rate of lung function decline than HIV-negative people.

Dr Rebekka Thudium from the University of Copenhagen also told the conference that the association between HIV and lung function decline is modified by smoking, which therefore, may be more harmful in people with HIV than those without. However, lung function also declines faster in people living with HIV who never smoked, suggesting that mechanisms independent of smoking may also play a role.

The investigators included patients from two major observational cohort studies: 705 from the COCOMO (Copenhagen Comorbidity in HIV infection) study, and 425 from the INSIGHT START pulmonary sub-study. The comparator arm included 2895 participants from the Copenhagen General Population Study (CGPS), which is another cohort study with 100,000 HIV-seronegative people who live in the same geographical region. The two groups were matched on age in 5-year age strata and on sex.

To participate in the study, both people with HIV and controls had to be at least 25 years old and have had two valid spirometry tests (measuring airflow into and out of the lungs with a spirometer), separated by at least two years of follow-up. Having been on antiretroviral therapy for at least six months was an additional inclusion criterion for people with HIV.

Measured by spirometry, the study primary outcome was the annual rate of decline in Forced Expiratory Volume1, or FEV1 (ml/year), which is the maximal amount of air a person can forcefully exhale in one second.

The secondary outcomes were the rapid lung function decline, defined as an FEV1 decline of over 40ml/year, and the annual rate of the Forced Vital Capacity, or FVC, decline (ml/year). The FVC is the total amount of air a person can blow out in one complete breath, after breathing in deeply.

At baseline, lung function was lower in people with HIV than in controls.

The annual rate of lung function (FEV1) decline was faster in people with HIV than in controls, with a difference of 8.5ml/year. Differences were found between people with HIV and controls, in current, former and never smokers. However, the largest difference was observed in current smokers living with HIV, showing that they have an extra 16.8ml annual rate of lung function decline when compared with HIV-negative smokers. “The association between HIV and lung function decline is amplified by the presence of active smoking,” Thudium said.

Turning to the lung function rapid decline, quite significant differences were also found in the same subgroups, between HIV-positive and HIV-negative participants. The table shows the proportion with a decline over 40ml/year.

Likewise, the decline in Forced Vital Capacity was greater by some 18ml/year in people with HIV (35.2 in HIV-positive people versus 17.5 in controls).