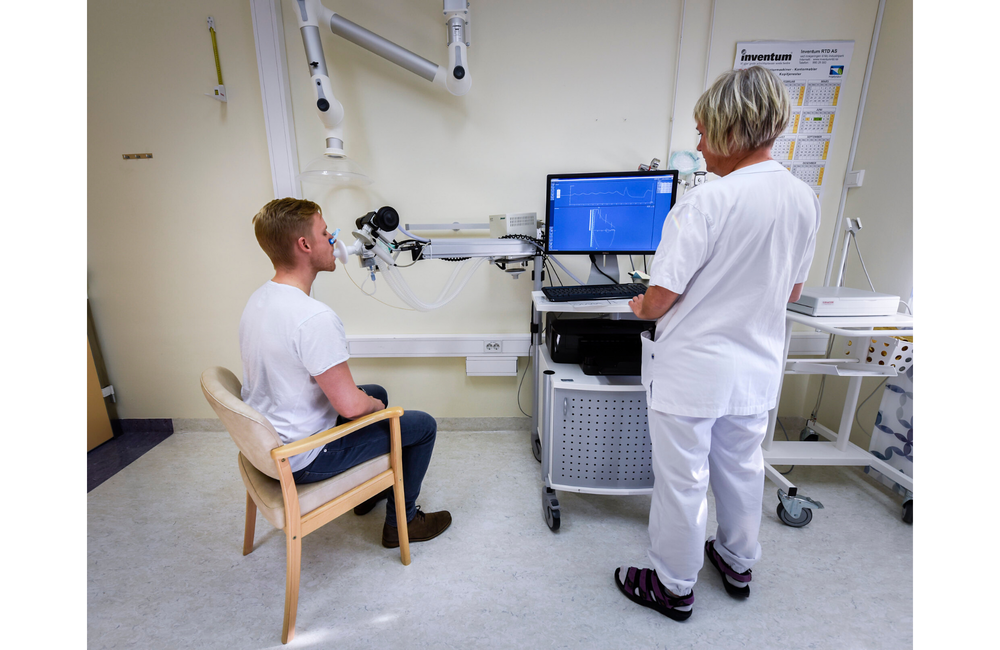 According to a US study in the 1 July issue of AIDS, HIV-positive men are at a higher risk of abnormal pulmonary gas exchange than HIV-negative men. These data reinforce the evidence that people living with HIV are more exposed to lung function impairment than HIV-negative individuals.

The study was conducted in 2017-18 within MACS (Multicenter AIDS Cohort Study), an ongoing US cohort study of men who have sex with men, living with or without HIV, which began enrolling in the mid-1980s.

Its main objective was to compare lung function among HIV-positive and HIV-negative participants, with the use of spirometry and single-breath diffusing capacity for carbon monoxide, commonly termed DLCO in medical practice.

Spirometry and DLCO are easy to perform and measure different aspects of lung function.

Spirometry measures airflow into and out of your lungs with a spirometer, a device inserted in your mouth. It helps detect pulmonary obstruction, caused by conditions such as chronic obstructive pulmonary disease (commonly termed COPD) or asthma. The most common measurements are:

DLCO is a calculated value that determines the ability of the lungs to transfer oxygen to blood through the air sacs of your lungs, called alveoli. You are asked to inhale, then exhale, a small quantity of carbon monoxide (CO), used because of its better affinity than oxygen for the red cells circulating in the blood vessels behind the alveoli.

Test results are compared with the individual’s predicted normal value, based on a calculation that includes their gender, height, weight and race. For example, when DLCO is below 75% of the predicted value, it indicates a problem that may impair exercise and affect long-term survival from lung diseases and disorders.

DLCO is less often used than spirometry, although it may be a more sensitive test for identifying lung abnormalities. It is sometimes referred to as a lung diffusion or gas transfer test.

HIV has been identified as a risk factor for emphysema (damaged alveoli), expiratory airflow limitations, gas exchange abnormalities and respiratory symptoms. This brought Dr Ken Kunisaki and colleagues to test the hypothesis that HIV-positive men would have worse measures of lung airflow than their HIV-negative counterparts.

Of note, so far, studies had small numbers of participants, not measured DLCO and not always compared HIV-positive to HIV-negative individuals.

A total of 1176 out of 1305 (90%) of MACS participants were recruited in the study, and 1067 spirometry and 1042 DLCO test results were available for analysis. Participants also reported breathlessness and other “symptoms of quality of life” in two different questionnaires.

As ageing can affect lung function, it should be noted that in the MACS cohort, most participants were aged between 49 and 65 years (median age 57). Likewise, many participants smoked or had smoked:

At the time of pulmonary testing, 90% of HIV-positive participants were taking antiretroviral therapy and 88.8% had an undetectable viral load. Current CD4 cell counts were high, with an average of 674 cells/mm3, while the CD4 cell nadir ranged from 235 to 525/mm3. Also, among HIV-positive participants, the prevalence of a history of AIDS (7.6%), Pneumocystis pneumonia (2.9%), hepatitis B (3.1%) and hepatitis C (7.3%) was low.

The researchers highlight that “compared with HIV-negative study participants, the HIV-positive participants were younger, more commonly of African ancestry, more likely to report current smoking and illicit drug use, more commonly infected with hepatitis B or C, and less commonly enrolled in the initial 1984-1985 wave of enrolment.” Some of the researchers’ analyses were adjusted for these potential confounders.

In the overall cohort, median FEV1 and DLCO were 97% and 85% of predicted normal values, respectively. In the unadjusted analysis, FEV1 was similar in both populations, but after adjustment for potential confounders, it appeared worse in HIV-positive individuals (2.2% worse score).

The study investigators say that their main finding is that HIV status is more closely associated with impairments in measures of gas exchange (DLCO) than measures of airflow obstruction (FEV1 or spirometry).

FEV1 and airflow obstruction tended to be worse among HIV-positive participants than among their HIV-negative counterparts, although the differences were not statistically significant. This is a surprising finding, as the literature has so far reported that odds for COPD – whose diagnosis is partly based on FEV1 – among HIV-positive individuals are significantly higher.

Still, in line with previous scientific papers, COPD prevalence was 9.7% among HIV-positive participants, which is not a low rate. The researchers comment: “Given the impact of COPD on mortality, quality of life and work productivity, the presence of COPD in nearly 10% of HIV-positive persons should prompt further research into HIV-specific case-finding, treatment and prevention strategies”.

Other findings and associations

Some of the study’s other findings deserve our attention.

Concerning patient reported outcomes, no statistically significant differences between the two groups were found. However, HIV-positive participants reported worse symptom scores, even if it is unclear what they mean clinically.

The data suggested that more years of antiretroviral therapy exposure might be associated with worse DLCO values and higher odds of DLCO impairment, but showed no association with FEV1. Cautiously, the investigators evoke a potential harmful role of antiretrovirals on lungs or an impact of the immune reconstitution on gas exchange.

"HIV status is more closely associated with impairments in measures of gas exchange (DLCO) than measures of airflow obstruction (FEV1 or spirometry)."

A higher nadir CD4 cell count was associated with a higher DLCO predicted value and a lower risk of DLCO impairment, confirming a relationship between CD4 cell count nadir and DLCO that has been reported before. Mechanisms for this relationship are currently unclear, but may result from alterations in the microbiome (‘good’ and ‘bad’ bacteria and other microbes) in the airway or co-infections with other chronic viruses like cytomegalovirus or herpes viruses.

One result  is flagged as “unexpected” by the paper’s authors and has seemingly never been reported before. Among HIV-positive participants, a higher CD4 cell count was associated with a lower FEV1 and with higher odds of FEV1 impairment, but with lower odds of DLCO impairment (the higher the CD4 count, the better the DLCO).

Trying to answer the obvious question brought here, the paper states that, although unclear, the reasons for the discrepancy between current CD4 counts and measures such as FEV1, versus gas exchange, could reflect complex relationships between immune function and different types of COPD, for which either of the two tests will be more sensitive.

Nearly as unclear is the reason why, “compared with HIV-seronegative men, HIV-positive men are at increased risk of abnormal pulmonary gas exchange, as measured by DLCO.”  Several hypotheses to explain this phenomenon emerge, that would warrant future thorough explorations.

To counter extra demand—and quash accusations of profiteering—Abbvie has reportedly taken a drastic step to open its COVID-19 candidate to competition.   AbbVie will not enforce global patent rights on all formulations of HIV med Kaletra (Aluvia) as the drug is being evaluated to treat severe COVID-19 in several clinical trials, the Financial Times reported.
FiercePharma
24 Mar 20
Harm reduction

In the two weeks since the first coronavirus cases were confirmed in New York City, the harm reduction landscape here has been rewritten.
Filter
24 Mar 20
Harm reduction

Harm reduction ‘service as usual’ during the COVID-19 outbreak?

In response to the global outbreak of the COVID-19 virus, UK governments are imploring citizens to ‘stay at home’ and ‘avoid all non-essential contact’. However, if the spirit of the advice is for us all to reduce opportunities to contract and transmit the virus, what happens to services that typically require people to leave their house on a regular (sometimes daily) basis? |
Drug & Alcohol Findings
24 Mar 20
Human rights

To help guide governments, communities and other stakeholders in planning and implementing measures to contain the pandemic, UNAIDS has produced a new guidance document that draws on key lessons from the response to the HIV epidemic: Rights in the time of COVID-19: lessons from HIV for an effective, community-led response.
UNAIDS
23 Mar 20
Coronavirus

All New Yorkers should stay home and minimize contact with others to reduce the spread of COVID-19. But can you have sex?
NYC Health
23 Mar 20
More editors' picks