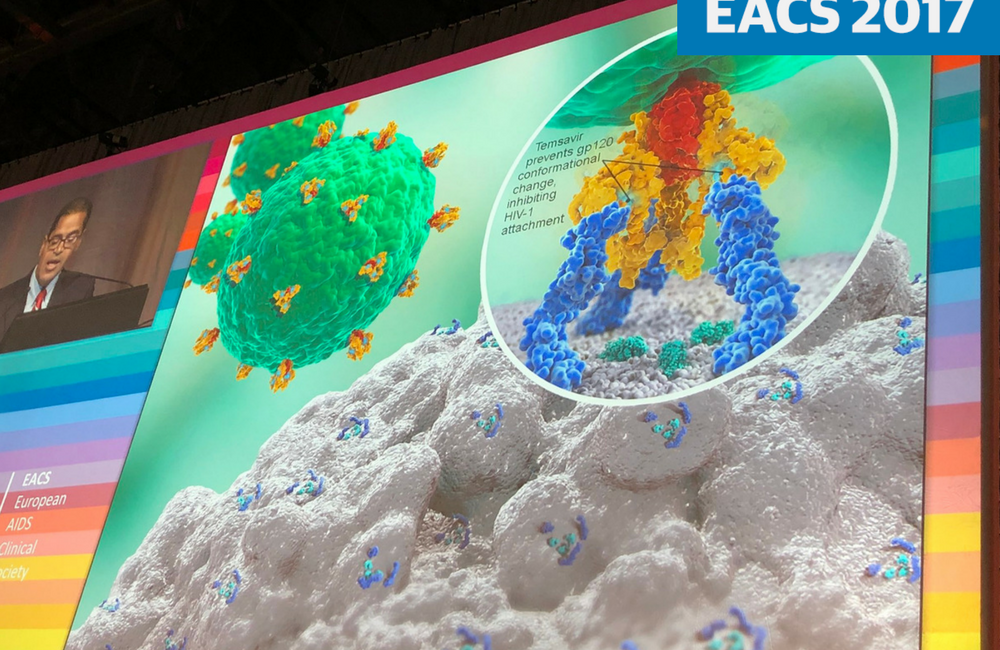 Fostemsavir, a new experimental attachment inhibitor, suppressed viral load in over half of participants with extensive drug resistance when added to a background regimen selected by resistance testing, Max Lataillade of ViiV Healthcare reported at the 16th European AIDS Conference (EACS 2017) in Milan on Friday.

The findings come from the phase 3 BRIGHTE study carried out in the United States, France and Brazil.

Fostemsavir (formerly BMS-663068) is a new experimental HIV attachment inhibitor which binds to the HIV gp120 protein, preventing HIV attachment to CD4 cells. Other inhibitors of HIV entry, enfuvirtide and maraviroc, have limited roles in HIV treatment. Enfuvirtide is an HIV fusion inhibitor, an injectable agent that is prescribed only for people with no other treatment options. Maraviroc is a CCR5 antagonist; it prevents HIV from using the CCR5 receptor on the surface of CD4 cells to gain entry to the cell. It is used in treatment-experienced people.

Fostemsavir is being developed by ViiV Healthcare as an agent for use in treatment-experienced people with resistance to several classes of antiretroviral drug. The drug was acquired from Bristol-Myers Squibb along with several other experimental antiretroviral drugs in 2016.

Clinical trials of fostemsavir have tested the drug in people with HIV who have two or fewer active classes of antiretroviral drug available to them.

A phase 3 study of fostemsavir, designed to lead to the licensing of the drug for use in treatment-experienced people, randomised participants to receive fostemsavir 600mg twice daily or placebo for 7 days in addition to their failing regimen, after which all participants received fostemsavir for 24 weeks together with a background regimen that had been optimised by resistance testing. Treatment-experienced people were eligible for the randomised study arm if they were unable to assemble a regimen that was likely to be fully suppressive from currently available agents and only had sensitivity to drugs in one or two classes of antiretrovirals.

The study also included an open-label arm for participants without any fully active drug options in the existing classes of antiretroviral agents, who started treatment with fostemsavir and a background regimen optimised by resistance testing.

A total of 272 people were randomised in the ratio 3:1 to the placebo-controlled arm of the study; 99 people were recruited to the open-label arm.

Among those with a baseline viral load > 1000 copies/ml (90% of all participants) the median decrease in viral load was 1 log10.

Serious adverse events occurred in 30% of participants (including the non-randomised arm) and led to discontinuation of study drug in 6% of all participants. These included AIDS-related infections and other events reflecting the advanced HIV disease of study participants. The most common grade 2-4 drug-related adverse events were nausea, diarrhoea, headache, vomiting, fatigue and weakness (asthenia).

Fostemsavir has been designated a Breakthrough Therapy by the US Food and Drug Administration (FDA) for answering an unmet clinical review and will receive rapid review when submitted for licensing. The FDA is expected to review a licensing application in the 2019 or 2020.

As Gilead works with Merck to combine their long-acting HIV drugs, the antiviral giant is hustling its prospect as a single therapy to the FDA. The treatment, lenacapavir, could become a new hope for patients whose infection has evaded current treatments and who have few other options.
FierceBiotech
1 Jul 21
New & experimental HIV treatments

If Approved,Lenacapavir Would be the First Capsid Inhibitor and the Only HIV-1 Treatment Option Administered Every 6 Months.
Gilead press release
29 Jun 21
New & experimental HIV treatments

Fostemsavir addresses a critical need in HIV care for those with little to no treatment options left who are at risk of further disease progression, or complications from HIV.
ViiV Healthcare press release
8 Feb 21
New & experimental HIV treatments