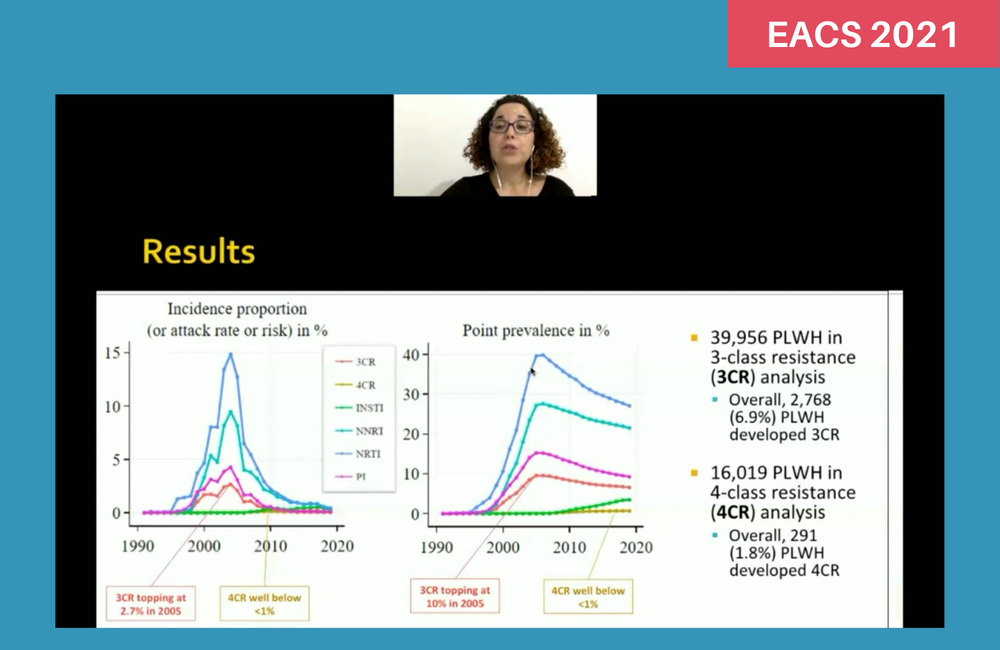 Resistance to all four main classes of antiretrovirals is becoming rarer among people with HIV in western Europe, a seven-country study presented at the 18th European AIDS Conference (EACS 2021) shows.

Although newer drugs are more potent, they need to be used in combination with other agents that are active against HIV.

Dr Barbara Rossetti of the University of Sienna in Italy presented results of a study into multi-drug resistant HIV by the EuResist network, which studies HIV drug resistance in Europe.

Previous research by the EuResist network, which looked at 2463 people with at least one genotype test result available between 2008 and 2019, found that high-level resistance to at least one drug in each of the four main antiretroviral classes declined from 5.6% in 2008 to 2.4% in 2018, so that only 2.5% of the sample had four-class resistance by 2019.

However, that analysis only looked at people who underwent resistance testing, for example, people starting treatment or people with viral rebound on treatment. It doesn’t tell us the prevalence of four-class resistance among the wider population of people with HIV taking treatment in Europe.

To investigate this question, the EuResist researchers looked at the incidence and prevalence of three-class resistance between 1996 and 2019, and four-class resistance between 2008 and 2019 (when integrase inhibitors were available), in a large cohort of people with HIV on antiretroviral treatment in Belgium, Germany, Italy, Luxembourg, Portugal, Spain and Sweden.

They also assumed that resistance to an integrase inhibitor was emerging if virologic failure occurred on raltegravir- or elvitegravir-containing treatment after four months or more; or if virologic failure occurred on dolutegravir- or bictegravir-containing treatment after four months or more, and the patient had previously experienced treatment failure with another integrase inhibitor. This presumptive definition was used to capture cases of emerging resistance where a resistance test had not yet been ordered.

The four-class analysis covered 16,019 people and showed that between 2008 and 2019, a total of 1.8% of people on treatment developed four-class resistance. Prevalence and incidence remained below 1% in all years.

Both three- and four-class drug resistance were associated with subtype B virus; higher zenith, or peak, viral load; and number of virologic failures.

The researchers concluded that the association between subtype B virus and multi-drug resistant HIV is likely to be a proxy for more extensive exposure to antiretroviral treatment and to suboptimal treatment.

These findings suggest that the development of new antiretroviral drugs and drug classes will be justified by the development of long-acting agents or reduced toxicity, rather than a need for agents to treat multi-drug resistant HIV.