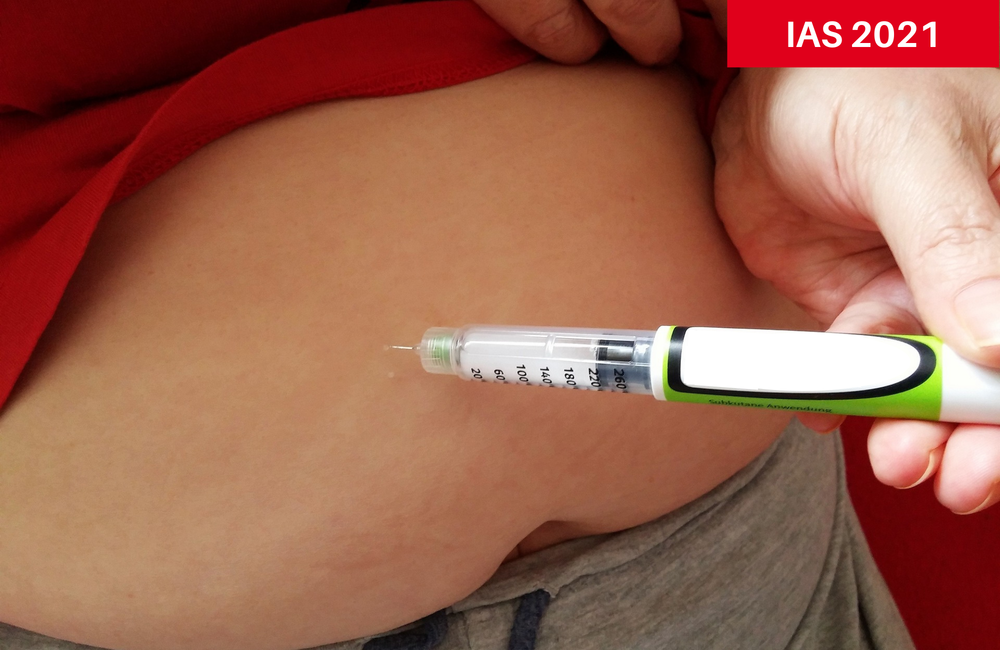 Eighty per cent of a group of people with HIV whose current antiretroviral therapy was not working, and who had resistance to most or all currently used drugs, achieved an undetectable viral load after being given lenacapavir, a drug currently under development that can be given just twice a year, the 11th International AIDS Society Conference on HIV Science (IAS 2021) heard this week. In the study, lenacapavir was taken as a subcutaneous (under the skin) injection in the belly.

Lenacapavir, being developed by Gilead Sciences, is a capsid inhibitor. The capsid is the ‘container’ for HIV’s RNA (genetic material) that is a distinguishing mark of the virus, appearing in microphotographs as a dark, cone-shaped core. Lenacapavir both inhibits the virus from unsheathing its capsid to release its genetic material (now transcribed into DNA) into the cell’s nucleus, and from assembling new capsids as it tries to reproduce.

Its remarkable longevity in the body was first presented to conferences in 2019 when it still only had the investigatory name of GS-6207. At this year's Conference on Retroviruses and Opportunistic Infections (CROI) in March, the first results were announced from the CAPELLA study, which is investigating the safety and efficacy of lenacapavir in a group of highly treatment-experienced people with extensively drug-resistant HIV whose current antiretroviral therapy (ART) regimens were failing. This found that during the initial two weeks of the study, 88% of participants receiving lenacapavir experienced at least a 0.5 log (more than threefold) drop in their viral load, compared with just 17% of those given a placebo.

This week Professor Jean-Michel Molina of Hôpital Saint-Louis in Paris presented results from the first six months of CAPELLA – of efficacy in the group of participants randomised initially to receive either lenacapavir or a placebo, and of safety in all study participants.

CAPELLA is not a placebo-controlled study in which some people never receive the investigatory drug; because it involves people who have few other treatment options, everyone ends up receiving subcutaneous lenacapavir for a year (i.e. three doses at beginning, middle and end), although some wait longer to receive it.

To join the study, at the time of screening people had to have a viral load over 400 copies/ml while on ART, HIV resistant to at least two drugs from three out of the four commonly used drug classes (nucleoside and non-nucleoside reverse transcriptase inhibitors, protease inhibitors and integrase inhibitors – NRTIs, NNRTIs, PIs and INSTIs) and no more than two fully active agents from any of those four classes.

Altogether, 72 people were enrolled in the study. After they were enrolled, they were screened a second time. If their viral load had declined to below 400 or by more than 0.5 logs since their first screen, then they were put straight into a non-randomised group in which they received open-label lenacapavir plus the best combination of other drugs, including other investigatory ones, that could be devised given their resistance profile (a so-called optimised background regimen or OBR). There were 36 people in this group.

If their viral load had not declined since screening then they went into a randomised group. In this, people received either oral lenacapavir or a placebo for two weeks – in other words, they were receiving “functional monotherapy”, as all other drugs in their regimen were failing. This was in order the gauge the separate contribution of lenacapavir to reducing their viral load – as was reported in March. After this two-week period of oral lenacapavir (a pill each on days one and two, and one more on day eight), this group of 24 had their first lenacapavir injection as well as an OBR.

The other 12 randomised participants had placebo pills for two weeks, then lenacapavir pills for two more weeks plus an OBR, then the injections.

In the study as a whole, the participants’ average age was 52 and 25% were women. More Black people (46% versus 31%) and Hispanic people (28% versus 14%) were in the randomised part than in the open-label group.

The efficacy results presented by Professor Molina cover the first 26 weeks of the study – the halfway point, just after people had received their second lenacapavir injection. Efficacy results from the open-label arm were not presented as some people had not yet reached this point.

In this randomised group, by week 26, 81% had viral loads below 50 and 89% below 400. This is despite the fact that in more than half of these 36 participants, researchers were unable to construct an OBR that had more than one active drug in it. Six people had no active drug in their OBR but nonetheless four of them achieved an undetectable viral load (i.e. 67% efficacy in participants on what was essentially lenacapavir monotherapy).

The eleven participants who did not have a viral load below 400 by week 26 were given resistance tests. Four had developed resistance mutations to lenacapavir but three of those, whose viral load had initially been suppressed but then rebounded, achieved viral suppression again, two without any change in their OBR (all remained on lenacapavir). One participant, who had no active drugs in their OBR, never achieved viral suppression, though their viral load did fall fiftyfold.

The average CD4 count in this randomised group rose from 143 at baseline to 224 six months later and the proportion with CD4 counts below 50 fell from 22% to zero.

There were no serious drug-related adverse events seen. A number of participants had injection site reactions, such as redness, swelling and pain, but most of these had resolved within two weeks. However, 18% of participants had longer-lasting nodules or small lumps under the skin at the injection site and 11% had induration or hardening of the tissue there. These lasted 22 weeks and 10 weeks on average, respectively.

Lenacapavir is also being studied for use in patients new to treatment: early results from this study will be reported to IAS later this week.