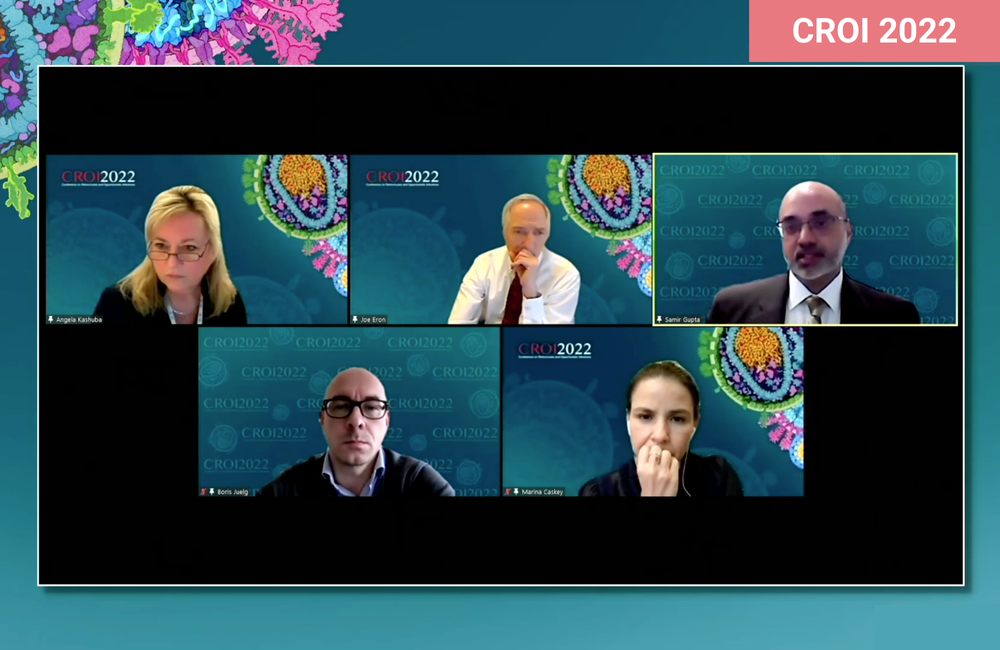 Lenacapavir, a long-acting HIV capsid inhibitor that could potentially be given every six months, continues to show good viral suppression, both in people starting antiretroviral therapy for the first time and in highly treatment-experienced people with multidrug-resistant virus, according to studies presented last week at the Conference on Retroviruses and Opportunistic Infections (CROI 2022).

Lenacapavir (formerly known as GS-6207), from Gilead Sciences, disrupts the HIV capsid, the cone-shaped shell that surrounds the viral genetic material and essential enzymes. Laboratory studies have shown that it interferes with multiple stages of the HIV lifecycle. Because it works differently from existing drugs, it remains active against virus that has developed resistance to other antiretroviral classes. What's more, lenacapavir's long half-life in the body suggests it has the potential for long-acting treatment or PrEP (regular medication to prevent HIV infection).

The phase II CALIBRATE trial is evaluating lenacapavir as a component of first-line treatment. The study enrolled 182 previously untreated people with HIV. The median age was 29 years, half were Black and 45% were Latino. However, representation of women was low, at just 7%. All had a viral load of at least 200, including 15% with a high viral load above 100,000. The median CD4 count was 437, and no one had a CD4 count below 200.

The participants were split into four groups. After a two-week lead-in period on oral lenacapavir, two groups started subcutaneous injections of lenacapavir every six months plus daily oral tenofovir alafenamide/emtricitabine (the drugs in Descovy). At 28 weeks, those with an undetectable viral load simplified their oral medications. One group dropped emtricitabine and continued on daily tenofovir alafenamide (TAF) alone for another six months (treatment group 1; n = 52). Another group dropped TAF/emtricitabine and continued on the once-daily integrase inhibitor bictegravir alone (treatment group 2; n = 53).

At last summer’s International AIDS Society Conference on HIV Science (IAS 2021), Professor Samir Gupta of Indiana University presented the first findings from the study. At 28 weeks, everyone in the control group and 94% of those taking oral or injectable lenacapavir had an undetectable viral load (under 50).

Just six participants met the criteria for drug resistance testing. Of these, one person in treatment group 2 and one in treatment group 3 showed evidence of emergent lenacapavir resistance mutations. In both cases, the pattern of emergent mutations or drug levels and pill counts pointed to poor adherence to TAF/emtricitabine, meaning lenacapavir was essentially working on its own.

Along with high rates of viral suppression, people in all four groups saw similar CD4 count increases: 206, 212, 220 and 193, respectively.

Treatment with lenacapavir was generally safe and well tolerated. Pooling data from all three lenacapavir treatment groups, there were no serious or grade 4 adverse events related to the study drug. The most common adverse events were headache, nausea and COVID-19. Gastrointestinal side effects were more frequent in the lenacapavir groups compared with the control group (13% vs 4%), and diarrhoea and vomiting – but not nausea – appeared to be more common with the oral compared with the injectable formulation. About a quarter of participants in both the lenacapavir and control groups experienced grade 3 or 4 laboratory abnormalities, but none were considered clinically relevant or led to discontinuation.

Some 9% to 14% of people in treatment groups 1 and 2 experienced injection-site reactions such as swelling, redness, pain or nodules; in general, these were less common after the second lenacapavir jab. Pain and swelling were temporary, but nodules and induration (hardness at the injection site) lasted a median of about 200 days. These side effects were mostly mild, but one person had a grade 3 nodule after the second jab and three people discontinued due to injection-site reactions.

These findings, Gupta concluded, support the ongoing evaluation of lenacapavir for HIV treatment and prevention.

The phase II/III CAPELLA trial is evaluating lenacapavir in heavily treatment-experienced people. This study enrolled 72 people with resistance to at least two medications from three of the four major antiretroviral classes. About 75% were men, 38% were Black and 21% were Latino. The median age was 52, they had been living with HIV for 24 years on average and they had tried a median of 11 antiretroviral medications. They were currently on antiretroviral therapy but unable to maintain viral suppression. About two thirds had advanced immune suppression with a CD4 count below 200.

The first 36 participants were randomly assigned to add either oral lenacapavir or a placebo to their failing regimen for 14 days. During this period, lenacapavir was essentially functioning as monotherapy. At that point, everyone was offered lenacapavir given by subcutaneous injection every six months plus an optimised background regimen selected based on resistance testing. Another 36 people in a non-randomised open-label cohort received lenacapavir plus an optimised background regimen from the outset, starting with a 14-day oral lead-in before switching to injections. In both cohorts combined, more than half had only one or no active agents in their background regimen.

At last year’s CROI, researchers reported that at the end of the initial 14-day period, 88% of participants in the lenacapavir group experienced at least a 0.5 log drop in viral load, compared with just 17% in the placebo group, and those taking lenacapavir saw a significantly greater mean change in viral load (-1.93 versus -0.29 log).

At IAS 2021, researchers presented follow-on results from the randomised portion of the study after more participants had received their second injection. In this analysis, 81% had HIV RNA below 50 and 89% had a viral load below 200 at 26 weeks.

A poster at this year’s CROI described updated results at 52 weeks for participants in the randomised cohort and at 26 weeks for the open-label cohort (most of whom had not yet reached the 52-week mark).

Here too, lenacapavir was generally safe and well tolerated with no drug-related serious adverse events. The most common adverse events were diarrhoea, nausea and COVID-19. There were no clinically relevant grade 3 or 4 lab abnormalities. Injection-site reactions were similar to those seen in the first-line treatment trial. Again, most were mild to moderate and transient, but some participants experienced prolonged nodules or induration. One person discontinued the study at week 52 due to a nodule.

Findings from these two studies show that lenacapavir has the potential to be used as a component of a long-acting treatment regimen, but there are currently no other antiretrovirals that can be given at such a long interval.

The approved regimen with the longest duration, injectable cabotegravir (Vocabria) and rilpivirine (Rekambys), is administered monthly or every two months. Merck’s experimental nucleoside reverse transcriptase translocation inhibitor, islatravir, has a long half-life and has shown promise for long-acting HIV treatment and prevention (including an implant that maintains drug levels for a year), but islatravir trials are on hold due to unexplained side effects. Gilead is working on a set of broadly neutralising antibodies against HIV that could potentially be used for long-acting treatment.

Long-acting PrEP is a different story because a single drug is enough to prevent HIV infection on its own. Studies of twice-yearly lenacapavir injections for PrEP are currently underway.