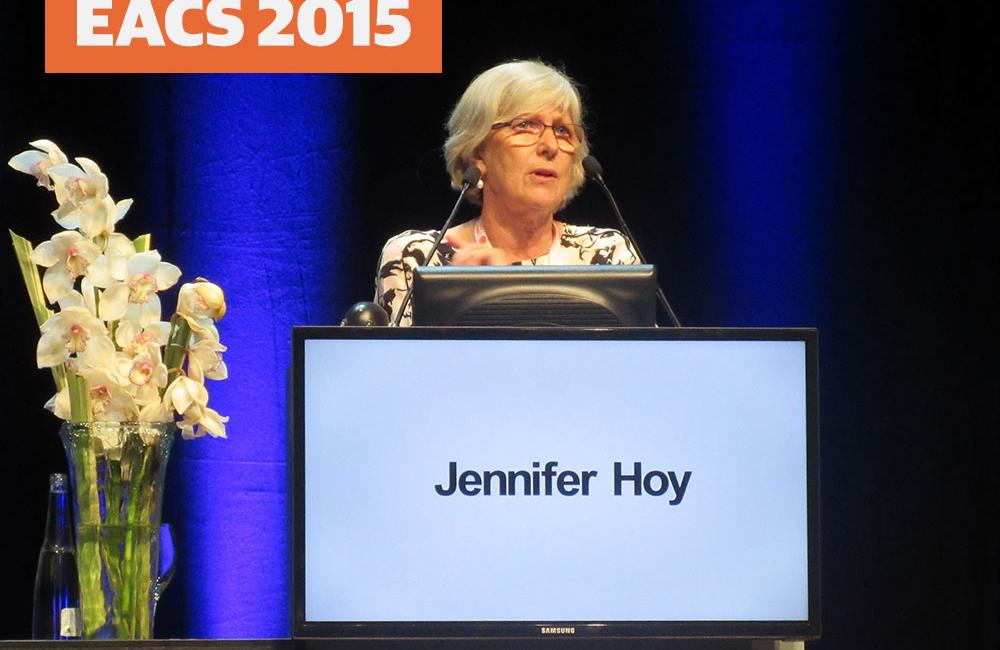 Jennifer Hoy, presenting at EACS 2015. Photo by Liz Highleyman, hivandhepatitis.com
This article is more than 7 years old. Click here for more recent articles on this topic

Participants who started antiretroviral therapy (ART) soon after HIV diagnosis in the large START trial showed a greater decrease in bone density at the hip and spine compared to those who deferred treatment, researchers reported at a joint session of the 15th European AIDS Conference and the 17th International Workshop on Co-morbidities and Adverse Drug Reactions in HIV last week in Barcelona. There was no significant difference in the likelihood of fractures, however, and two other START sub-studies saw no differences in lung function or neuropsychological performance between people randomised to immediate or deferred ART.

Starting antiretroviral treatment before the development of serious immune system damage greatly reduces the risk of HIV disease progression and death, but early treatment can potentially also have drawbacks including longer exposure to toxic drugs. The INSIGHT START (Strategic Timing of Antiretroviral Treatment) trial was designed to address the long-standing controversy over the optimal timing of HIV treatment, especially for people who still have high CD4 counts.

START enrolled 4685 adults living with HIV in 35 countries who entered the trial with a CD4 count above 500 cells/mm3. They were randomly assigned to either start treatment at study entry or delay therapy until their CD4 count fell below 350 cells/mm3 or they developed AIDS-related symptoms.

Overall, nearly three-quarters were men and the group was quite young (average age 36 years). They had good immune function at baseline, with a median CD4 count of 651 cells/mm3. Over the course of follow-up, the CD4 count of people in the deferred group was 194 cells/mm3 lower, on average, than that of the immediate group.

The START Data Safety and Monitoring Board stopped the randomised portion of the trial ahead of schedule in May 2015 after it determined that there was already enough evidence to show a benefit of immediate treatment. At that point the average follow-up time was three years.

The primary START results, presented this summer at the International AIDS Society Conference in Vancouver and published in the August 27 New England Journal of Medicine, showed that participants randomised to start ART soon after HIV diagnosis had a significantly lower risk of illness and death than those who waited. The immediate treatment group not only had a 72% lower risk of AIDS-related infections and malignancies compared to the deferred group, but also were 39% less likely to experience serious non-AIDS events (heart, liver and kidney events and non-AIDS cancers) or death.

The START design included several sub-studies looking at the effects of early versus deferred therapy on specific outcomes known or suspected to be associated with HIV infection or its treatment, including bone density, lung function and neurocognitive function.

Jennifer Hoy of Monash University and the Alfred Hospital in Melbourne, Australia, presented findings from the START bone mineral density (BMD) sub-study. This analysis included 193 people randomised to the early ART group and 204 in the deferred ART group.

Sub-study participants underwent dual X-ray absorptiometry (DEXA) scans of the lumbar spine, total hip and femoral neck at baseline and annually thereafter. The researchers looked at Z-scores, a measure of deviation from BMD norms for people of the same age, sex and race, as well as T-scores, based on the norm for young white women.

Looking at known or potential risk factors for low bone density, 19% were current smokers, 4% were heavy drinkers, 12% reported recreational drug use, 4% had hepatitis C virus (HCV) co-infection and 13% of the women were in menopause. Body weight and kidney function were normal (median BMI 24; median eGFR 114 ml/min). Baseline Z-scores were below the norm (-0.3 for the hip; -0.8 for the spine). More than a third (38%) met the criteria for low BMD, 3% had osteoporosis and 8% reported previous fractures.

Over a mean follow-up period of 2.2 years, total spine BMD decreased in the immediate ART arm during the first year (by about 2.0%) and then stabilised, while remaining about the same in the deferred arm (less than -0.5% decline). Total hip BMD continued to decline over three years in both arms, but the percentage loss was greater in the immediate compared to the deferred group (about -2.0% vs -0.5% at 12 months and -3.5% vs -2.0% at 36 months). These differences were statistically significant for spine BMD at 12, 24 and 36 months, and for hip BMD at 12 and 24 months (only about 30% of participants had the third year DEXA).

Having a lower CD4 count was associated with greater bone loss at the spine, while longer time since HIV diagnosis was the major factor affecting hip bone loss, Hoy said. However, the only significant risk factor in an adjusted analysis was using a protease inhibitor in the first ART regimen.

Looking at osteoporosis and bone fractures, risk was low in both groups. Seven people in the immediate ART group and four people in the deferred group (1.72 and 0.90 per 100 person-years [PY]) were diagnosed with osteoporosis, giving a hazard ratio of 2.0 or twice the risk, but the difference was not significant (p = 0.27).

In summary, this analysis showed "significantly greater loss of BMD at both the hip and spine in those randomised to immediate ART," the researchers concluded, but there was "no evidence of difference in development of osteoporosis between groups (or fractures in the main START study)."