HIV diagnoses in English gay men have been falling since 2014 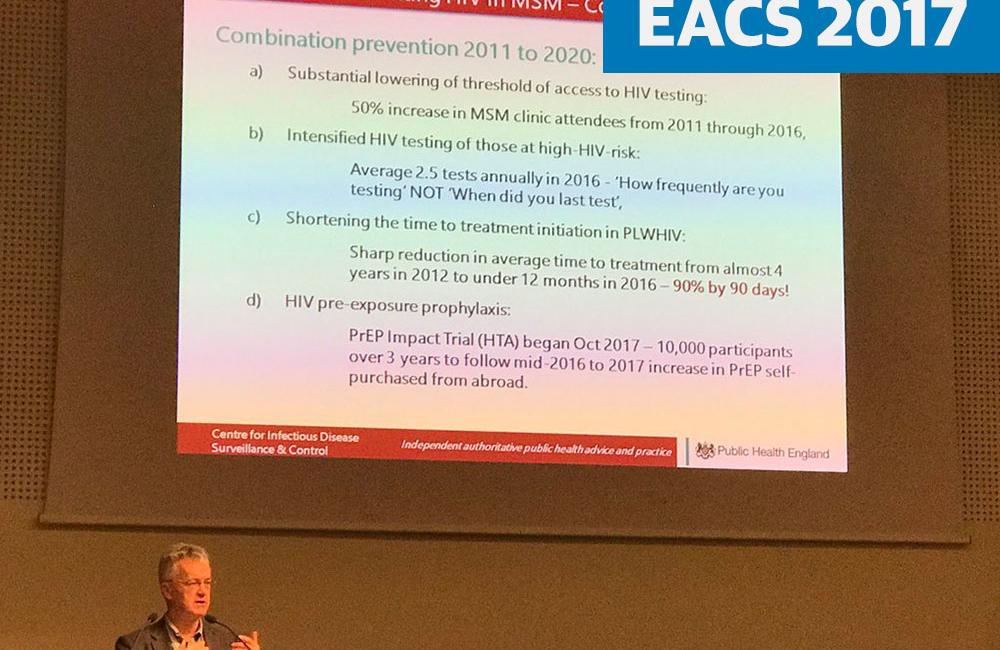 A new analysis by Public Health England of testing rates and HIV diagnoses from all of England’s sexual health clinics shows that the decline in diagnoses is England-wide, started at least a year before the decline was first noticed at London's 56 Dean Street clinic, and is not restricted to gay men who test frequently.

One of the big stories in HIV prevention this year has been the dramatic drop in HIV diagnoses being seen among gay men in HIV clinics in London. This started when, less than a year ago, Dean Street clinic announced a 40% drop in infections in 2016. This trend, there and at other inner London clinics, has been maintained to the extent that there were only four HIV diagnoses at Dean Street in October 2017 compared with 60 in October 2015 – a drop of 93%.

However Noel Gill of Public Health England, presenting data from English sexually transmitted infection (STI) clinics at the recent 16th European AIDS Conference (EACS 2017) in Milan, said that there was evidence that the falls in HIV diagnoses had started earlier and were national.

What has caused the decline in diagnoses? Noel Gill did not ascribe it to any one cause, but said that the “lower threshold of access to HIV testing” with results available within an hour and the use of self-sampling and, increasingly, self-testing as options were all helping. He also said it was important that STI clinics in the UK were generally “held in high regard” by their users.

An increase in attendances and in the frequency of HIV testing among gay men are associated with the declines in diagnosis.

The quarterly number of HIV tests among frequently testing gay men increased from roughly 3500 per quarter in 2012 to over 8200 in 2017 and in men who tested less frequently from about 4500 to about 7000. However, the number of tests in the less-frequent testers has stayed at that level since early 2015 and may even have fallen slightly. This may indicate that there needs to be new encouragement for frequent testing among gay men who are not aware of the importance of testing frequently, or who are not at high risk or do not see themselves as ‘high risk’.

In infrequent testers there were more diagnoses, but the decline in diagnoses was also more marked. They averaged 150 per quarter in 2012-13, increased to about 200 a quarter in 2014, but started to decline from mid-2015 onwards and in the second half of 2016 were only averaging 80 per quarter.

The public health significance of frequent testing is only fully realised if people who are diagnosed start antiretroviral therapy (ART) as soon as possible, as reducing the time spent between infection and viral suppression is the most critical factor in bringing down HIV transmission.

So far, Gill said, the three most important factors contributing to the observed decline were:

He did not speculate on whether there was an additional role for pre-exposure prophylaxis (PrEP), as the decline in diagnoses started happening before its more widespread availability. However, PrEP may have subsequently accelerated the decline in the inner-London clinics, as the rate of decline in clinics like Dean Street and Mortimer Market is both more recent and steeper than that seen in the Public Health England data. San Francisco is another example of a city where HIV diagnoses were already declining but where the rate of decline increased after clinic attendees started using PrEP.

21 September 2022
Telling people you have HIV

An HIV vaccine is “more than five years away,” although the application of mRNA technology may help accelerate production.
Bloomberg
15 Sep 22
More editors' picks