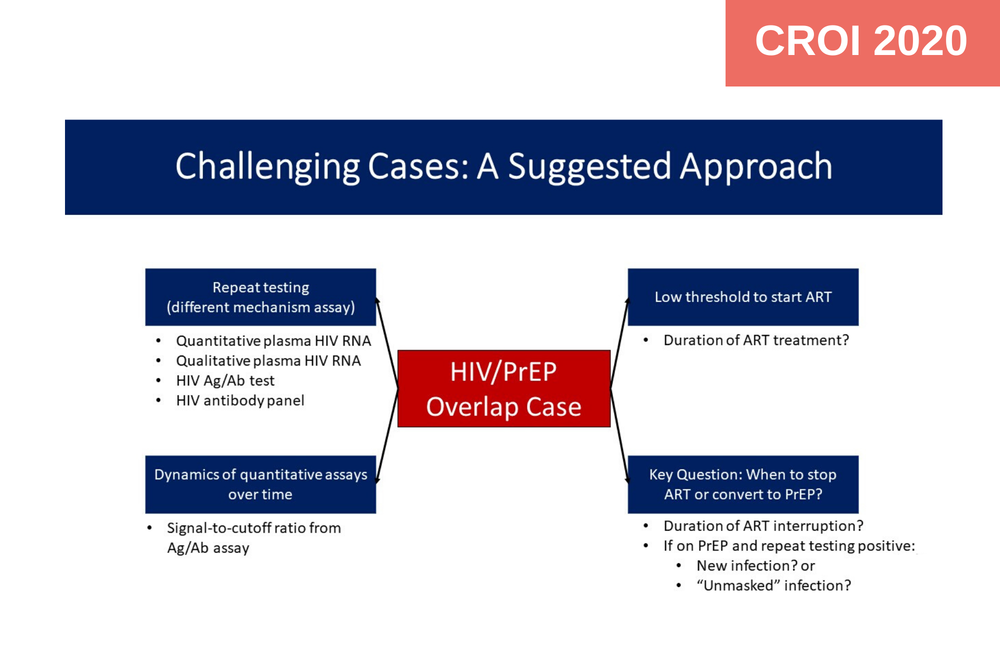 Eleven cases of PrEP use during undiagnosed early HIV infection – dubbed ‘HIV/PrEP overlap’ – were documented in a study by Dr Michael Peluso from the University of California, San Francisco (UCSF). He presented possible explanations for these cases to the Conference on Opportunistic Infections and Retroviruses (CROI 2020) last week.

HIV pre-exposure prophylaxis (PrEP) has been found to be incredibly effective if used as directed (either daily or as on-demand PrEP), preventing 99% of infections. It is estimated that three million people worldwide may benefit from using PrEP. True PrEP failure in cases of documented good adherence is rare; this is usually caused by the transmission of a resistant virus.

However, PrEP use during early undiagnosed HIV infection may complicate diagnosis by reducing or delaying the detection of viral antigens or an individual’s antibody responses to the virus.

Fifty-eight participants were enrolled as part of the UCSF Treat Acute HIV Study. This study provides an opportunity to investigate issues such as the overlap of early HIV infection with PrEP use by enrolling participants with a suspected new infection from testing and treatment sites around San Francisco. Once acute HIV infection is confirmed, participants initiate antiretroviral therapy (ART) immediately and are closely monitored.

Of the 58 participants, 87% were men who have sex with men; their median age was 30 and median time to diagnosis 29 days. Thirty-four participants had never been on PrEP while 40% of participants had taken PrEP at some point; there were eleven cases of HIV/PrEP overlap.

These cases included six participants where HIV was believed to be acquired while on PrEP and five who initiated PrEP but were found to have HIV as part of their PrEP evaluation. Those with HIV/PrEP overlap generally had lower viral loads and were more likely to have discordant test results (67%).

Of these eleven cases, researchers identified three scenarios that illustrate some of the diagnostic challenges in these situations.

In this instance, there is suspected emerging resistance to PrEP that develops rapidly when two-drug PrEP (Truvada or tenofovir disoproxil fumarate/emtricitabine) is initiated when there is an existing high viral load.

However, on the seventh day after starting PrEP, HIV antigen/antibody tests came back positive, with a viral load of over 200,000 copies. Genetic testing revealed an M184I mutation (conferring resistance to one of the components of PrEP, emtricitabine). Further testing done on the original sample suggested that this resistance emerged rapidly (instead of being sexually transmitted) after starting PrEP.

This case illustrates the potential risk of initiating two-drug PrEP without viral load testing in individuals with acute infection, as antibody tests done during this time may provide a false negative result.

Peluso suggested that if exposure levels are very high, PrEP may potentially be less protective despite good adherence. Thus, there may be a threshold where PrEP is “overwhelmed” and loses its effectiveness due to high levels of exposure to HIV.

A 24-year-old man who had been taking PrEP for a year and reported good adherence presented for a follow-up visit. Three months prior to this visit, he had a negative antigen/antibody test. However, at the visit he tested positive on a fourth-generation antigen/antibody test, with the same result when the test was done a week later. Cell-associated HIV RNA testing was positive a month later, confirming the diagnosis. The man reported that one month prior to his follow-up visit, he had had a substantial increase in sexual activity, engaging in condomless receptive anal sex with approximately 45 partners over a two-week period.

In the absence of objective PrEP adherence data, this case merely provides the basis for the idea that PrEP could potentially be overwhelmed as a result of high exposure despite good reported adherence. It is comparable to a case in Amsterdam. One statistical modelling suggests that more than 90 high-risk sexual acts per month may overwhelm PrEP, thereby decreasing its effectiveness.

A 54-year-old man who had previously taken PrEP for a year presented for HIV testing. He had discontinued PrEP a month prior to this visit due to infrequent sexual activity. His last antigen/antibody test (two months prior to this visit) was negative.

An HIV RNA test showed detectable HIV below 20 copies. A week later, HIV RNA was not detected on an assay with a limit of 40 copies. Three weeks after starting ART, intact proviral HIV DNA was detected. Further testing is pending.

Initially, researchers thought that this participant had aborted infection after exposure, with PrEP taken three days after his sexual encounter acting as post-exposure prophylaxis (PEP). However, this does not appear to be the case. If diagnosis is confirmed, this could be the earliest instance of documented HIV treatment to date. This case indicates that a 72-hour window with two-drug PEP may be insufficient to prevent the establishment of an HIV reservoir.

“PrEP confers significant benefit in the vast majority of cases, but HIV/PrEP overlap may lead to challenges in diagnosing HIV infection,” Peluso explained. “In such cases, it is important to adjudicate three factors: the host response, the viral characteristics (particularly resistance), and objective metrics of PrEP adherence.”

He suggested using the approach in the illustration at the top of the page in challenging cases of HIV/PrEP overlap, which includes repeat testing using different assays and having a low threshold to initiate ART. However, an unanswered question remains as to when it would be deemed safe to stop ART or convert to PrEP.