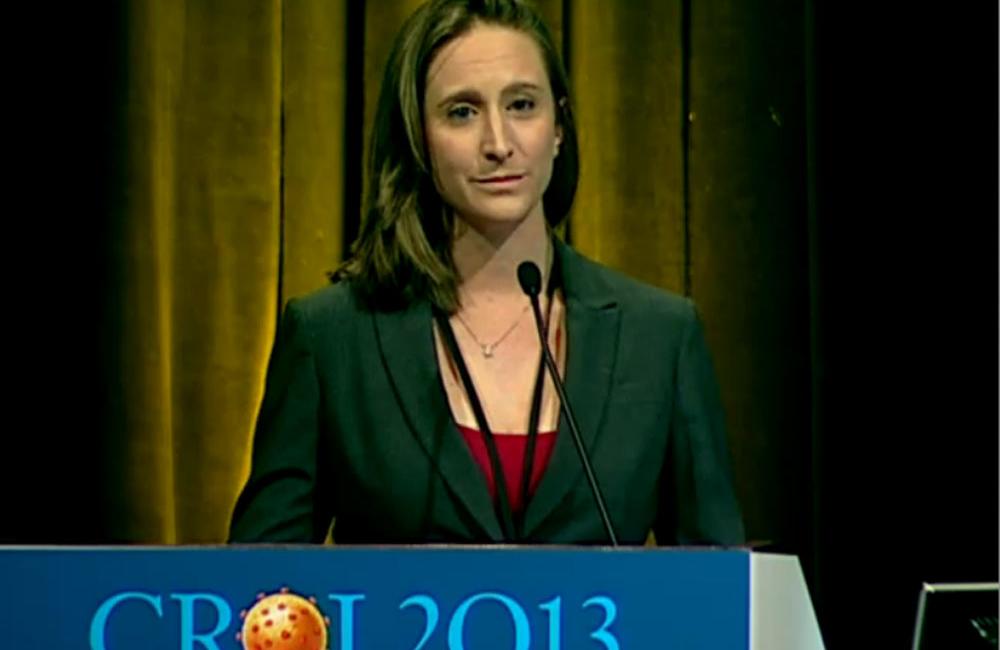 Dr Chelsea Polis of USAID presenting at CROI 2013.
This article is more than 10 years old. Click here for more recent articles on this topic

The concerns about a possible increase in risk of HIV acquisition with some hormonal contraceptive methods need to be understood in the context of the substantial uncertainties in the body of evidence, and considered alongside the life-saving benefits of hormonal contraceptive use, Dr Chelsea Polis of USAID told the 20th Conference on Retroviruses and Opportunistic Infections (CROI 2013) in Atlanta last week. This “leaves us in a real public health conundrum”, she said.

The conundrum is made more difficult by the knowledge that the concerns focus on the injectable contraceptive depot medroxy progesterone acetate (DMPA, sometimes sold as Depo-Provera). While in some regions, DMPA is one of the only highly effective contraceptive methods that is accessible and acceptable, some of these regions (especially southern and eastern Africa) also have a substantial burden of HIV infection.

A number of studies show oral contraceptive pills to be safe and limited data suggest that injectable depot contraceptive NET-EN (Noristerat) is safe too.

But there are virtually no studies which can answer questions about implants, skin patches, vaginal rings and hormonal intrauterine devices.

Polis was one of the epidemiologists who took part in the systematic review which led the World Health Organisation to conclude a year ago that there is not yet sufficient evidence to advise against the use of DMPA injections. At CROI, Polis summarised the review data, which she had previously presented at the International AIDS Conference last year.

She also pointed to more recent data, which need to be taken into account when the systematic review is updated – the MDP301 study (described below), the MIRA trial, and a re-analysis of the large study that first drew the media’s attention to the issue in 2011.

Each of these have suggested that injectable DMPA may increase a woman’s risk of HIV infection, but several previous studies have had quite different findings.

There are also real doubts as to whether the results are skewed by factors which the researchers haven’t been able to fully take into account, particularly differences in the sexual behaviour of contraceptive users and non-users. While studies have asked about condom use, the questions do not capture much detail and some women may give the answer that they think the researchers want to hear.

Moreover, in the studies that have found that DMPA increases the risk of acquiring HIV, the size of that effect has varied from something quite modest to a doubling of risk.

It is therefore clear that no single study should be treated as clearly answering the question, but that we need to look at systematic reviews and meta-analyses. These are analyses of all the previous studies that meet predefined requirements.

As well as Polis’ systematic review, Charles Morrison at FHI 360 is conducting a meta-analysis that is due to be made public later this year. It will pool the data from 18 studies, including around 37,000 women, over 1800 of whom became HIV positive. Crucially, it will look at individual patient data, rather than just each study’s published results – this should improve the quality of the data, analyses and results.

At CROI last week, Dr Angela Crook of the Medical Research Council presented a secondary analysis from the MDP301 trial, which was a study of the PRO 2000 microbicide (and which found the microbicide to be ineffective). Data were presented on 8663 women under the age of 50, from South Africa, Zambia, Tanzania and Uganda. HIV testing occurred every three months, and after one year, 382 women had acquired HIV.

Data on contraceptive use was recorded monthly – this was more frequent than in some other studies, and allows for the analysis to take switches of method into account. However, adherence was not recorded.

Initial, unadjusted results showed an increased HIV incidence in women using two types of contraceptive injections – DMPA (Depo-Provera) and norethisterone oenanthate (NET-EN,Norigest, Noristerat). Hazard ratios for both were 1.8. There was no increase in HIV in users of oral contraceptive pills.

However the researchers conducted a number of analyses, taking into account switches to different methods as well as the women’s age, study recruitment site, condom use, frequency of sex and experience of vaginal discharge, chlamydia and HSV-2.

In the final analysis, there was no increased HIV risk for users of NET-EN or oral contraceptives. Users of DMPA were at increased risk of acquiring HIV, but to a lesser extent than the unadjusted analyses suggested – hazard ratio 1.4 (range 1.02-1.92).

The initial results were considerably skewed by age (younger women were more likely to be put on injectable contraceptives) and by study site. There were significant differences between the sites in the types of contraception provided and there may also be unmeasured differences in the characteristics of participating women.

“Consistent with previous studies, a small increased risk of HIV did remain for women using DMPA,” concluded Angela Crook. “But, as in all observational studies, we cannot rule out that there are some confounding factors that we haven’t been able to accurately account for.”

Smith tested two different assumptions of the degree to which DMPA raises the risk of HIV infection – a modest increase (risk ratio 1.2) and the largest increase that has been reported (risk ratio 2.2).

But if women stopped using DMPA and either switched to the other methods which are commonly used in their own country or stopped using contraception altogether, the effects would not all be positive and would vary from country to country. The model takes into account national differences in the range of contraceptives used, HIV infection rates and maternal health outcomes.

In Kenya, there would be between 2900 and 14,000 fewer HIV infections (depending on the assumption), but 300,000 unintended pregnancies and 1200 extra maternal deaths each year.

In Nigeria, there could be between 800 and 4600 fewer HIV infections, but 126,000 unintended pregnancies and 770 extra maternal deaths.

South Africa is the country where injectable contraception may be having the greatest impact. Based on the model’s assumptions, switching away from its use might result in between 12,600 and 59,000 fewer HIV infections each year. This would be at the cost of 360,000 unintended pregnancies and 850 maternal deaths.

In countries with a lower incidence of HIV infection, the impact on maternal health would be substantial. In Indonesia, there might be between 400 and 1900 fewer HIV infections, at a cost of 1,760,000 unintended pregnancies and 4,000 maternal deaths.

In India, there could be between 20 and 110 fewer HIV infections, but 23,000 unintended pregnancies and 60 maternal deaths.

Jennifer Smith noted that this is not the only modelling work looking into this question – other results have been reported by the World Health Organization and the Population Council.

She concluded that the overall impact in each country is highly dependent on local factors as well as the true biological effect of injectable hormonal contraception on HIV acquisition.

If DMPA really does double the risk of HIV infection, some countries in southern and eastern Africa could possibly benefit in switching to other contraceptive methods – as long as safe, effective, feasible and acceptable alternatives are provided.

But if the effect size is in line with the more modest assumption (risk ratio 1.2), “it is unlikely that any change in contraceptive policy could result in public health benefit, with the possible exception of South Africa”. The burden of unintended pregnancies and maternal deaths would be too great.

The research described above is about the risk of an HIV-negative woman acquiring HIV. A related, but distinct, question is whether an HIV-positive woman is at greater risk of transmitting HIV to her male partner if she uses injectable hormonal contraception.

This is a particularly crucial issue as DMPA is a privileged option for women with HIV – it is one of the few hormonal contraceptives that does not have reduced efficacy in the presence of antiretroviral drugs.

Other studies have used proxy or indirect measures to shed light on the issue. Taken together, the studies that have examined women’s genital HIV shedding have had mixed and inconclusive results. And studies have, with one exception, not found that injectable contraception use raises plasma viral load.

At CROI this year, three-year data were presented on a cohort of 99 Kenyan women who were taking antiretroviral therapy and who reported high levels of adherence. Treatment was effective in suppressing HIV viral load to below 400 copies/ml in plasma (at 85% of study visits) and cervical secretions (94% of study visits).

Crucially, this did not differ between women who used DMPA and women who had no hormonal contraception.

The study therefore suggests that even if DMPA does normally increase HIV viral load (which remains unproven), antiretroviral therapy is powerful enough to counteract this and suppress viral load to undetectable levels. Dr Summer Day of the University of Washington, who presented the research, called for women wishing to use hormonal contraception to be given priority access to antiretroviral therapy.

Polis C, Heffron R What Have the Epidemiological Studies Taught Us about Hormonal Contraceptives and HIV-related Risks? 20th Conference on Retroviruses and Opportunistic Infections, Atlanta, presentation 113, 2013.

Crook A et al. Hormonal Contraception and Risk of HIV: An Analysis of Data from the Microbicides Development Programme Trial. 20th Conference on Retroviruses and Opportunistic Infections, Atlanta, abstract 28, 2013.