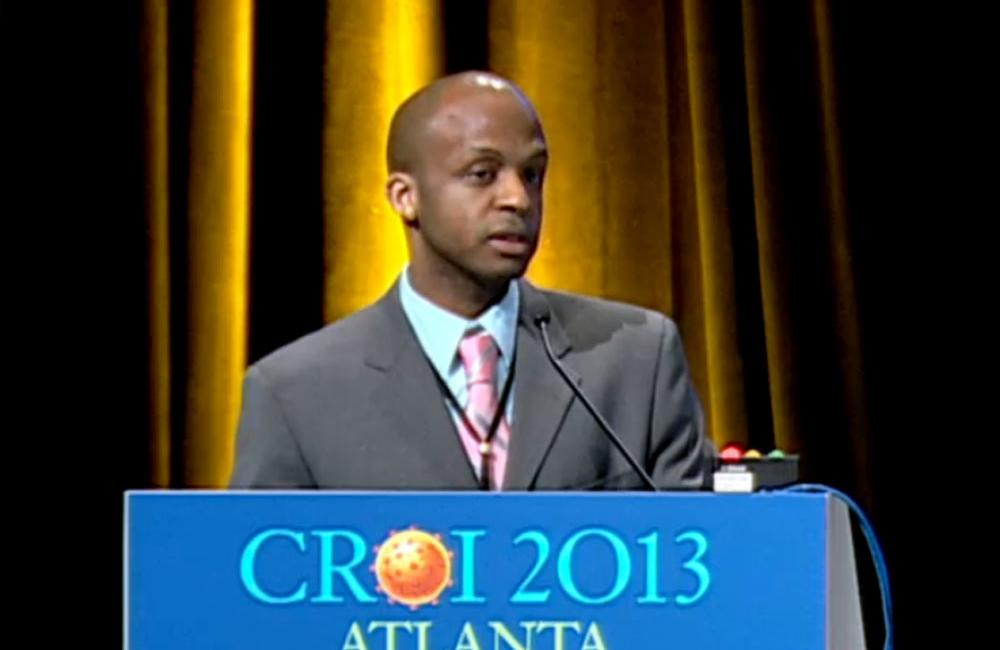 Hyman Scott, University of California, San Francisco, presenting at CROI 2013.
This article is more than 10 years old. Click here for more recent articles on this topic

An analysis of four studies of sexual risk and HIV infection in US gay men, presented at the 20th Conference on Retroviruses and Opportunistic Infections (CROI 2013), has found a 22% higher risk of HIV infection per sexual contact in black gay men that is not explained by other factors such as number of sexual partners, injecting drug use or age.

Young men who have sex with men (MSM) and MSM of colour have the highest HIV incidence rates in the US. Black people form 12% of the US population but have 45% of new HIV diagnoses and, while new HIV diagnoses stayed steady amongst most population groups in the last three years, they increased by 48% in young black gay men.

This is not explained by individual risk behaviour: young gay black men actually have fewer partners and lower rates of recreational drug use than other gay men.

Researchers from the University of California, San Francisco, and the San Francisco Department of Public Health, used data from surveys of gay men that were conducted from 1992 to 2003 to find out if young men and black men had a higher per-contact risk of HIV infection that was not explained by other behavioural or demographic factors.

They looked at four studies:

The CDC researchers looked at how, in the four different trials, the number of sexual contacts varied the risk of acquiring HIV.  They then related these to the kind of sex (insertive, receptive protected or receptive unprotected) men reported and whether the partner’s status was HIV positive, HIV negative, or unknown. They also asked about injecting drug use, though in the analysis this had no effect on HIV infections.

Using these figures, they were able to calculate the chance of becoming infected with HIV per sexual contact of a given type and to what degree unprotected sex increased this risk.

These figures are for the three studies that took place after antiretroviral availability. Figures were little different in the Jumpstart study, with per-contact risks of one in 167, one in 714 and one in 2500 for unprotected receptive and insertive sex and protected receptive sex respectively. These risks were not statistically different from those in the other studies.

Averaged across studies, the risk for unprotected receptive sex with partners of unknown HIV status was one per 204 contacts – not much less risky than with known HIV-positive partners.

Risk varied between studies, with the HIV risk in VAX004 72% higher and in EXPLORE 13% lower than in the VPS study.

Unadjusted for other factors, men under 25 had a 31% higher per-contact risk of being infected, and black men had a 78% higher risk.

This was not because black men had more unprotected sexual contacts. On the contrary, they had considerably fewer – just three for receptive sex and five for insertive sex on average in six months, compared with eleven and twelve respectively for white men.

It varied just as much if not more for ethnicity: it was 1 in 141 for white men (and almost the same for Latino), and 1 in 96 for black men and ‘others’ (which were mainly men of mixed race). However, because of relatively few trial visits and HIV infections in black men, this difference was not actually statistically significant.

Adjusting it by age reduced the increased risk to a 22% higher risk for black men (because they tended to be younger), but an added risk remained.

Why the higher risk for black men? This is the unanswered question, and isn’t explained by this study – the findings of which have been observed in other studies too. Black men were in a minority in the studies used, and made fewer study visits, so the figures for them have more uncertainty.

It may be simply because HIV prevalence is higher in US black men so they are generally in a higher-risk environment. Health inequalities also mean that partners are less likely to have undetectable viral loads.

Other factors may include different degrees of knowledge of partners’ HIV status, and presenter Hyman Scott commented that there was some evidence that black men might not so often be doing other things that reduce HIV risk, such as withdrawal before ejaculation.

Scott H et al. Age and Racial Disparities in Per-contact Risk of HIV Seroconversion among Men Who Have Sex with Men: US. 20th Conference on Retroviruses and Opportunistic Infections, Atlanta, Abstract 91, 2013.

A webcast of the session in which this research was presented, North and South: epidemiology and engagement in care, is available on the conference website.

Who are trans women acquiring HIV from?

The HIV groups were responding to a statement that criticised the Ministry of Health’s plans to provide PrEP for free in several selected public health clinics in states with high HIV prevalence from January 2023.
CodeBlue
7 Dec 22
Men who have sex with men (MSM)

Most large clusters of HIV transmission taking place in the United States occur among men who have sex with men, many of whom are minorities, according to a CDC report.
Infectious Disease Special Edition
31 Oct 22
Sexual transmission

How to Avoid STI Transmission When Sharing Sex Toys

Toys are a fun and safe way to explore sexual play with yourself, one partner, or many partners, as long as you properly care for your toys.
TheBody
22 Dec 20
Sexual transmission