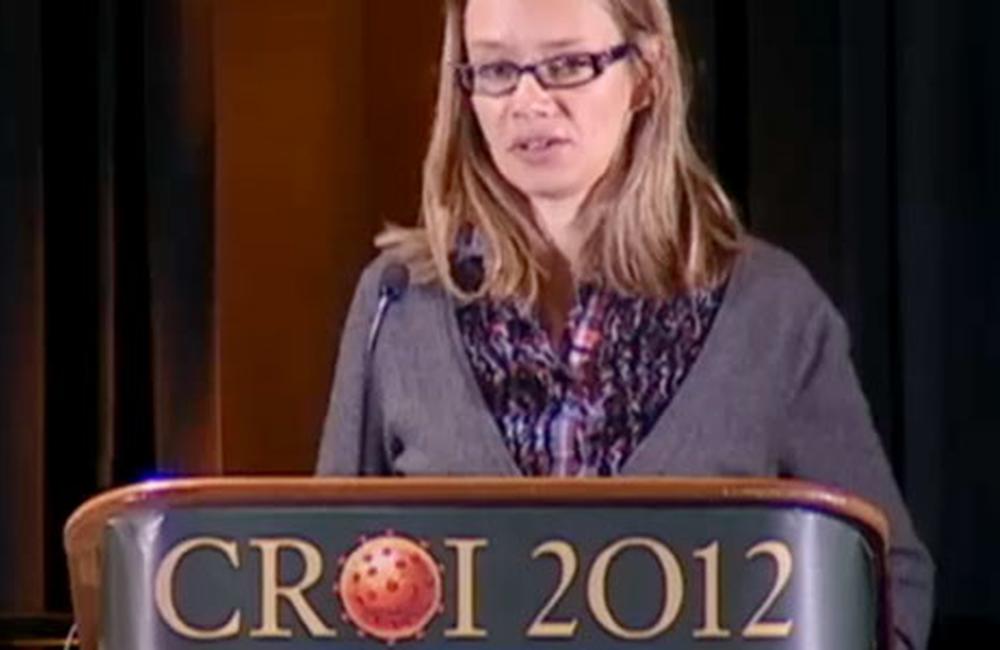 Sabrina Locatelli, presenting at CROI. (http://retroconference.org)
This article is more than 9 years old. Click here for more recent articles on this topic

A group of scientists working in Ivory Coast may have discovered a case of infection of a human with a novel variety of an animal immunodeficiency virus, in circumstances that suggest it was a direct infection from an animal. The research was presented at the 19th Conference on Retroviruses and Opportunistic Infections (CROI) in Seattle.

There are a number of other explanations for the appearance of a never previously observed variety of HIV-2 in a blood sample collected from an eight-year-old boy, but the researchers suspect that their finding may illustrate that animal-to-human immunodeficiency virus infections continue to occur sporadically.

HIV-2 is not a particularly pathogenic virus in the majority of patients who acquire it; many people never develop clinical symptoms and it remains to be seen whether this variety is transmissible or will be a single ‘dead end’ infection – or indeed whether it is a viable virus at all.

HIV-2 is a separate immunodeficiency virus from HIV-1. Its animal host is the sooty mangabey monkey, which is native to a swathe of forest in west Africa stretching from Senegal to Ivory Coast. Sabina Locatelli of Montpellier University in France reminded the conference that there are eight known subspecies of HIV-2 (A to H), each representing a separate transfer of sooty mangabey monkey virus (SIVsmm) to humans: we know this because human HIV-2 species are as genetically distinct from each other as monkey varieties are, and are more similar to related monkey strains than to unrelated human ones. Only two HIV-2 strains, A and B, have given rise to more than single infections, and the nearest monkey precursors to five out of the eight strains, including A and B, have been found in the Taï National Park in southwest Ivory Coast.

The researchers therefore retrospectively tested 776 blood plasma samples, from 18 villages bordering the Taï National Park, for antibodies to HIV-1, HIV-2 and varieties of SIV seen in local species of monkey (not just sooty mangabeys). If samples were positive for antibodies to HIV-2 or SIV antigens, they were retested using a PCR viral load test to detect active viral infection. This is because the presence of antibodies could in some cases indicate nothing more than the presence of viral proteins, rather than active infection, in the blood. PCR-positive samples were then phylogenetically analysed to determine what strain of HIV-2 they belonged to.

HIV-1 was quite common in the villagers: 50 samples (7.8%) tested HIV-1 positive. Six samples (0.8%) were positive to HIV-2, which is close to HIV-2 prevalence in the area (about 1-2%). Three samples tested positive to antibodies to SIV species: one to a variety found in a colobus monkey and two to varieties from a mandrill. None of these three species were PCR-positive, indicating that the villagers’ bodies were reacting to passive transfer  of antigens from monkey viruses that had got into their blood, but that there was no active viral infection. The age of five of the six people giving HIV-2 antibody-positive samples ranged from 40-70, indicating that a historical wave of HIV-2 type A/B infection may no longer be being spread, as other studies have found.

Only three of the HIV-2 samples tested PCR-positive, indicating active infections. Of these, two were from known type A and B species, one in a 60-year-old man and one in a 40-year-old woman.

The third virus was a completely novel variety. It was much more similar to certain types of SIVsmm than to human varieties in its core p24 protein, though intriguingly its envelope gp41 protein appeared to mix human and monkey genetic sequences.

Furthermore it was found in an 8-year-old boy. Where did it come from? If it was HIV-1, the obvious conclusion would be from his mother, but mother-to-baby transmission of HIV-2 is virtually unknown, one of the factors that limit its spread. Another cause might be unsterilised medical equipment. But the most likely explanation appeared to be animal-to-human infection, especially since the three positive SIV antibody tests indicated that monkey viruses not uncommonly get into the human body – through scratches, cuts or bites – without causing infection.

Monkeys are often hunted: there is not only a large bushmeat trade in the local area, but small monkeys like mangabeys are also often kept as pets and a child might catch a monkey virus either from helping butcher a monkey or from a pet.

More samples need to be collected and analysed before we can be clearer where this virus came from, including testing the boy’s mother. We also do not yet know if this virus – if it indeed came from a monkey – is capable of human-to-human transfer. Its apparent recombinant nature is intriguing: was this a monkey virus with some human sequences that aided infection? Or successive HIV and SIV infections that recombined in the boy? But its presence shows that immunodeficiency viruses may still be migrating on occasion from animals to humans, and the high local HIV-1 prevalence shows that the conditions for their spread persist in many areas.

Ayouba A et al. Identification of a new HIV-2 lineage in rural Côte d’Ivoire: an additional cross-species transmission from SIVsmm from sooty mangabeys to humans. Nineteenth Conference on Retroviruses and Opportustic Infections, Seattle, abstract 62LB, 2012. The abstract is available on the official conference website.

A webcast of the session, Host and viral factors in HIV transmission, is available through the official conference website.

This news story is also available in French.

28 April 2021
The search for an HIV prevention vaccine

As the founding director of Visual AIDS, he helped develop campaigns including “Day Without Art” and, most notably, the ubiquitous red ribbon.
New York Times
5 May 21
HIV in the arts & media

Sarah Schulman’s “Let the Record Show” is a history of ACT UP, the AIDS Coalition to Unleash Power, based on 17 years of interviews with nearly 200 members of the organization.
New York Times
5 May 21
Harm reduction

‘The last brave thing that happened’: How the injecting room led the way on drug reform in Australia

The Kings Cross (Sydney) injecting room’s first medical director said she doubts the centre would have opened in today’s political environment as it was “the last brave thing that happened” in drug reform.
Sydney Morning Herald
4 May 21
People & personal stories

Diagnosed with HIV at 30, I am delighted to still be alive

Tony Whitehead: "When I tested HIV positive in 1985, I thought I was going to die – and my family did too. That’s what people thought back then."
Metro
28 Apr 21
Activism & civil society

The King of AIDS Treatments Is Turning to COVID-19