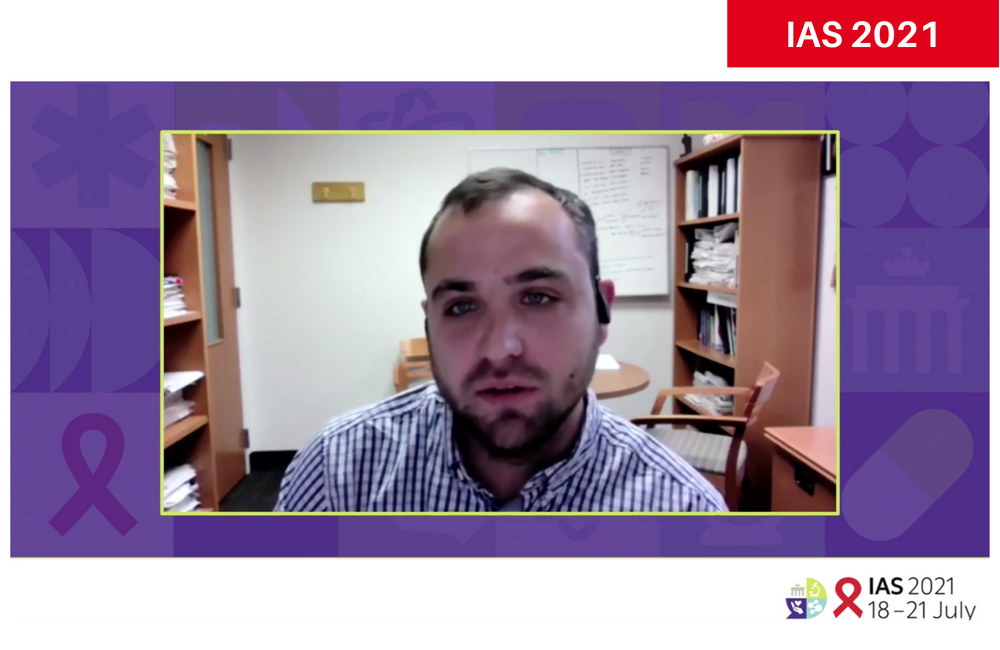 A dual therapy of two drugs that are antibodies not to HIV, but to host proteins that help to perpetuate HIV infection, has reduced viral load in monkeys chronically infected with a highly pathogenic monkey analogue of HIV, the 11th IAS Conference on HIV Science was told this week.

Zachary Strongin of Emory University in Atlanta, Georgia said that after the monkeys were taken off conventional antiretroviral therapy (ART), those that were receiving the two antibodies developed lower viral ‘rebound’ levels than those who were not. Nine out of ten of them reached undetectable viral loads while remaining on the antibodies.

Furthermore, seven of the ten monkeys remained completely or intermittently virally undetectable for ten more weeks after the antibodies were withdrawn.

The dual antibody therapy is not in any sense a cure or vaccine, as the monkeys had to be maintained on the therapy to ensure that it worked. There is no suggestion that HIV had been purged from their cells.

However, it leads the way to the development of a greater variety of experimental vaccines. In animal experiments, scientists have already developed vaccines that generate anti-HIV antibodies or that turn out virus-like particles that ‘look’ like HIV to the immune system.

In the present case, the two antibodies used each blocks the action of two different anti-inflammatory proteins, interleukin-10 (IL-10) and PD-1. These are dissimilar chemicals but they both dampen down the immune system’s inflammatory reaction to pathogens.

In HIV, while the virus causes chronic inflammation that dysregulates the immune system in untreated people, in people on ART that immune reaction, with the help of these so-called ‘immune checkpoint’ regulatory chemicals, is switched off. This renders the remaining HIV invisible to the natural immune controls that could get rid of it, as the body does with most other viruses. A ‘reservoir’ of HIV DNA is thus maintained deep within the nuclei of just a few immune cells per million, but this is enough to re-start viral replication as soon at the suppressive effect of ART is relaxed.

IL-10 is a cytokine, a small soluble protein secreted by certain immune cells that circulates in the blood. It is one of the most powerful anti-inflammatory proteins in the body and has been used experimentally to control auto-immune diseases like lupus and rheumatoid arthritis. PD-1 is a receptor, a larger protein that sits on the surface of immune cells and regulates their function – PD means ‘programmed death’ as in some cases it induces cells that have fought infections and reached the end of their useful lives to self-destruct. In most cases, though, its effect is to keep cells in stasis rather than to destroy them.

Inhibiting PD-1, in particular, has been investigated as part of the pathway to an HIV cure for well over ten years and existing PD-1 inhibitor drugs, already used in cancer therapy, have been part of the experimental HIV cure arsenal ever since.

These experiments have not been met with consistent success. It was discovered that IL-10 and PD-1, though they operate via different chemical pathways, can each compensate for the other if the action of one of them is inhibited. It therefore made sense to use antibodies that inhibit both of them.

The present study involved 28 rhesus macaque monkeys. They were all infected at the start of the study with a highly pathogenic variant of the simian immunodeficiency virus called SIVmac239.

The use of this virus is one of the hallmarks of this study. It typically gives rise to viral loads in the tens of millions in untreated monkeys and offers a much higher barrier to natural or therapeutic immune control than other viruses.

One of the problems with HIV cure and vaccine research is that experimental antibody-based drugs and vaccines have produced positive results in some subjects, but on further investigation only in the easier to neutralise 'tier 1' viruses. This was the part of reason behind the tantalisingly limited success of the RV144 HIV vaccine in Thailand in 2009 and the failure to replicate that success in South Africa in 2020.

The trial also presented a tougher challenge to the experimental medication in that the monkeys were kept on ART for 14 months, from the sixth week after they were infected to the 65th week, before the antibody therapies were started – and they were not taken off ART until 18 months after infection.

This mimics chronic human infection much better than animal experiments that use recently infected subjects, where immune control of the virus may more likely.

In a control group, eight moneys received ART until week 77 of the trial and were then taken off it but received no experimental medication. Observations were continued until week 91, 21 months after the trial’s start.

In a second group, ten monkeys received antibodies to IL-10 at week 65 of the trial. They were given as infusions every three weeks. The monkeys were taken off ART at week 77, but the anti-IL-10 was continued until week 85. After this was withdrawn, the monkeys were observed until week 91.

In a third group, ten more monkeys received antibodies to IL-10 at week 65, but then also started receiving antibodies to PD-1 at week 73. They also stopped ART at week 77 but the antibody therapies were continued until week 91, and the monkeys were observed for ten more weeks until week 101, nearly two years after the trial’s start.

The SIVmac239 infection initially produced peak viral loads ranging from six million to 75 million – far higher than in most human HIV infections. Most of the monkeys’ viral loads were still in the hundreds of thousands to millions range when they were started on ART. It took an average of 16 weeks to suppress the monkeys’ viral load to below 50, and in one case it took 45 weeks, but all were virally suppressed within a year.

Drug level measurements showed that the anti-PD-1 medication reached a plateau level in the monkeys after a couple of the infusions. Levels of anti-IL-10 were more irregular because the half-life of this antibody is shorter, but therapeutic levels were maintained. Levels of IL-10 circulating in the monkeys’ blood rose considerably because the antibodies were preventing it being absorbed into cells. Flow cytometry also showed that 99.5% of PD-1 receptor molecules on cells were blocked by that antibody. During the period the monkeys were on both antibodies and ART, there were no signs of their viral load becoming detectable, always a possibility with immune-stimulating medications.

In the control group, one monkey (12.5%) spontaneously managed to maintain an undetectable viral load. In the anti-IL-10 group, four (44%) remained undetectable; in the dual-antibody group nine (90%) did this, at least for part of the time (some became undetectable but then had a couple of detectable readings before, in the main, suppressing again). Time to the first undetectable result ranged from two weeks to 13 weeks.

In terms of blood tests rather than individuals, 8% of tests taken on monkeys in the control group after the ATI returned an undetectable viral load result, 26% in the anti-IL-10 group and 51% in the dual-antibody group.

In the dual-antibody group, two of the ten monkeys maintained an almost entirely undetectable viral load for the 10-week post-therapy period up until week 101, while one more maintained undetectability up until the last measurement, when its viral load was 1000. Four had irregular values with ‘blips’, ranging from undetectable to over 10,000 copies and back again over the ten weeks, and two maintained fairly low steady viral loads in the 1000 to 10,000 level. The last monkey was a complete viral ‘escape’; it never suppressed, and maintained a steady viral load off ART in the tens of millions.

No systemic side effects of the antibody therapies were seen, though there was some local mucosal inflammation.

At a press conference HIV cure expert Dr Steve Deeks commented that previous cure and vaccine studies had possibly set up false expectations by treating animals or people in recent infection and with tier one viruses. This study, he said, was a closer analogue to chronic infection with a virus that had already had more time to ‘escape’ host immune reactions.

The challenge now would be to develop a vaccine that could induce cells to produce their own antibodies to IL-10 and PD-1, he said.