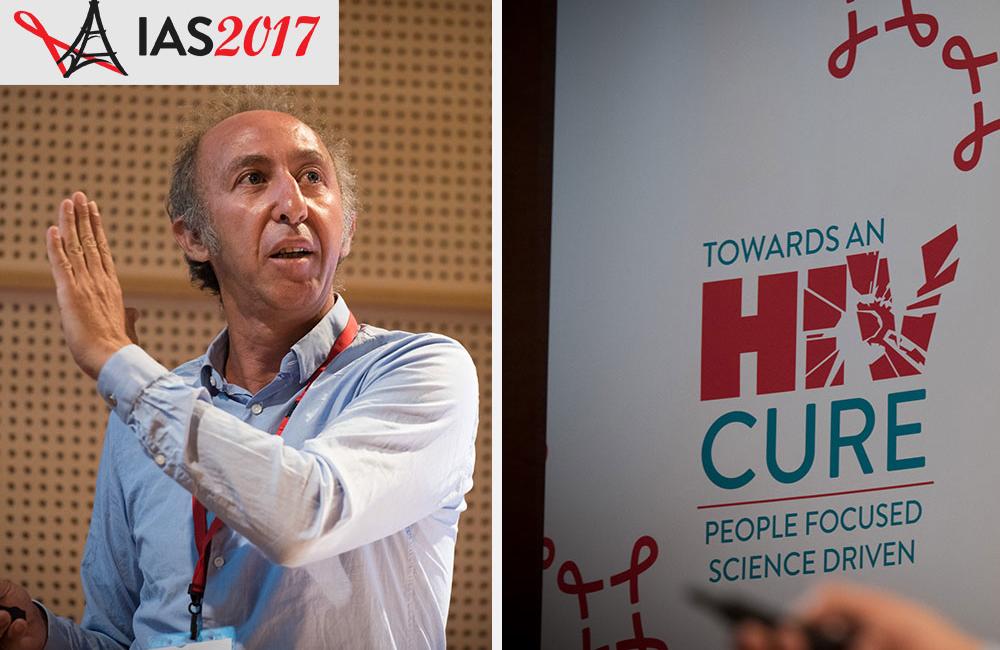 For the last few years, a specialist symposium on HIV cure research has preceded the International AIDS Society (IAS) Conferences and this one was no exception, with a 1.5-day Forum at Paris’s Curie Institute on the weekend the 9th IAS Conference on HIV Science (IAS 2017) opened.

This time round, there was a difference; this one was called the IAS HIV Cure and Cancer Forum. This is due to the dawning recognition that curing HIV and curing cancer have aspects in common, and that established or experimental cancer drugs may also have a part to play in curing HIV.

HIV and cancer: similarities and differences

There are many differences, of course, as Monsef Benkirane of France’s Institute of Human Genetics said in an opening lecture. HIV is caused by an infection and cancer by spontaneous misbehaviour by cells (though in some cancers, this may be set off by infections). Down in the heart of the cell, however, this issue is the same: cancer cells and HIV-infected cells harbour rogue genetic material that leads cells either to grow uncontrollably (cancer) or to derange the immune system (HIV). This means that they are both hard to cure: potentially, just one HIV-infected cell or one cancer cell can lead to a relapse.

It also means that the same tools that are now leading to a dramatic improvement in cancer cure and remission rates, including sophisticated drugs that target markers specific to cancer cells, could be used with HIV.

HIV-infected and cancer cells share one deadly trick. Cells with their rogue DNA can ‘de-differentiate’ when they are under attack, whether by drugs or the immune system. This means they retreat to an earlier stage of cellular evolution where they are invisible to the immune system. Benkirane said: “When you treat, you actually create new cancer stem cells”.

In HIV, something similar happens: energised immune cells that actively produce virus swiftly burn out, but a proportion return to a quiescent state, ready to spring into action again as soon as the pressure from antiretroviral therapy (ART) is eased. This is the “HIV reservoir”, and its identification and destruction (for a complete cure) or reduction/containment (for long-term remission) is the central barrier to be overcome if we are to find a cure.

The line of attack taken furthest by HIV cure researchers has used HDACs (histone deacetylase), drugs that ‘kick’ the sleeping genes in reservoir cells back into a state of wakefulness. The full strategy has been called ‘kick and kill’ as it has been hoped that the reservoir cells, once reactivated and visible to the immune system, could be killed naturally by immune responses or purged by antibody-based drugs that target them.

But repeated experiments with different HDACs have shown that, while they certainly wake up reservoir cells and turn them into short-lived virus-productive ones, they are unable to prevent new cells being ‘seeded’ with HIV and then returning to a quiescent state. The size of the reservoir cells therefore does not change significantly.

The drug targets we really need to work on are the cellular molecules that prompt the cell to stop whatever immune job it is doing and revert to its quiescent state. Both cancer cells and HIV-infected cells are particularly rich in these so-called immune checkpoint receptors. It is thought that their function is, when the body is facing a hostile environment ranging from viral proliferation to chemical attack, to sequester a proportion of the immune system away, so that not all of it is permanently damaged.

There are a number of different immune checkpoint molecules. Ones already targeted by some cancer drugs include CTL-4 (cytotoxic T-lymphocyte-associated protein 4), PD-1, where the PD stands for “Programmed Death” (one of the things PD-1 can do is make cells self-destruct), TIGIT (T-cell immunoreceptor with Ig and ITIM domains), and JAK (Janus kinase). These are all inhibitory molecules, putting cells into the reservoir state, though some like the TLR (toll-like receptor) family are excitatory, as the HDACs are, and TLR agonists (stimulators) continue to be under investigation as cell activators.

As with the HDACs, a number of CTL4, PD-1 and JAK inhibitors already exist as cancer drugs. These include the CTL-4 antagonist ipilimumab (prescribed under the brand name Yervoy for advanced melanoma), the PD-1 antagonists nivolumab (Opdivo) and pembrolizumab (Keytruda) which are used for advanced melanoma, small-cell lung cancer and kidney and bladder cancer, and the JAK inhibitors baricitinib (Olumiant) and ruxolitinib (Jakafi), which are used against a rare bone marrow cancer called myelofibrosis and also against auto-immune disorders such as rheumatoid arthritis and psoriasis. Some of these drugs have shown life-prolonging effects in cancers that used to be rapidly terminal.

The Cure and Cancer Forum heard about several experiments using these agents in cancer patients with HIV. Timothy Henrich of the University of California, San Francisco, a researcher who has previously produced spells of HIV undetectability off ART in two patients given bone marrow transplants, gave data from three patients with lung cancer and HIV who were given multiple doses of pembrolizumab.

Brigitte Autran of Hôpital Pitié Salpêtrière in Paris gave data from 12 patients with non-small-cell lung cancer who had been given nivolumab. They were a diverse group. One was a cisgender and another a transgender woman, the others were gay men. They were aged between 40 and 77 and had been diagnosed between 1980 and 2005. CD4 counts ranged between 60 and 700 cells/mm3. Most had viral loads below 20 copies/ml, though in two cases they were marginally detectable, at 34 and 53 copies/ml.

In one patient, the one with the lowest CD4 count, there was a significant T-cell rise and a rise in the proportion of cells with an HIV-specific immune response. In another, a rise in the HIV-specific immune response was accompanied by a significant decrease in intracellular HIV DNA. However, he was the only one who showed indications of a shrunken HIV reservoir and other immunological effects continuing after the course of treatment. Effects in other patients were slight and transient.

Christina Gavegnano of Emory University in Atlanta, Georgia presented data from animal studies of baracitinib in recently-infected monkeys and found that, compared with treatment with lamivudine, there was a 700-fold reduction in the number of non-dividing latent CD4 T-cells established in the body. The drug could possibly be used as an addition to ART that would slowly shrink the HIV reservoir to the point where a treatment interruption could be considered. A human trial of ruxolitinib in 60 adults (A5336) is underway.

Results with PD-1 and CTL-4 antagonists, and JAK inhibitors, have not so far been impressive, with only a minority of patients demonstrating strong or durable responses, if any. Sharon Lewin of the University of Melbourne said that interpreting PD-1 blocker studies in people with cancer is already difficult because cancers are heterogeneous and people with HIV who have cancer may not be representative of other HIV-positive people.

“We need to do studies in HIV-positive patients without cancer,” she said. “And we need to study combination therapies. But combinations of immune checkpoint inhibitors, while proving to have more powerful results in some cancers, are too toxic to use with people who only have HIV.”

In some studies of patients with melanoma, as many as 50% of patients had experienced severe or life-threatening side-effects or even death from the drugs when they were used in combination.

One thing that would help efforts to cure HIV and to use new types of drugs to eradicate HIV-infected cells would be if reservoir cells could be identified more easily. The proportion of central memory resting T-cells that are infected with HIV (the reservoir cells) ranges from one per thousand to one per million. So far, however, we have had no clear way to identify them – and that means no way to target these cells alone with drugs, and no other cells, which is the way to reduce toxicity.

In what might be the biggest news in cure research at the conference, it looks like that marker might have been found. Two different studies presented at the Cure Forum and at the main conference found that reservoir cells express much higher levels of a cellular receptor molecule called CD32a than other cells. While reservoir cells also express somewhat higher levels of other proteins, including immune checkpoint receptors and the CD2 molecule, this is the first time such a strong association has been found.

Genevieve Martin of the University of Oxford told the Forum, and in a conference presentation, that levels of CD32a were no higher generally in people with HIV than in HIV-negative people, with about 1.5% of immune cells in general expressing it. But in people with HIV, reservoir cells had from 100 to 1000 times as much of the molecule expressed on their surface; and these cells were also likely to be enriched with PD-1 and other immune checkpoint receptors.

Go to part two of the report