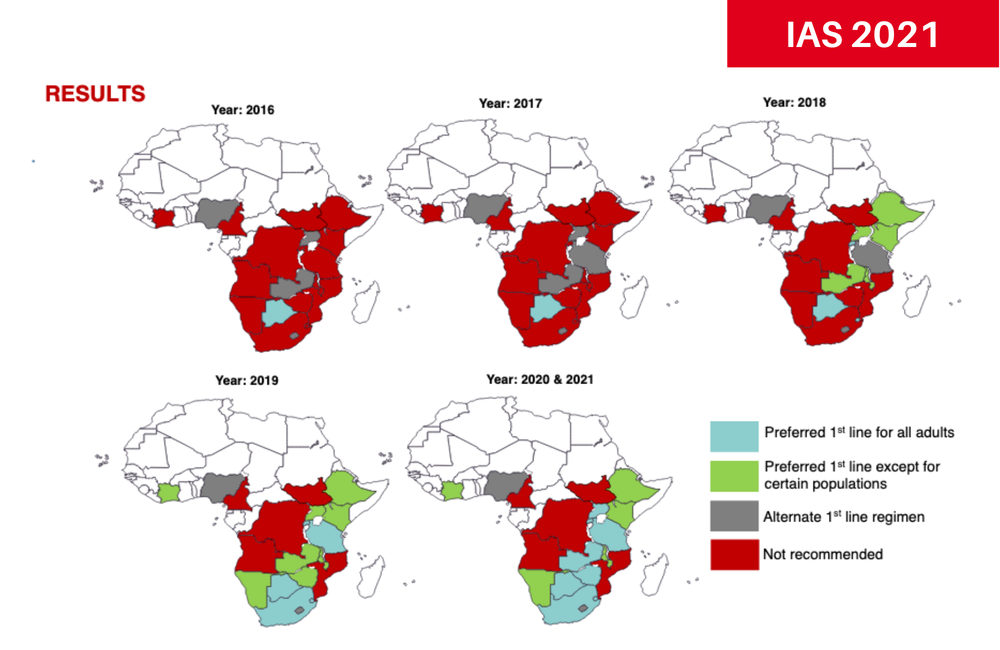 Although dolutegravir has been recommended by the World Health Organization (WHO) as part of first-line HIV treatment for all adults since 2019, less than half of the African countries with the highest burden of HIV follow these guidelines, according to an analysis presented to the 11th International AIDS Society Conference on HIV Science (IAS 2021)  today.

With its high barrier to resistance, virological potency, superior side-effects profile and lower cost, the integrase inhibitor dolutegravir represents an improvement on previously recommended medications. Its first regulatory approval was in 2013, and in 2016 WHO recommended it as part of an alternative first-line regimen.

However, preliminary data on a possible raised risk of neural tube defects (a type of birth defect) from a study in Botswana in May 2018 led to safety warnings from international regulatory agencies. That summer WHO recommended dolutegravir for women of childbearing age only if reliable contraception were available. Roll-out of dolutegravir in many countries slowed or reversed.

Follow-up data from the Botswana cohort and elsewhere has tempered concerns about dolutegravir’s safety in pregnancy. In July 2019, WHO updated its position and recommended dolutegravir as part of the preferred first-line HIV treatment for all adults, including women of childbearing age. However the concerns and hesitancy appear to have had long-lasting effects.

Somya Gupta and Dr Reuben Granich examined treatment guidelines published by the 20 sub-Saharan African countries with the greatest burden of HIV (covering 94% of people with HIV in the region). As of this month:

However some conference delegates commented that the study was not based on the latest information. “Country guidelines don’t necessarily reflect up to date policies and practice,” commented Dr Catherine Godfrey and a group of PEPFAR technical advisors. “Circulars and other non-guideline communications are commonly used for rapid policy shifts. Many of the countries you cite use TLD [tenofovir disoproxil/lamivudine/dolutegravir] as first line therapy.”

“The 2018 WHO false alarm and ensuing confused messaging about safety stigmatised dolutegravir and may have contributed to the ongoing delay in adoption of dolutegravir in Sub-Saharan Africa,” conclude Gupta and Granich. They call for speedier processes to translate scientific knowledge into policy and services.

This article was updated on 21 July 2021 to include the comment from Dr Catherine Godfrey.