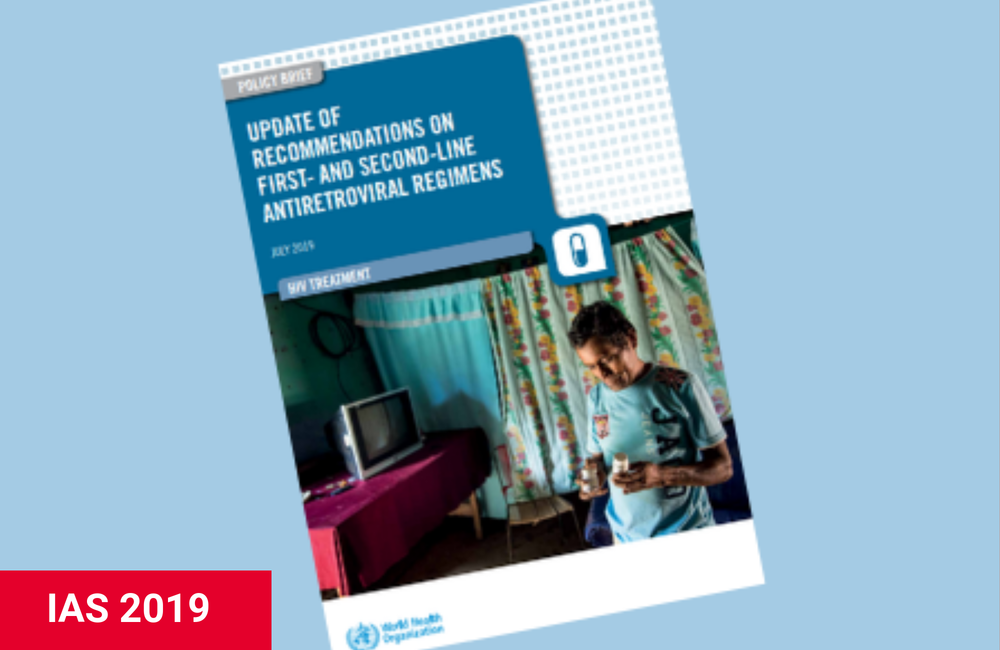 Everyone who starts HIV treatment in lower- and middle-income countries should start treatment with a combination containing dolutegravir, the World Health Organization (WHO) announced at the 10th International AIDS Society Conference on HIV Science (IAS 2019) in Mexico City today.

The new recommendations from WHO are unambiguous. Dolutegravir-based antiretroviral therapy (ART) is recommended as the preferred first-line regimen for all adults and adolescents with HIV. This is classified as a ‘strong’ recommendation by WHO, meaning that if countries ignore it, they are going against compelling evidence that dolutegravir-based ART is now the best-available first-line regimen.

Whereas WHO previously recommended efavirenz 600mg, it now supports the lower dose of 400mg which has benefits in terms of side-effects and cost.

The new recommendations stress the importance of switching to dolutegravir in settings where resistance to non-nucleoside reverse transcriptase inhibitors (NNRTIs) is rising. Dr Silvia Bertagnolio told a symposium organised by WHO that resistance to NNRTIs is present in over 15% of people starting antiretroviral treatment in Uganda, 20% in South Africa and over 25% in Honduras. Use of efavirenz in these settings is likely to result in treatment failure and further transmission of drug-resistant virus.

Implementing the recommendations is an urgent priority for countries as they work towards achieving the UNAIDS 90-90-90 targets – 90% of people living with HIV knowing their status, 90% of those diagnosed being on antiretroviral therapy and 90% of those on treatment having viral suppression by 2020. Dolutegravir-based treatment has the potential to be cost-saving, better tolerated – leading to better retention in care – and more potent, meaning that fewer people will need to switch to more costly second-line regimens.

The President’s Emergency Plan for AIDS Relief (PEPFAR) has been pushing hard to promote a transition to dolutegravir in all the countries where it funds treatment. However, the concerns over dolutegravir safety led many countries to halt dolutegravir introduction until they had more data.

PEPFAR’s planning for the transition to dolutegravir projected that by this point in 2019, 80-90% of patients would have transitioned to dolutegravir or started treatment on a dolutegravir-containing regimen. In practice, countries are falling far short of these targets as a result of last year’s decisions to restrict women’s access to dolutegravir.

Ambassador Deborah L Birx, US Global AIDS Coordinator and US Special Representative for Global Health Diplomacy, criticised the way in which concerns over dolutegravir safety had resulted in denial of dolutegravir treatment to women in numerous countries.

“If we move policies forward with the speed we shut down access to dolutegravir for women”, the epidemic would be over, Birx told the WHO symposium. “It was shocking.”

“We were saying we have a client-centred approach, but we did not when it came to dolutegravir, so let this be a reminder of where we need to be in the future.”

Jacque Wambui of AfroCAB, an activist living with HIV, said that women need to be allowed an informed choice by health systems. “It is my body, my pregnancy, I am the one who is going to bear the child for nine months. Let the woman know what the risks are, and let the woman decide for herself.”