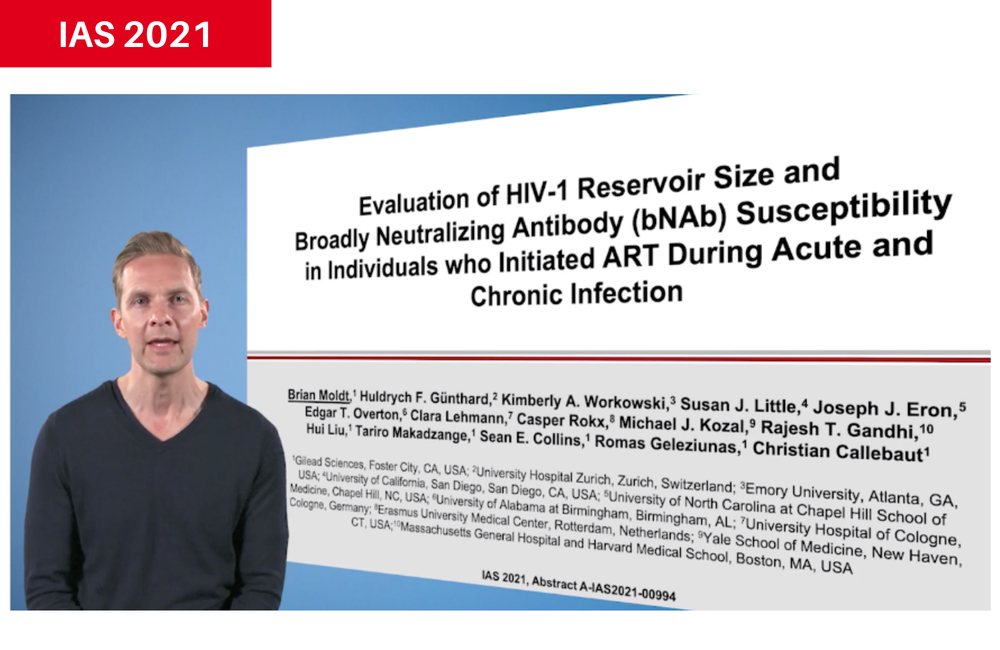 People who start antiretroviral treatment early, before they develop extensive immune system damage, have a smaller HIV viral reservoir, which may improve prospects for a functional cure, according to studies presented this week at the 11th International AIDS Society Conference on HIV Science (IAS 2021).

Very soon after initial infection, HIV establishes a lasting reservoir of inactive virus in long-lived resting T-cells. While antiretroviral drugs can control viral replication, they do not eliminate these latent viral blueprints, which can resume virus production when treatment stops – the key barrier to a cure for HIV.

Professor Edwina Wright of the University of Melbourne and an international team of colleagues looked at the association between CD4 T-cell count and viral reservoir size in people who began early antiretroviral therapy (ART) in the START (Strategic Timing of Antiretroviral Treatment) trial.

As reported at the 2015 IAS conference, START showed that people who initiate treatment with a CD4 count above 500 cells/mm3 have a significantly lower risk of illness and death than those who wait until it falls below 350. These findings led to a change in global treatment guidelines to recommend ART for everyone diagnosed with HIV, regardless of CD4 count.

In this substudy, Wright and colleagues compared the size of the viral reservoir in people who started treatment with a CD4 count of 500-599 (36 participants), 600-799 (60 participants) or more than 800 (50 participants) at the time of enrolment. A majority of these participants (60%) were women, most were Black and the median age was approximately 40 years.

The researchers also noted that older people and women had lower total HIV DNA levels than younger people and men, but the association between lower total DNA and higher CD4 count at ART initiation remained after adjusting for these and other factors. However, when looking at women and men separately, the association was no longer significant for the men.

"Collectively our findings indicate people with HIV who maintain CD4 T cells ≥800 cells/mm3 before ART initiation are endowed with an enhanced capacity to eliminate latently infected cells and may constitute a subgroup that could potentially benefit from interventional cure studies," they concluded.

In another study, Dr Brian Moldt of Gilead Sciences and colleagues compared viral reservoir size and diversity, as well as HIV's susceptibility to broadly neutralising antibodies (bNAbs), in people who started ART at different stages of infection. Currently being studied in HIV treatment, prevention and cure research, bNAbs are able to recognise conserved parts of the virus that change little across strains.

The study enrolled people in four cohorts based on when they started ART: Fiebig stage I or II (when HIV RNA and the p24 antigen can be detected), Fiebig III or IV (when HIV antibodies are first detectable), late acute infection (three months or less) and chronic infection (over six months). The cohorts included 16, 17, 14 and 17 people, respectively. More than 90% were men, they had been on ART for three to five years and CD4 counts were high (approximately 700 to 900).

The participants underwent leukapheresis, a procedure in which blood is drawn, white blood cells are removed, and the rest of the blood is returned to the body. Through this, the researchers collected a sample of peripheral blood mononuclear cells (T cells and other immune cells). The viral reservoir was measured in these cells using the intact proviral DNA assay, total HIV DNA assay and quantitative viral outgrowth assay. Susceptibility to Gilead's investigational bNAb elipovimab was determined by genotyping of the HIV envelope gene.

"Individuals initiating ART during Fiebig I-IV would be an optimal target population for proof-of-concept cure trials due to smaller, less diverse HIV reservoirs," the researchers concluded.

Finally, Dr Caroline Passaes of Institut Pasteur in Paris presented results from a study of early antiretroviral therapy and post-treatment control – the ability to maintain viral suppression after stopping therapy – in macaque monkeys.

Dubbed pVISCONTI ('p' for primate), the study used a non-human primate model to assess the impact of early versus late ART initiation on immune responses and outcomes after treatment interruption. The aim is to learn more, under standardised conditions, about the factors underlying viral control seen in people in the French VISCONTI cohort and in other post-treatment controllers.

The researchers looked at monkeys infected with SIV – HIV's simian cousin – comparing 12 animals that started combination ART during primary infection (28 days after exposure), 12 that started during chronic infection (six months post-infection) and 17 that remained untreated. ART continued for two years, then the monkeys were monitored for another six months to a year after treatment interruption. Plasma viral load, CD4 T-cells levels and CD8 T-cell responses were measured throughout the study.

Viral rebound (defined as more than 1000 copies/ml) occurred sooner in those that started treatment during chronic infection compared with primary infection. What's more, 82% of the monkeys in the primary infection group achieved post-treatment control (defined as a viral load below 400 copies/ml) at the end of the study period, compared with 25% in the chronic infection group and 12% in the untreated group.

The researchers also noted that anti-SIV CD8 T-cell activity, which was weak at the time of infection, increased after treatment interruption – particularly in monkeys that started ART during primary infection – and was stronger in post-treatment controllers.